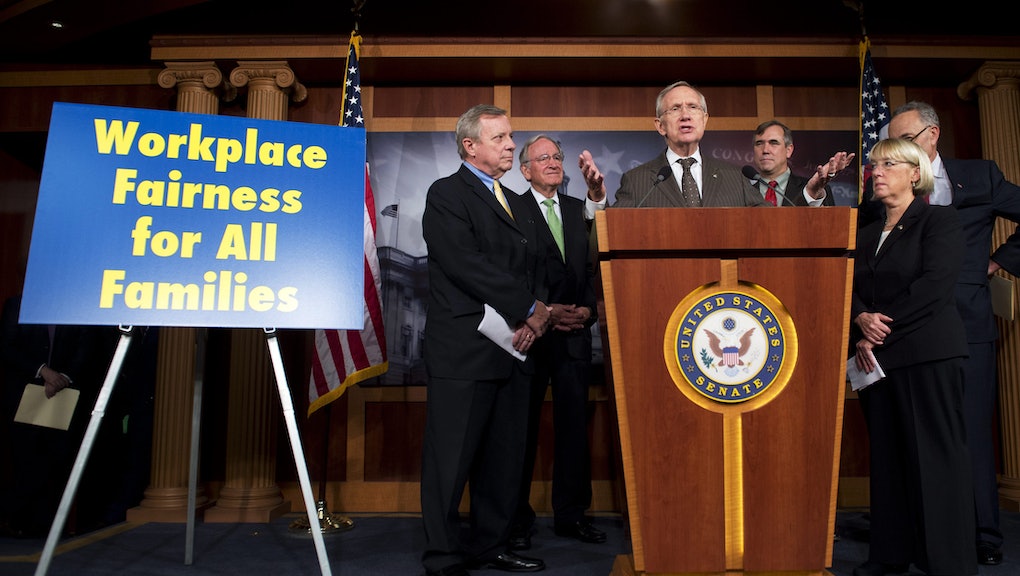 Why Every Gay Marriage Supporter Should Fight Against ENDA

Last week, the Senate passed the Employment Non-Discrimination Act (ENDA), which would prohibit employers from discriminating on the basis of sexual orientation. The law is being held up as a victory for gay rights, but ironically, it also violates the core idea that's caused so many people to support legal same-sex marriage: the notion that each person owns themselves and should be able to peacefully do what they wish. Since governments have no right to tell people whom they should or shouldn’t marry, it ought to follow that governments have no right to tell companies whom they should or shouldn’t hire.

We may disagree with a prejudiced company refusing to hire someone merely because they’re gay, and we’d be on the moral high ground. But disagreeing with the company and forcing them into an action are entirely separate matters. They’re offering the job. It’s their business and their property. In this light, ENDA reveals itself as an ugly anti-property-rights law.

Anti-discrimination laws are premised on the idea that if jobs are an entitlement. But if jobs are a right, someone else has to provide them. And by being required to provide that job, an employer's self-ownership right is violated. It's somewhat similar to the idea that housing is a "fundamental right." Obviously, society should work to house as many people as possible. But if housing is a "right," that means that if I need a house, someone must provide me with one — in other words, they must exert effort to provide a good or service to another person, whether or not they want to. "Rights" like the right to housing or the right to a job are incompatible with the concept of self-ownership.

Someone defending ENDA might say, “The government is simply preventing employers from discriminating; they’re just preventing a bad action.” But the outcome of hiring discrimination is that the job candidate is not offered a job, which the candidate had no entitlement to anyway — in other words, the employer is published not for their actions, but for something they did not do.

Besides, the market already punishes those who unjustly discriminate. If a landlord refuses to rent to people of certain ethnicities, he or she is losing out on potential customers. If a company is sexist against women, it’s losing out on hiring potentially great employees. Who, other than blacks, was among the strongest opponents of the racial segregation of streetcars in the South? The streetcar companies, who simply wanted more customers. They disliked segregation laws so much that they refused to enforce them for as long as 15 years after the legislation was enacted. Who, other than black workers, were some of the people most strongly opposed to South African Apartheid? The largely white employers who wanted to hire them.

In fact, ENDA might even make it more difficult for gay individuals to get hired. The law would create many false positives of discrimination. These would be cases where the employer wasn’t bigoted, but for some reason chose not to hire a gay person and was then legally penalized for it. The threat of legal trouble will make all employers a little less eager to supply jobs, making it more difficult for everyone to get hired.