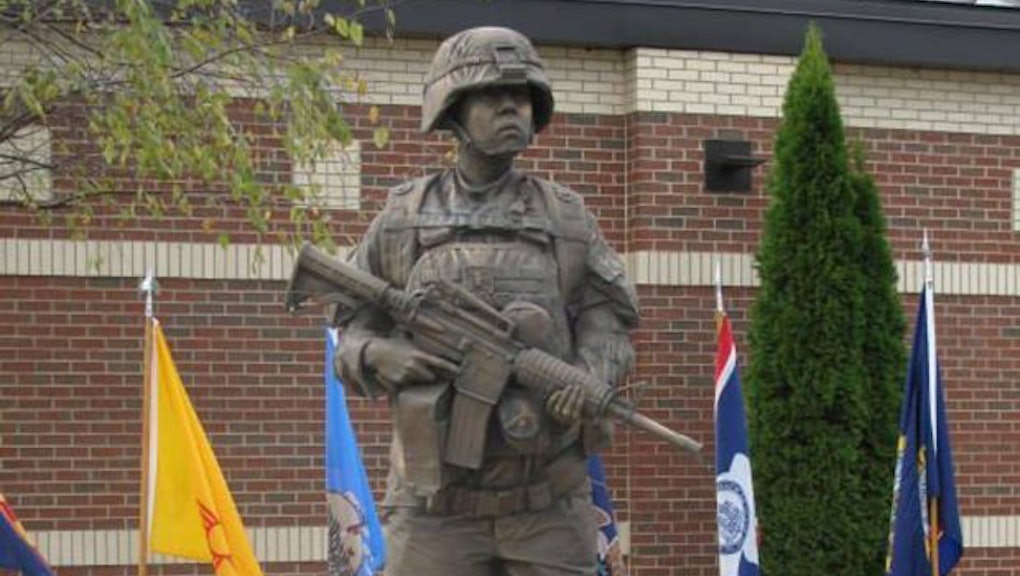 Why Did It Take Until 2013 to Get an Official Statue Of a Female Soldier?

For the first time in the last 36 years of women serving in the U.S. Army, there is a statue on a military base featuring a female soldier. The Lt. FAWMA (Friends of the Army Women's Museum) statue was unveiled last week in Fort Lee, Va. just in time for Veteran's Day.

But two weeks ago, the first statue recognizing the sacrifices of dogs in combat was dedicated by the U.S. Army.

The national monument commemorating military dogs was erected at Lackland Air Force Base in San Antonio, Texas, where dogs have been trained for the military since 1958. It was funded by private donations (whereas the women's statue was commissioned) and features the four major breeds of dogs that have been in the military since World War II.

John Burnam, who has written two books about combat dogs, came up with the idea for the statue after handling military dogs in Vietnam. "Dog units are worth a million dollars for everything they do ... You can't say enough, you can't give enough accolades to them."

Apparently the same is not true of female soldiers. Women have been serving the United States military in various unofficial capacities since the Revolutionary War and have a long history of not being recognized for their service, which should make us even more inclined to commemorate it now. Women first officially served in the Woman's Army Corps from World War II until 1978, at which point they began enlisting in the regular military. In January, the Pentagon lifted the ban on women in combat, signaling the integration of women into the armed forces as equals.

While women may work as equals, they're not recognized as such. The U.S. Army could do better than a sad, nondescript statue (can you even tell that's a woman?) to honor the hundreds of thousands of women who have served. While it's hard to quantify how many statues representing male soldiers sit on U.S. military bases, we do know that there is exactly one for female soldiers. And one for canine soldiers.

While the U.S. military is undergoing a serious reevaluation of the way they treat sexual assault charges, it is time to seriously think about how we recognize our female armed forces.