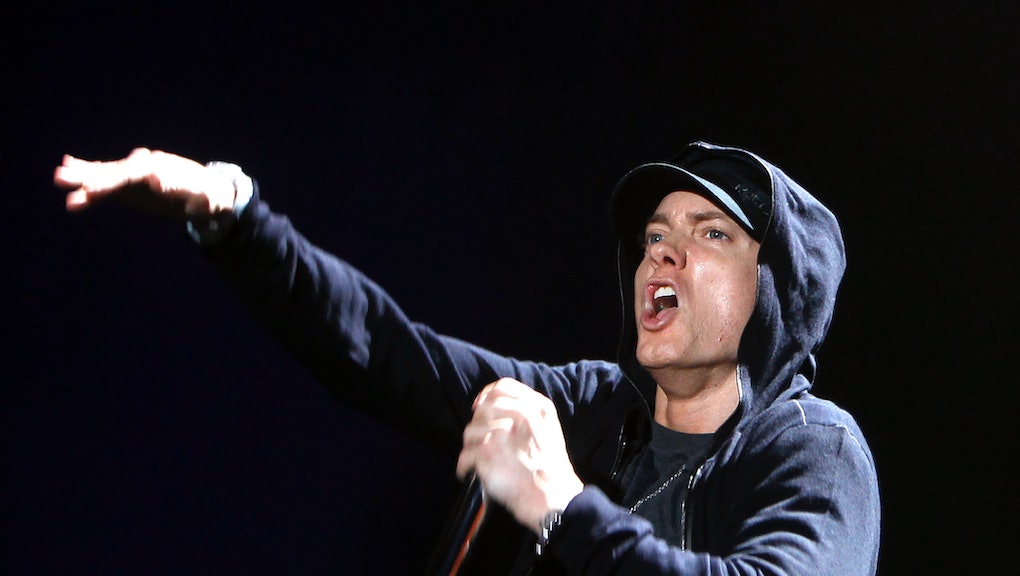 5 Reasons Why Eminem Will Never Be My Icon

This weekend, Eminem was awarded the "Global Icon Award" at the MTV EMAs, leading me to ask myself, "Why won't Eminem just go away?"

Confession: I wasn't allowed to listen to Eminem growing up. I totally credit my mother with this decision now, knowing that she did indeed know best in making me avoid the sexist shitshow that was his entire career in the early 2000s (and is his entire career now). In fact, even as I got older, I noticed a specific lack of interest in ever hearing a word Slim Shady felt necessary to let out of his mouth. I waited for him to fade away.

In my world, white dudes who whine about "being picketed against" aren't worth paying attention to, nor are men who refuse to accept the importance of the women in their lives. But for some reason, Eminem maintains an international audience and has, as of late, set and matched records in the recording industry for sales and plays through the years. It's not that Eminem is awkwardly rapping on despite being irrelevant. It's that the man who performed a song about strangling his girlfriend in front of her at a concert actually remains one of the most popular artists on, well, Earth. And that's just plain frustrating.

I think of Eminem, honestly, as a case study in straight, white, male privilege. As I've entered the real world, I've come to see that one of the best parts of male privilege is getting away with incredibly unacceptable shit, maintaining the respect of others in the meantime. (Examples that come to mind are the crack-smoking Mayor of San Diego Bob Filner's long-standing refusal to step down after being accused of sexual harassment by over 10 women, and Roman Polanski's life.) Eminem's been bringing this realization to the forefront for decades now, proving that no matter how many pieces of our collective humanity he disrespects, destroys, and violently attacks, he's stickin' around.

Eminem isn't a global icon. He's just a 41-year-old man with a longstanding aggression problem who refuses to grow up. The prospect that he's been named an "icon" and continues to book shows and sell albums speaks to an entire world in disarray. Everyone supporting Eminem's career should please stand up... and then walk the fuck off the planet.

MTV, we can do better. Accepting someone as an "icon" simply because they won't GTFO is lazy and irresponsible, but I'm all out of ideas as to who should have been bestowed with the honor on Sunday. Instead, I've got a few solid reasons why this weekend never should have happened, which also double as explanations for why Eminem's douchebaggery isn't worth ignoring for the sake of his angry star power.

1. Because He Doesn't Respect Christina, Or Anyone, Really.

When Christina Aguilera and her sister told MTV Eminem was cute but "girls need to watch out for abusive guys," Eminem responded in-kind by recording "Off the Wall," in which he says: Causin' terror to Christina Aguilera / When I grab her by the hair and drag her across the Sahara.

The "feud" continued on the single "The Real Slim Shady," where he raps:

Eminem's feud are plenty. They have their own Wikipedia page. His feud with the Insane Clown Posse (literally over a flyer) escalated into gun play, almost landing him in jail. He claimed in many songs to have a relationship with Mariah Carey, which she denies. When Moby called him out for being sexist, he told him, "Blow me."

Eminem's main gimmick is getting attention by being a total asshole, making him everything that's wrong with contemporary American masculinity.

2. Because He Explicitly Endorses Violence, Particularly Violence Against Women.

The Marshall Mathers LP 2 proves one thing: "Eminem hasn't changed." It's been almost 20 years since Eminem released his first album, but he's still just as obsessed with encouraging violence — violence against women in particular.

In Eminem's world, violence is a "punishment" for folks who piss him off and women who "disrespect him." (Posing the ultimate question: Can a woman ever disrespect a misogynist enough?) His latest album includes odes to killing women with machine guns, which is a violent upgrade from his year 2000 ideal of choking a "slut" to death. Lucy Jones accurately summed it up in her piece on his latest release:

Pulling Eminem up on his depiction of women is nothing new and the word ‘misogyny’ is often loosely bandied around the rapper. What does the word even stand for today? If we take it in its simplest form to mean 'the hatred of women’, Eminem’s guilty. In the quotes above he legitimises violence against women, demeans them as subordinate, and deserving of physical harm if they cross him.

3. Because His Vocabulary Is Limited (and Awful).

It's 2013, and Eminem's got plenty of cushy record deal time to edit his music. So why won't he drop the f-bomb? I'm not talking about everyone's favorite four-letter-word; I'm talking about an anti-gay slur that lives on in Eminem's immediate repertoire.

Eminem insists he doesn't hate gay people, which is laughable considering he continues to denigrate and abuse us in his lyrics. If Eminem's raps express anything about his real life, it's his ongoing contempt for gay folks  — men in particular — who define his very existence.

"People walk away from the record for what it is and that language is violent in a very particular way," GLSEN Executive Director Eliza Byard said in an interview with MTV about the EMA Global Icon honor this year. "And it's dangerous. And it has an effect on young people and we see that effect every day — it's our job to try to deal with it. And this record doesn't help."

4. Because He Wants to See His Mother Burn In Hell.

In perhaps the most thankless ode to a single mom the world has ever seen, Eminem buries his mother in a metaphorical grave in the rain, wishing her well on her journey to hell.

We can talk the validity of open, honest discourse on parents who failed us all we want, but those experiences don't justify the use of violent imagery and lyrics (again and again and again, no less). Period. We already know that violence is never the answer, and to see a grown-ass man perpetuating death fantasies about his mommy is plain old sad shit. But the effects can be far-reaching, and that's where it goes from sad to dangerous. Jackson Katz, a famous male feminist, wrote:

It is hard to say what percentage of the Eminem faithful relate to his oft-articulated rage at his mother. But consider this anecdotal evidence. I attended an Eminem concert in southern California during the "Anger Management" tour a couple of years ago. At one point, Eminem ripped off a string of angry expletives about his mother, (something like "F-you, bitch!") after which a sizable cross-section of the 18,000 person crowd joined in a violent chant repeating the verbal aggression against Ms. Mathers (and no doubt other mothers by extension.)

Why is this aspect of the Eminem phenomenon such a cause for concern? No one begrudges Eminem, or anyone else, the right to have issues – including in some cases being very angry with their mothers. But it is not a great stretch to see that Eminem's anger can easily be generalized to all women – tens of millions of whom are mothers -- and used as yet another rationale for some men's deeply held misogyny.

Considering Eminem's (and his mother's) roots on the economic margins of "white trash" Detroit, class is also a critical factor here. Poor women – especially poor women of color -- are easy scapegoats for many societal problems. Eminem's fans presumably know little about the context within which Debbie Mathers (who is white) tried to raise her kids. Might we have some compassion for her as we are asked to for him?

5. Because He Proudly Rapped About Killing Kim ... Many Times.

Eminem's song "Kim," on the 2000 Marshall Mathers LP, is one of the most misogynistic, disgusting, horrifying pieces of music in all time. Period. But perhaps even more notable than simply birthing a song about brutally murdering the mother of your child is following it up with a live performance of the entire mess with blow-up dolls with which to act it out — which Eminem did, all the while knowing real-life Kim was in the stands. She attempted suicide shortly after.

The terror doesn't stop there. Eminem has touched on the theme in other songs from a variety of albums, including the 1997 song "Bonnie & Clyde" where he raps about taking his daughter to a lake to dump Kim's dead body.