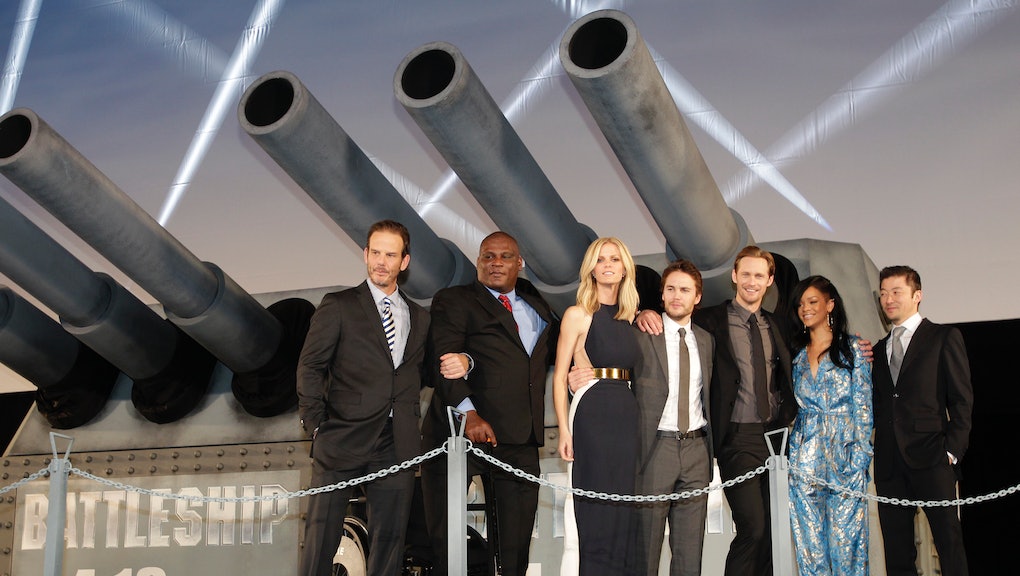 (While the study doesn't cite them in particular, the Transformers sequels have clearly bolstered this trend, proving that Michael Bay's work isn't just cinematic garbage, but is deleterious to society as a whole.)

While the study airs concerns about the "weapons effect," which claims that viewing or just hearing a mention of guns increases aggression in behavioral studies, the researchers' results also provide an opportunity to revisit the Motion Picture Association of America's (MPAA) arbitrary rating system. After all, according to the MPAA, blood, gore, and explosions are inherently family-friendly, while lady nipples are an affront to everything that we, as Americans, hold sacred.

Founded in 1922, the MPAA — the trade organization where Chris Dodd got a job after a fly died on his hair — famously implemented the Hays Code, which determined what, for the sake of propriety, could and couldn't be depicted in Hollywood cinema. (It's why there are so few classic movies about gay drug-trafficking nudist priests who are into miscegenation and edgeplay.) In 1966, MPAA President Jack Valenti began reforming the production code, and in 1968, the organization introduced letter ratings determined by an opaque system of focus groups. Despite the secrecy surrounding them, and the fact that they're "voluntary," the MPAA's ratings have an outsize impact on the availability and profitability of films.

Daniel Romer, a researcher at the Annenberg Public Policy Center of the University of Pennsylvania, told the New York Times that movie studios have been "taking films that have a lot of violence and putting them into the PG-13 category" while relegating non-violent films that feature nudity or sex to the R category. In the MPAA's view, the mere existence of pubic hair is a greater threat to our children's well being than flesh-eating raptors, mass-murdering supervillians, dystopic survivalism, or the entire Twilight series (which may not have had gun violence, but almost certainly causes brain damage).

It's worth asking why we, as a society, are comfortable exposing young people to explosions and bloodshed, but not nudity, or, god forbid, hearing two f-bombs in a single feature-length film. Perhaps it's time for the MPAA to reassess its ratings system, and provide greater transparency into its process. Or, perhaps, given the MPAA's misalignment with contemporary values, and the wide availability of online reviews and criticism, the ratings system's time has now passed entirely.