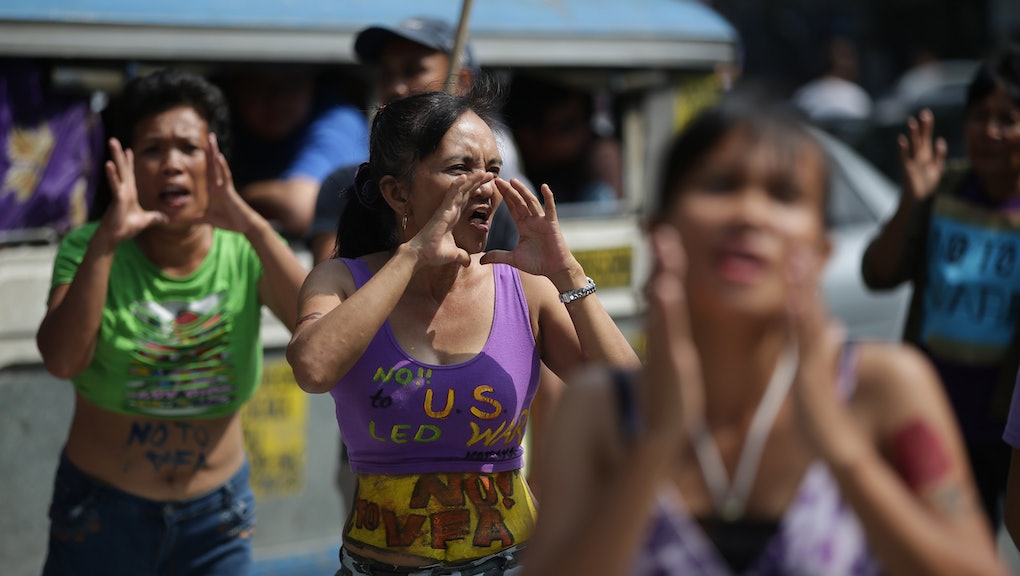 Recently, Colombian women decided to withhold sex from their significant others until a deteriorating highway is fixed, but this is by no means the first time women have leveraged sex for political change. Women in countries as diverse as Canada, Togo, Belgium, Kenya, Italy, and the Philippines have employed the same tactic in the recent past to bring about political change. While not all of these protests have been successful, they offer a platform for political and sexual empowerment that cannot be ignored.

In the 21st century, many women in economically and socially troubled societies have enacted changed by withholding sex. The most notable example is that of Filipino women from rural areas who ended clashes in July, 2011 by withholding sex from their men.

The island of Mindanao had been staging a separatist rebellion since the 1970s. That is when the women of a sewing cooperative, supported by the United Nations high commissioner for refugees, decided to engage in a non-violent protest through sex.

According to UNHCR reports, "within weeks of the strike starting... the main village road re-opened and the fighting stopped. The women of the sewing cooperative along with other villagers were able to deliver their goods and start to rebuild the economy."

2. Togo's Women Try to Bring Down the President With Sex

Let's Save Togo was a 2012 protest launched by opposition leader Isabelle Ameganvi to encourage women countrywide to withhold sex as long as President Faure Gnassingbe remained in power.

Gnassingbe was appointed president when his father, Gnassingbe Eyadema, died after ruling Togo as a dictator for 38 years. While the women did not succeed, their protest brought worldwide attention to the improprieties of the Gnassingbe dynasty.

3. Sudanese Women Withhold Sex to Save Their Children

Former university Prof. Samira Ahmed kicked off a sex boycott that spread to thousands of women in Sudan's Upper Nile region in 2002. While it's hard to know exactly how successful the movement was, the country's 22-year civil war finally came to end several years later. "Women decided that by withholding sex from their men they could force them to commit to peace — and it's worked," said Ahmed.

Ida Odinga, the wife of Kenyan Prime Minister Raila Odinga, participated in a May, 2009 sex boycott until the country's leaders addressed issues of violence and Kenya's diminishing credibility with the international community. Proving that withholding sex is not relegated to lower-income women, the wives of politicians in Kenya brought nationwide attention to major issues. Their boycott led to the creation of a 90-day plan that set out to review the performance of governing leaders more closely.