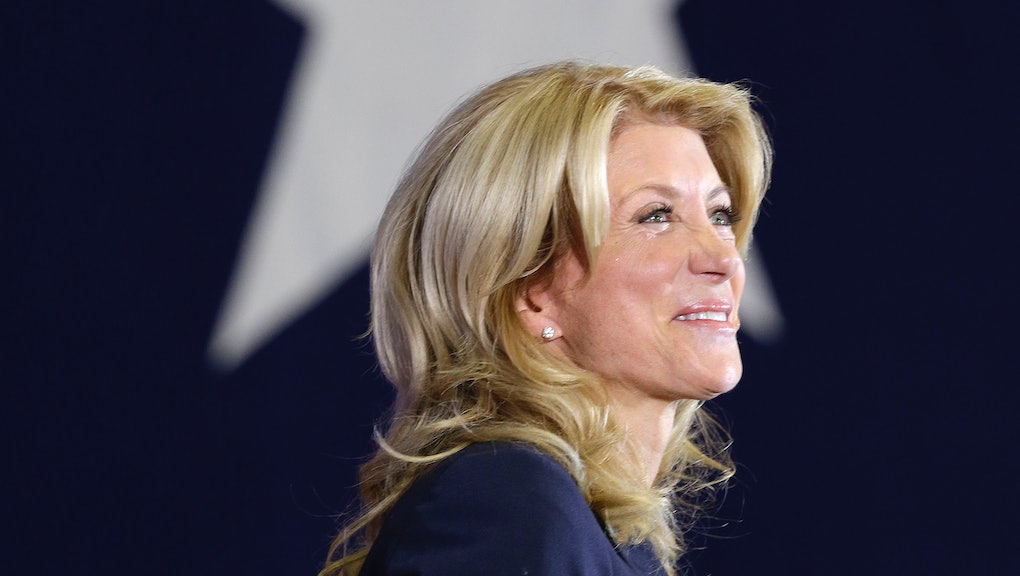 During Joe Biden’s long-shot 1972 campaign for Senate against two-term incumbent Cale Boggs, Biden's sister and campaign manager Valerie had the motto “to know him is to love him.” No venue was too small for Biden; he campaigned at public beaches, high schools, and small town Rotary Clubs. The more voters learned about the then-29-year-old candidate, the more they liked him.

The opposite has been true for Wendy Davis. Like Biden, she is trying to pull off an unlikely political upset — defeating popular Republican Greg Abbott in one of the reddest states in the union. Unlike Biden, the more voters learn about Davis, the less they like her.

According to a poll released last week by Public Policy Polling, Davis trails Abbott by 15%. The most favorable poll for Davis has her losing by 6%, and no poll has shown her with a lead. The polls in which Davis does better feature a higher number of undecided voters, who traditionally end up supporting the candidate from the party they usually support. In Texas, that means the Republican candidate.

Davis’s weak poll numbers are expected given how much her political identity conflicts with Texas' political climate. A pro-choice hardliner adored by the Democratic establishment would be an ideal Senate candidate in a heavily Democratic state. In Texas, that identity makes Wendy Davis as unelectable as Ted Cruz would be in Massachusetts. Just as Ted Cruz became known to apolitical Americans by filibustering Obamacare funding, Davis became known to average Texans by filibustering a law they supported.

As first introductions go, it was a terrible one: 46% of Texans want abortion to be illegal in all cases except for rape, incest, and to save the life of a pregnant woman. Only 36% think abortion should be a “matter of personal choice.” Most importantly, 62% of Texans supported the anti-abortion bill that Davis became famous for filibustering. An effective Democratic candidate in Texas would be pro-life. At the very least, they would run away from their position on abortion and describe it only in vague platitudes.

Davis is now trying to follow that playbook. Her commercials don’t mention abortion, and she’s even described herself as pro-life (though that's based on a modified definition of the term). But that messaging will be a Sisyphean task. Davis is famous for her uncompromising stand on abortion, and Greg Abbott’s campaign will remind any voter who forgets.

Davis can count on national liberal groups to support her. EMILY’s List, the Daily Kos, and Planned Parenthood supported Davis even before she officially launched her campaign, and more groups are sure to follow. This support will help Davis raise money and organize volunteers, which will be particularly helpful since Davis has never run in a statewide election before and needs to quickly assemble a large-scale campaign.

This support comes with some major drawbacks, however. No matter what state an election is in, voters don’t like feeling that outside groups are picking their elected officials. National Democratic groups are doubly unpopular in Texas, because they aren’t just outsiders, but liberal outsiders.

Ultimately however, no amount of outside support, even if it were anonymous, could save Davis from herself. She is fundamentally out of step with the voters she needs to court, and her poll numbers show it. The real question isn’t why Davis is doing poorly, but how anyone could have thought she’d do well. The loving embrace of Davis by Democratic leaders and national donors shows that Democratic activists can make political decisions as silly as any Tea Partier.

Davis will soon join Garry Mauro, Tony Sanchez, Chris Bell, and Bill White as a forgotten would-be governor of Texas. If she’s lucky, MSNBC will call with a job offer. If she’s smart, Davis will sign the contract before the election’s even over.