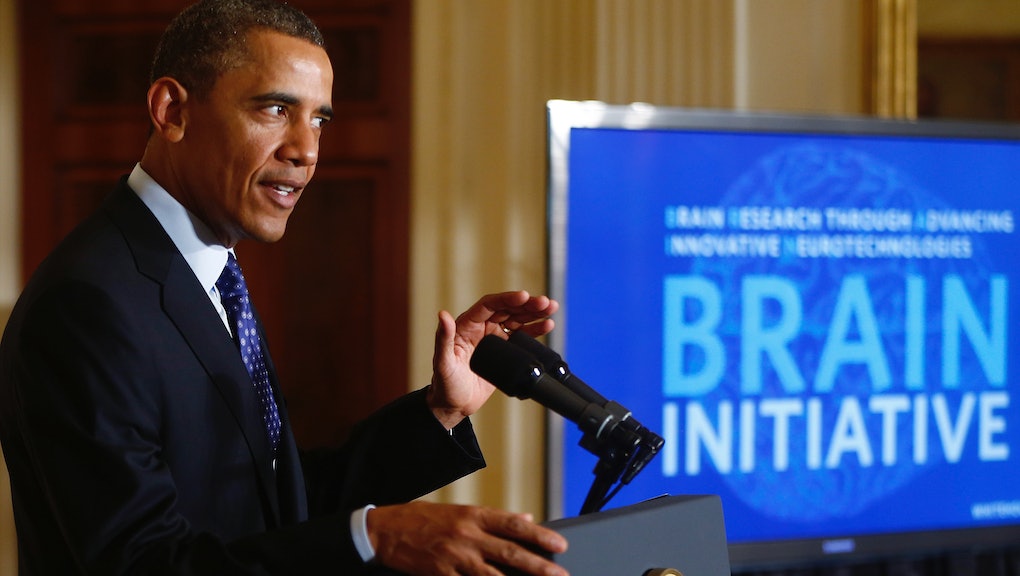 The BRAIN Initiative: Over-hyped or Undervalued?

When President Obama announced the Brain Research through Advancing Innovative Neurotechnologies (BRAIN) Initiative last April, it sent a buzz through the neuroscience community. Described as the "moonshot" for brain research, the $100 million, 10-year research project aimed to create the toolkit needed to study and understand the brain. But recently, it's come under fire for being underfunded and overpromised. While it's encouraging that this administration understands the importance of investing in neuroscience research, the BRAIN Initiative won't live up to its expectations. At best, researchers will have better tools to begin studying more complex issues such as consciousness. At worst, the already tight funding for such an ambitious project will be cut, or the specific projects awarded will be too fragmented, leaving us with disjointed results instead of a cohesive initiative. At the Society for Neuroscience's annual meeting in San Diego this week, government officials were on hand to address current concerns.

Officials remained energized and optimistic about the goal of "revolutionizing our understanding of the human brain." Yet, with the bar set so high and research dollars remaining low, funding is a primary concern. Tom Insel, director of the National Institutes of Mental Health, announced that no new money will go towards the BRAIN Initiative, and funds will be redistributed instead from ongoing projects and discretionary budgets. This decentralized approach worries current researchers who fear this will take money away from projects that don’t fall under the BRAIN Initiative’s priorities, and lead neuroscientists to pursure other sources of funding.

Insel noted that the National Institutes of Health (NIH) spends about $5.5 billion each year on neuroscience research. For the 2014 fiscal year, $40 million has already been set aside for the NIH to jump start the project. Geoffrey Ling, deputy director of the Defense Advanced Research Projects Agency (DARPA) added that this project is not a windfall to throw money at a problem, but an attempt to create a new model for research and collaboration across agencies.

Public interest in the brain is at an all-time high, and the progress over the past few years has been extraordinary. Yet with interest and progress come expectations, and many fear that the BRAIN Initiative will not be able to deliver. Ling addressed this concern and explained the research would be deliverables driven. "Researchers will be competing agianst the clock instead of each other to either meet their milestones or change course," he assured the audience. In October, DAPRA announced they would spend $70 million dollar to focus on Deep Brain Stimulation research, with the ambitious goal of having a device ready for FDA approval in only 5 years. Moreover, Ling added that US researchers would collaborate and share data with the many similar projects already underway around the globe to further progress.

Researchers are only beginning to scratch the surface of understanding the brain. Unfortunately, the tools needed to dig deeper do not yet exist. The BRAIN Initiative, which may be able to help create that toolkit, has admirable goals with optimistic supporters. While it is a promising start, its leadership should be careful not to overpromise, especially in such a turbulent political climate. Hopefully at next year’s conference, there will be more answers than questions.