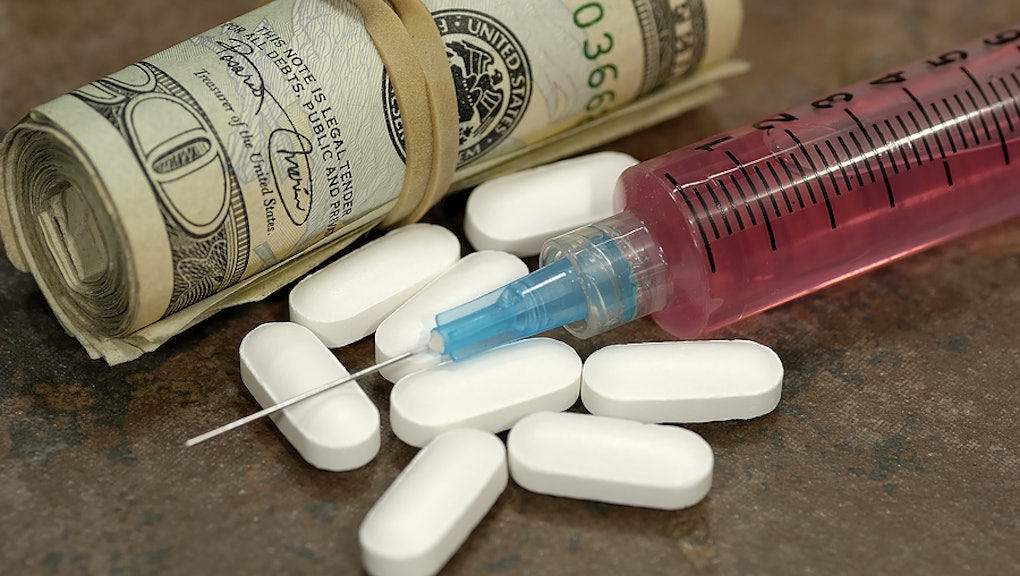 We have heard it all before: The War on Drugs is lost and legalizing drugs would mean more government revenue. Doesn't that make it a good thing? But the legalization crowd's arguments are based largely on unsubstantiated claims and misleading statistics. Just scratching beneath the surface suggests that a world with either no restrictions or fewer restrictions on narcotics would be a long way from utopia.

1. The Government Spends as Much on Therapy for Legal Drugs as It Does On Containing Illegal Drugs

Believe it or not, the real problem in recent years has not been illegal drugs, it has been legal ones. Harvard economist Jeffrey A. Miron, in a pro-legalization study, suggests that we could collect as much as $32.7 billion in tax revenue from the sales of recreational drugs. Well, guess what? We spend about $72 billion every year on treating prescription painkiller addiction. Legalizing drugs has not made people use them more responsibly. In fact, since 1999, deaths from legal drugs have increased by as much as 400% among women and 265% among men.

2. Recreational Drug Use Would Mean Less Educational Attainment and Lower Productivity for Users

This should be a no-brainer, if you will. It is an idea that pervades popular culture. But it is also borne out by the evidence. A study by the National Bureau of Economic Research (NBER) concluded that marijuana had roughly the same impact on one's educational attainment as growing up in a single parent home. While it is still an open question as to whether or not marijuana use lowers IQ, this research from the NBER indicate that it goes a long way toward creating the conditions that lead to ennui and underachievement.

This is just addressing marijuana, which is probably the most harmless illegal narcotic. It is also the narcotic for which the most research is available, but if someone wants to make the case that cocaine actually has a net positive effect or that meth is good for math, I am happy to hear that person out.

If drugs ever are legalized wholesale, you can expect to see much more invasive employers and many more ambulance chasing lawyers. There already are urinalysis test requirements for many jobs, such as trucking, law enforcement and heavy duty manufacturing. But if drugs ever become prolific in society, there will still be many employers who refuse to hire anyone who uses them. That will not prevent paying customers from scrutinizing every mistake employees make. Soon, we might be hearing plaintiffs shaking their fists and screaming things like, "You have a pot smoker managing my retirement fund?!" "You let a cocaine user teach our kids organic chemistry?!" "You handed our advertising campaign to a meth junkie?!" At the moment, most employers and industries are covered by the fact that it is the government's responsibility to regulate drug use. If drugs are legalized, that responsibility will fall on the industries themselves. And they and their clients will not let anything slide.

People who favor legalization almost always mention how much money the government could make from a consumption tax on weed or crack. But the government making money is not a good thing if it is taken from the wrong revenue source. For instance, it is usually not a good thing when the government takes money that would otherwise be invested in the economy. That is why capital gain taxes are so low. It is also not a good thing if the government takes money from people who badly need it. Yes, drug addiction afflicts the rich as much as the poor, but these statistics are not a good indication of the future. One of the reasons why drug use has been comparatively high among the wealthy is because the ban on drugs has made them more expensive while cheaper legal forms of recreation, such as smoking, are more commonly amongst the poor. The poor also have fewer resources with which to break addictions and are also more affected by paying, say, a $20 tax on a pound of marijuana than a rich person would be by purchasing the same product for the same amount.

The legalization movement has always been more of a pet issue of the 1% than it has of other Americans. While a slight majority of Californians, regardless of race or income, opposed marijuana legalization in 2010, the uber-rich, such as this guy, this guy and this guy have always been dead set in favor of it.

Does this mean that we should keep the incarceration system that is currently in place? Not necessarily. There are other approaches to the issue that somewhere in between where we currently are and the wholesale legalization that libertarians are always pushing for. This might mean giving more autonomy to local law enforcement; legalizing marijuana for medical use; considering compelling criminal justice options like corporal punishment for minor infractions; and hunting down drug kingpins with fewer federal officers and more bounty hunters. But this does not mean giving in to the idea that all is lost as the growing legalization echo chamber keeps claiming.

Just because an idea is fashionable does not make it right.