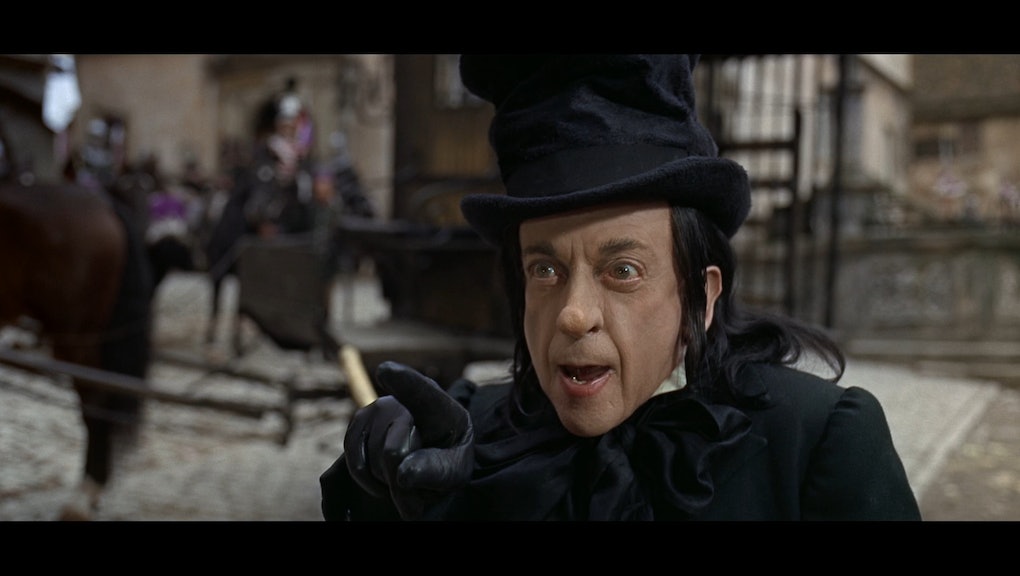 Sometimes I'm astonished at what kids are able to handle when it comes to movies. Let's face it: some so-called "children's movies" are creepy as heck. Remember when Pinocchio got swallowed by a whale or almost turned into a donkey? Or when the long-nosed Child Catcher captured the kids in Chitty Chitty Bang Bang? Or when the cute little dinosaurs were nearly devoured by the Sharptooth in Land Before Time?

I definitely do. And I also remember that I absolutely loved those movies. Kids and grown-ups alike love to be scared, so maybe that's why so many PG or otherwise "family-oriented" movies are frankly terrifying.

So whether you're looking to reminisce on particularly scarring moments in your childhood or to terrify a kid in your life, here are nine movies that will scare you no matter how old you are.

This film adaptation of Roald Dahl's children's classic is enough to scare you away from candy for awhile. This tops the list of films to watch whenever you need to see a child stretched to 10 feet tall, turned into a blueberry, or attacked by squirrels.

Flying monkeys. They will never cease to be terrifying. And besides that, The Wizard of Oz has all kinds of scary going on: a house crushing someone to death, a poppy field where people fall asleep to die, and of course, the Wicked Witch of the West herself, played by a brilliantly frightening Margaret Hamilton.

The "Poor Unfortunate Souls" scene never fails to give me chills. What's more terrifying than the thought of becoming a piece in Ursula's creepy "garden" forever?

Even though it's rated PG-13, Stardust still falls under the "family" category, according to IMDB, likely due to its fantasy elements. These fantasy elements include a witch whose sole mission is to catch a star, cut out her warm, beating heart, and eat it. You know, usual family fare.

The Neil Gaiman book was already disturbing before it became the first wholly 3D stop-motion movie and a supposed children's film. I contend that the Other Mother could be the creepiest fictional character of all time. If you disagree, well, how would you like to have buttons for eyes?

6. 'The Nightmare Before Christmas'

I actually saw this for the first time this Halloween and can vouch for its creepiness no matter how old you are when you watch it. I'm not sure what was scariest, but the twisted children's toys that were left by Jack Skellington-turned-Santa or Sally's fashion of pulling off body parts as needed are both options.

You missed out on some serious childhood memories if you didn't watch this one as a kid. The Pleasure Island scene, where Pinocchio tries to escape before he turns into a donkey, is probably the most obviously scary part of the movie, but don't forget when he gets swallowed by a whale.

The Child Catcher terrifies me every time I watch this movie.

One of my favorite movies as a kid, Land Before Time had some surprisingly mature scenes. There were definitely frightening elements in the chase scenes where Littlefoot, a "long-neck," has to elude the terrifying Sharptooth, a T-Rex. But the movie has some sad scenes, too, most notably when (spoiler alert circa 1988) Littlefoot's mother dies after battling Sharptooth. Littlefoot has to deal with life, love, and loss — and what’s more terrifying than that?