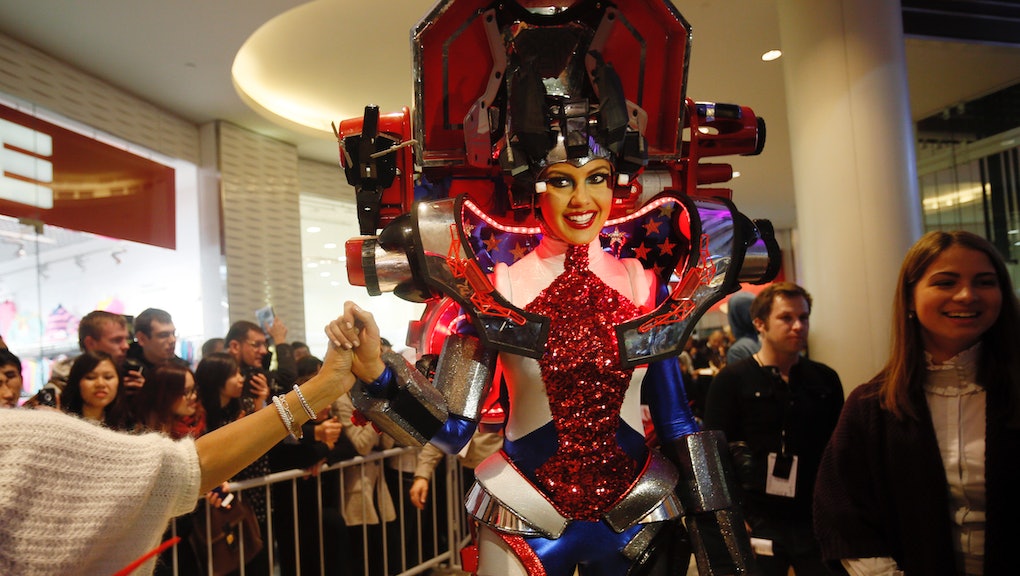 In this week’s issue of bizarre news that you’re glad isn’t just an Onion headline, Erin Brady, Miss USA 2013 (which is, I found out, different than Miss America, although I have not yet discovered why) wore a Transformer costume for the Miss Universe 2013 national costume contest.

Because, in her literal Instagrammed words: "Nothing screams national costume like the first Miss USA Transformer."

I’m not an admirer of Michael Bay’s continuing series; I find Transformers movies boring, loud and often geographically inaccurate. (The second movie indicates that Giza in Egypt and Petra in Jordan are near each other, which seems odd since the two countries are separated by Israel.) Nor am I terribly taken with beauty pageants, as I find they tend to bring out the worst in people — whether that's the unsavory responses of the contestants or the horrifying racism of American television consumers.

But I did appreciate Brady’s choice. I find pageants comically archaic in their intense focus on appearance. I’m not sure how long their narrow definition of what a woman "should be" can last with a younger generation wanting to crack that definition wide open. Some people involved in pageantry may be beginning to understand this — in 2012, transgender women were allowed to participate, and trans issues came up (albeit in a fairly un-nuanced way) in the questions section of the Miss USA pageant that year.

And while Brady’s patriotic Optimus Prime costume may not be a symbol for human rights, she also didn’t go as a sexy colonialist wearing a giant American flag. She wanted her costume to emphasize power and strength, two characteristics that these contests don’t tend to highlight. For everything that I dislike about beauty pageants, that was a bright spot.

And okay, fine, haters: transformer robots are technically from Japan. But Michael Bay — and all his misinformation about Middle-Eastern geography — is so, so so very American. That’s all that really counts.