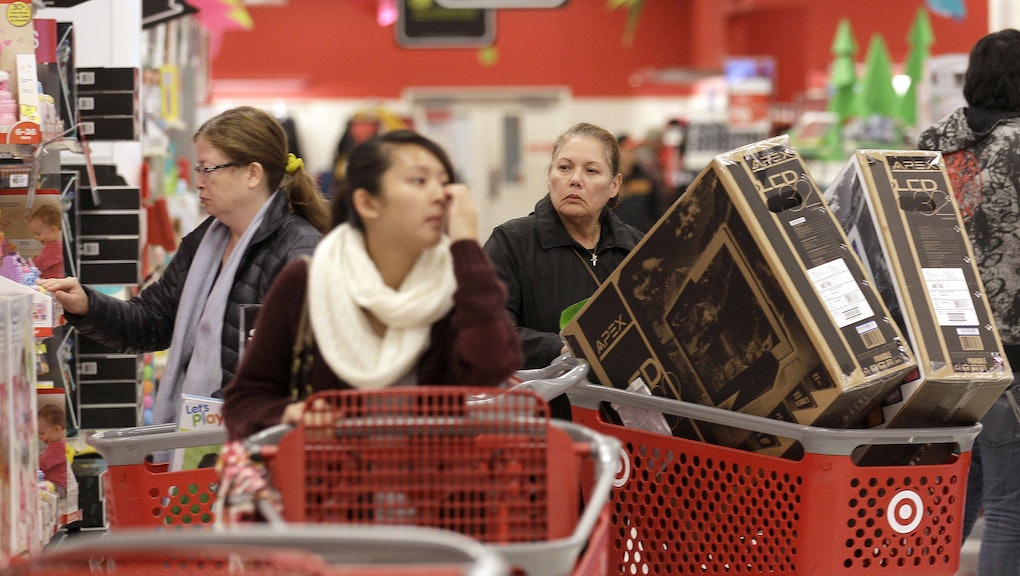 Black Friday 2013: Walmart, Best Buy, and Others to Ruin Thanksgiving

In recent years, Americans have seen earlier starts to the holiday season than ever before in the form of advertisements, deals, and store openings on the day that is infamously known as the start of the shopping season: Black Friday. However, this new tradition of shopping on the day after Thanksgiving is beginning to destroy one of the oldest traditions of the American culture, Thanksgiving itself.

It's a vicious cycle of holiday intrusion: Shoppers are sacrificing one holiday in order to have the chance to make another holiday cheaper. But the ones who are truly affected during this time are the workers who have no choice but to leave their holidays early — or forego them entirely — in order to show up to their jobs. Here are the top five offenders of ruining the holidays of their employees.

Macy's will now open its doors early at 8 p.m. Thanksgiving Day, breaking from its tradition of 155 years to wait until Black Friday to open its stores. However, Macy's supported its decision by stating that deals would become available to customers "after families across the country have finished their holiday meals and celebrations." Macy's is attempting to display how it still has the American family's interest, and not the interest of its company, at heart.

Toys-R-Us will also break tradition of respecting the Thanksgiving holiday by opening its doors at 5 p.m., presumably before most people have finished eating their turkey dinner. Understanding most parents are unable to shop for gifts with their children present, Toys-R-Us will be making most of its doorbuster deals available online after midnight in attempts to satisfy its market on Black Friday.

Best Buy will now open earlier this year than in the past, offering deals to customers at 6 p.m. on Thanksgiving Day. A full 23-page ad promoting all of the doorbuster deals will be available beforehand for those eager enough to leave Thanksgiving dinner early to shop for that special someone, or perhaps even just themselves.

Just like Best Buy, Walmart will be opening its doors at 6 p.m. on Thanksgiving Day, under pressure to move times up for consumers with other retailers. However, have no fears: Duncan Mac Naughton, the company's U.S. chief merchandising and marketing officer, assured reporters that the 1 million employees needed to work at that time are "really excited to work that day," despite the online petition signed by 30,000 employees asking for Walmart to avoid opening the store on Thanksgiving Day.

Kmart has taken holiday shopping to a completely new level, opening its doors at 6 a.m. on Thanksgiving Day. The staggering difference that Kmart is making between years past and the upcoming holiday is that the retail chain will remain open for 41 hours straight, rather than close for a few hours both at night and in the morning, which was done in the past. Many employees are furious and reconsidering their employment with the chain.