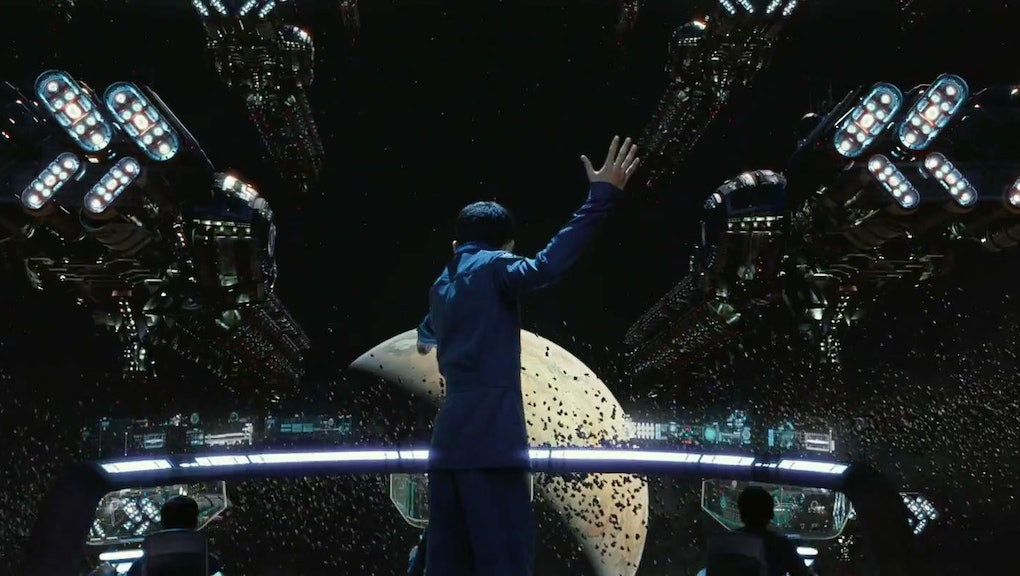 The rules on the use of force in armed conflict should be applied to video games that portray realistic battlefield scenes, in the same way that the laws of physics are applied.

Ender's Game may be a story about an apocalyptic invasion of buglike creatures from deep space, but it's also a story about video games. As such, it's a bizarrely fitting allegory for how we, in the real world where bugs are yet to be fully weaponized, fight modern wars.

The majority of the book's action follows 10-year-old commander-in-training, Ender Wiggin, as he plays video games. Anyone with an older brother knows it isn't much fun to watch someone else play games, but there's more to Ender's game than simulation (spoiler alert). He fights a war thinking he's training for one. In the proces of training, he commits genocide and sacrifices many of his own soldiers. "I was ordering pilots to go in and die and I didn't even know it," he says in the book after watching an alien planet explode. His simulations had bled into reality.

Turns out ours have, too. In the real world, massive human rights organizations are concerned about Ender's conflict. Recently, the Red Cross issued an official statement encouraging game developers to code real world consequences for war crimes in their games. This is a kind of extreme version of legal theorist Lawrence Lessig's idea that "code is law": nobody would ever prosecute against virtual war crimes, but they can still be prohibited, or at least discouraged, by way of virtual consequences. As far as the International Committee of the Red Cross is concerned, "the rules on the use of force in armed conflict should be applied to video games that portray realistic battlefield scenes, in the same way that the laws of physics are applied."

If war looks increasingly like a video game, then our war games are part of how we fight.

It sounds like a ridiculous claim at first. Anything that might set the precedent down the line for dragging a 13-year-old Xbox live fanatic out of school for an appearance at the Hague sort of seems like a stretch. Yet, like Ender's world, our real wars are becoming entangled with virtual ones. The Red Cross initiative is especially applicable to games like the Arma series, which is used as a training tool for several global standing armies. In Arma, you can fly a drone on a realistic interface. Perceptually, the experience of flying the Arma drone is almost identical to the experience of flying an actual drone. The difference is you can't kill anyone on Arma. That distinction is hard to feel in battle when everything else about how soldiers fight remains the same.

All this concern is putting even more pressure on gamers, a beleaguered group when it comes to public concern over their past-time. Conservative news outlets have always been especially eager to tie video game obsessions to psychopathic tendencies and acts of extreme violence. These concerns are almost always extreme — generally, if someone has a video game obsession, it's because they're an obsessive person, which should already be a red flag. The common defense to these more outlandish claims is that video games are art — just as comic books were art — and such concern over their psychological and moral influence is overdrawn.

Yet as the machinery of war appropriates designs recognizable from video games, and as video games become realistic enough in their representation of contemporary conflicts, it seems that neither side is completely right.

Video games aren't the real world, yet they aren't solely abstracted from it. Real combat is nothing like a video game, but many soldiers now go into war with experience from civilian and training video games as their first referent for combat. If war looks increasingly like a video game, then our war games are part of how we fight. In 2011, the U.S. Air Force trained more drone pilots than traditional pilots, and much of that training occurred on a simulator. Yet real drone combat is perceptually almost identical to simulated combat. Drones should never be operated without a visceral awareness of every action's moral valence. No soldier should be encouraged by a tool's design or a training game's similarity to the latest Call of Duty to think less of real warfare.

Drone operators often make the comparison between executing a drone strike and using a simulator. "It's a lot like playing a video game," said one drone operator in the London Imperial War Museum's drone documentary, 5,000 Feet is The Best.

In the coming weeks, readers will hear more across media from Brandon Bryant, a 27-year-old ex-drone operator. For years, he sat in a windowless bunker in the American west, flying drone strikes in the Middle East. In 2011, when was offered a $109,000 bonus to continue flying, he was also given a summary of his team's stellar record. He called it a "scorecard." He'd flown 6,000 hours and participated in operations killing 1,626 people — one of whom he fears was a child. He declined the raise. Now, he wants to show pilots that they're operating "more than just a video game."

Video games in reasonable doses won't seriously alter a person's mind or morals, but they are our first schemas for war; the first referents for future military personnel's perceptions of battle. They have a responsibility beyond entertainment, then, in their representation. Realistic military video games aren't just games anymore. Like Ender's own, our games have a place in the making and unmaking of worlds.