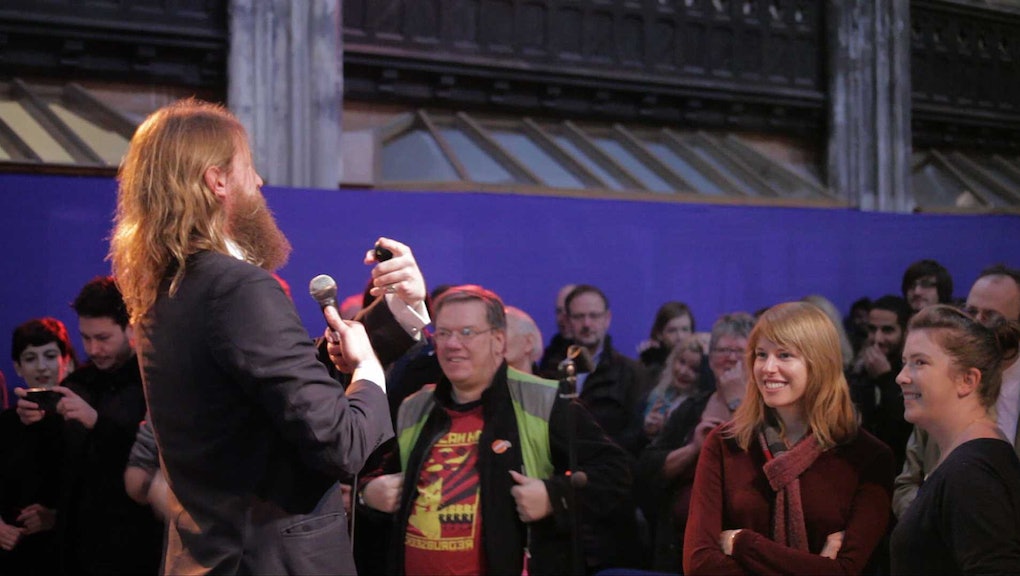 Atheist Mega-Churches Are the Bizarre New Trend For Unbelievers

The shocking growth in the popularity of America's so-called mega-churches has taken on another bizarre twist. These giant complexes house hundreds or even thousands of worshipers gathering every week for prayer, song, and community, and have grown startlingly quickly. It's been a successful franchise for the faithful and now, it's a business model that's expanding its market share. Mega-churches are not just for the faithful anymore. They're for the unbelievers.

The first atheist mega-church rose up in London, and now founders Sanderson Jones and Pippa Evans have launched an evangelical world tour. Part philanthropy and part comedy, they celebrate a godless mass every Sunday in a new location, currently traveling the United States. In an interview with Russia Today, Jones noted, "If you think about church, there's very little that's bad. It's singing awesome songs, hearing interesting talks, thinking about improving yourself and helping other people. And doing that in a community with wonderful relationships. What part of this is not to like?"

It just so happens that Jones and Evans didn't believe what the talks were about, so they decided to have their own. Though independent, each assembly includes song, reflection, discussion, and a sermon. What else should you expect? According to their website, "Just by being with us you should be energized, vitalized, restored, repaired, refreshed and recharged. No matter what the subject of the Assembly, it will solace worries, provoke kindness and inject a touch of transcendence into the everyday." They're doing all that, and still keeping the doors open to the faithful.

Their congregation, Sunday Assembly, whose motto is "Live Better, Help Often, Wonder More," saw 3,000% growth in just the first few months. The founding duet believe it's the fastest growing church in the world and they might be right. According to Pew Research, a full fifth of the American public is a "none," or someone with no religious affiliation. Though that doesn't necessarily mean that 20% of America doesn't believe in any higher powers, it's still an enormous leap from 15% just five years ago, and it explains the packed houses at Jones and Evans' services. The United States is the latest to be swept up in the popular movement, which includes massive assemblies in Australia and parts of Britain.

They're not the first to start a movement like this. In the early 1800s Felix Adler initiated the rise of the secular community center as a means for uniting all peoples regardless of creed under a unifying secular ethic. Though Jewish, Adler was a humanist rabbi of sorts, believing that man can and should be good without God. His communities celebrated life and community service.

Perhaps in a strange way, this could be the most successful model the secular movement has found to advance its cause. With church attendance both dismally low and depressingly old, younger generations are looking for the same kind of community Adler set the precedent for. Among atheism's supposed disadvantages is the lack of the natural community which traditional faiths claim to provide. With the advent of the atheist mega-church, people will be hard-pressed to argue that atheists are still isolated.