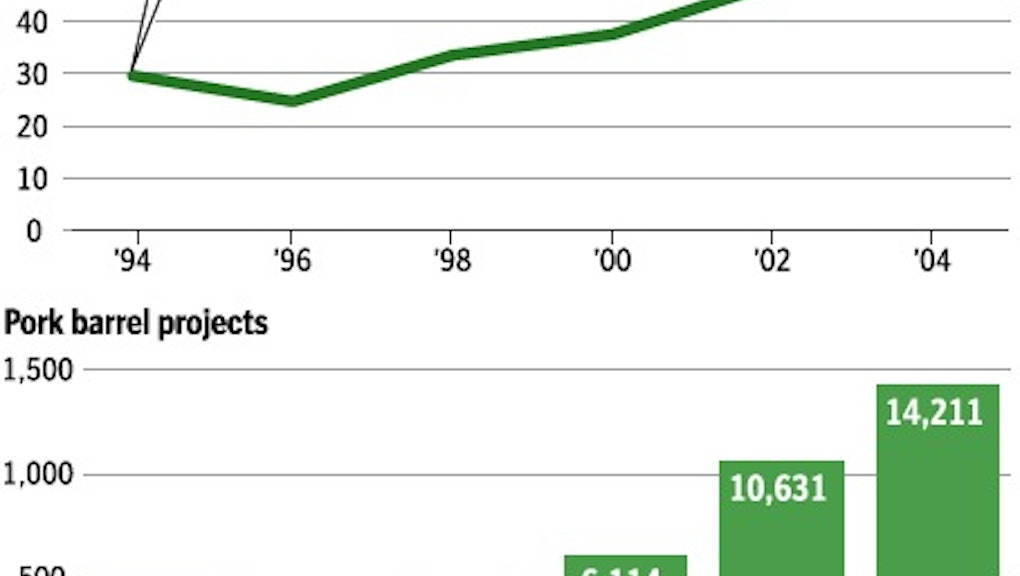 This Government Practice Wasted $15.9 Billion in a Single Year — We Have a Chance to Stop It

In a Nov. 4 post published on The Hill's website, former Rep. George Nethercutt (R-Wash.) claimed that failure to reinstate earmarks (provisions that channel funds to specific projects which the House voted to ban at the beginning of this year) would create “purist legislators who largely disdain compromise, resist seniority, and refuse congressional earmarks.”

But Rep. Nethercutt is leaving out some important points; earmarks promote overblown spending by the federal government, and encourage members of Congress to sell out the American people in order to remain in power. Instead of talking about ways to reinstate earmarks we should be talking about how to get of them forever.

Rep. Nethercutt is correct that while earmarks account for a small amount of federal spending, the reasons for the congressional earmark moratorium have little to do with their expense. Earmarking led to corruption, including the incarceration of members and staff.  The process also led to an inequitable distribution of projects, with the vast majority being handed out to members of the Appropriations Committee on which Rep. Nethercutt once served. Votes being traded in exchange for parochial interests as earmarks are only a symptom of the larger problem of uncontrolled government spending in Washington. Sen. Mark Udall (R-Colo.), also an avid supporter of earmark elimination, once stated, “Lawmakers are so afraid of losing earmarked funding that they’re sometimes pressured into supporting a vicious cycle of increased spending.”

For example, Congress approved 9,499 earmarked projects in the fiscal year 2010, totaling $15.9 billion, prompting the Republican majority to spearhead an earmark moratorium in 2010. Taxpayers were hopeful that the practice of earmarks would come to an end with the passage of the moratorium, though an analysis of the 2012 National Defense Authorization Act (NDAA) completed by the federal watchdog group Citizens Against Government Waste identified 111 earmarks — 59 of which matched exact language from previous earmarks. A 2012 report completed by Sen. Claire McCaskill (D-Mo.) and her staff also identified 115 earmarks worth $834 million in the NDAA alone. Two years later, Sen. McCaskill and Sen. Pat Toomey (R-Pa.) introduced S. 1930, The Earmark Elimination Act, which would build upon and make permanent the earmark moratorium of 2010.

According to Rep. Nethercutt, moving American forward means restoring “responsible” earmark policy in order to honor American taxpayers and other important government institutions by accepting the “80% victory” system made prominent under President Ronald Reagan. But this “win-some-lose-some” mentality never really worked in favor of taxpayers. Rep. Nethercutt fails to mention how earmarks allow lawmakers continued to sully the political process by directing chunks of the federal budget back to their home districts and states to promote their own political agendas. This corrupting influence even tempts members who might otherwise want to defend taxpayers, as peer pressure lures them into becoming part of the problem.

President Reagan envisioned limited government and a sense of individual responsibility that would motivate Congress to govern accordingly, not an atmosphere of fiscal negligence and aberrant behavior at the expense of American taxpayers. Rather than politicians asking how they can hold onto political power, they should instead be identifying ways they can reform government and return both money and power back to the American people. That does not include vote-trading between members that significantly increases wasteful spending. A permanent ban on earmarks would be a powerful step toward establishing a culture of fiscal restraint and trust in Washington. That would be a 100% victory for both Congress and the American people.