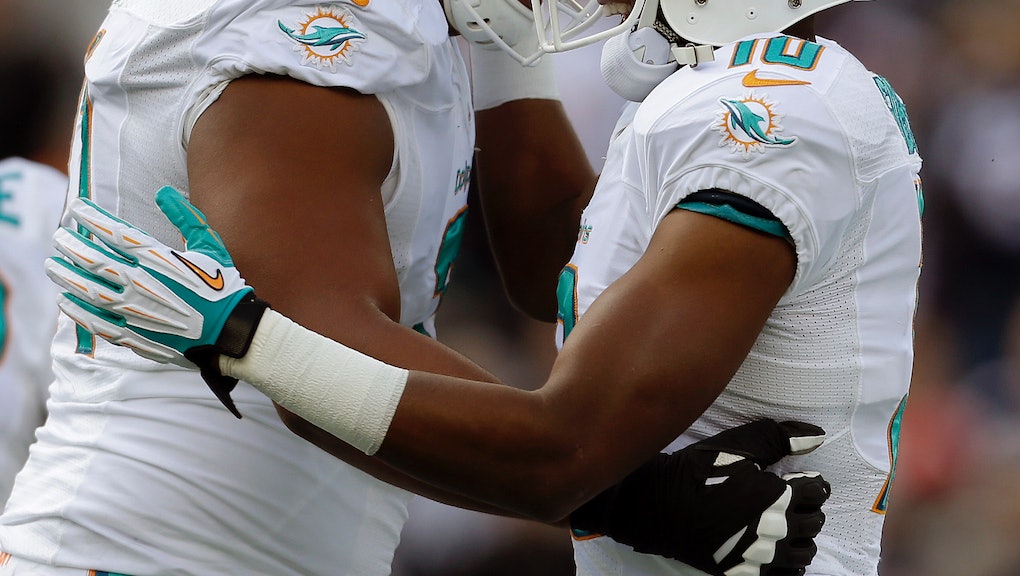 What Real Men Are Saying About the NFL's Sick Bullying Scandal

As the Incognito-Martin scandal progresses, there have been some encouraging responses from current and former players, calling out not just the individuals involved and the Dolphins organization, but American masculine culture and the way it’s manifested in the NFL.

Marshall's comments, in particular, touched on a concept that co-founder of Call to Men, Tony Porter, addressed in a now-famous TED Talk: the "man box."

According to Porter, many boys of his generation were raised by both their fathers and their peers to stay within the walls of this box:.

Porter cautions that the boys that become men without ever leaving the box are more prone to being emotionally stunted, to violence in general, and particularly to violence against women. (It is sadly fitting that Marshall himself was arrested in 2007 for domestic violence charges against his then-girlfriend.)

This emphasis on anger, dominance, and lack of fear are most extreme in the NFL and NFL players are widely considered the most masculine men in the country, placed on a pedestal to the point of near-worship.

Have these "man box" expectations been passed to millennial men, as well? Porter, who is older, has an extreme example of being forced to stay in the box against his will (i.e. placed in a room with a teenage girl he was expected to rape), but I think the pressure for boys and men is typically so effective precisely because it’s so subtle and consistent throughout life.

You may not have a football coach that outright calls you a wuss for showing you’re in pain, but you may get benched for doing so, or judged by your teammates.

I distinctly remember playing in a high school football game when my friend Max blocked another player on a kickoff return and broke his wrist. He jogged to sideline instead of taking the field, saying "I’m hurt" to the coach. The coach yelled at him, "What are you doing? Get back out there!" He continued yelling until Max held up his wrist, whose bone was creating a visible bump at the top of his forearm skin. He was rushed to the hospital. The implicit lesson for me at the time was that unless you had a bone practically protruding through the skin, you played through the pain.

This expectation applies to internal pain as well. Carlos, 27, likens the often unspoken expectation for men as "a weight, a pain in my chest that I was never able to get rid of because it was not considered manly for me to talk about my feelings or for me to cry." That sadness, which he faced most intensely as a teenager, soon turned to anger, which led to unhealthy outlets such as alcohol.

This cycle of internal emotional struggle turned actions (i.e. restrained sadness –> anger –> unhealthy actions) can be passed down through generations, as fathers teach their sons, implicitly or explicitly, to be the same.

Scott, 26, grew up with an emotionally distant father and alcoholic grandfather, who only felt comfortable in social situations if they were "dominating," and who both struggled with depression for most of their lives. Scott’s emotional issues are not nearly as severe, but he says he still has problems communicating in romantic relationships because he’s worried he’ll "sound too sensitive (read: like a woman)" and that his girlfriend would think him "weak."

Additionally, the man box clearly leaves no room for gay men. David, 26, says he has never felt suffocated by masculine expectations, but definitely pressured to adhere to its strict gender roles, which puts him in a tough position. Who is the "dominant one" and the "decision-maker" in a relationship with two men? David joked with me, "OK, so you're a man, and I'm a man, no I'm not opening the door for you, you can open it yourself." Doors are perhaps the least of one’s man box troubles, but you get the idea.

Returning to the NFL, home of our country’s most concentrated collection of hyper-masculine men, much of the official reaction to the Incognito scandal is that Miami’s locker room is an abhorrent aberration.

"What’s going on in Miami goes on in every locker room…it’s time for us to start talking…maybe talk about what’s going on off the field…and not mask everything. Because the longer it goes untreated, the worse it gets."

Whether or not you were raised in a man box (which it seems many of us were), the most important thing is to express yourself your way. If you’re naturally more stoic, that’s fine, but be sure to know the difference between internalizing an emotional issue because that’s better for you and suppressing your feelings because you’re ashamed. In the case of Martin, he took a stand his way, and we should admire him for that.

Omar, 32, perhaps says it best: "It takes a certain level of maturity, understanding, and confidence to step outside the man box and consciously elect to show emotion, fear, and/or weakness."