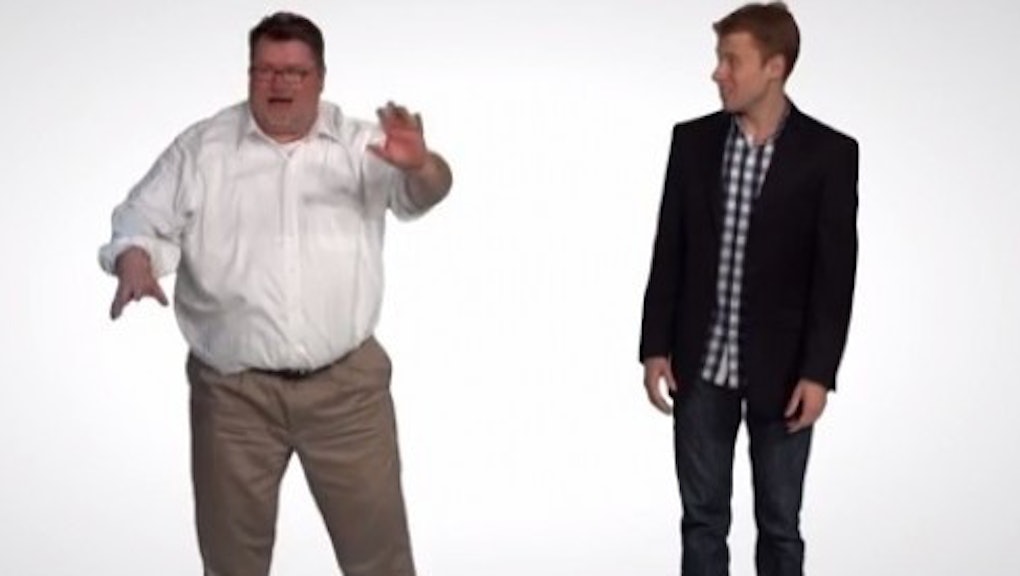 The Republican National Committee (RNC) is trying hard in its poor attempts to target and sway young adults against the Affordable Care Act (ACA). Since the first four ads weren't unoriginal or abrasive enough, the RNC released four more on Tuesday aimed at "highlighting the unmitigated disaster that ObamaCare's rollout has become."

GOP.com is referring to these awful, piano-backed ads as "drawing inspiration from a famous computer ad campaign." However, claiming that the ads make a sad attempt at attracting young Americans by ripping off four-year-old, played-out, tiring Apple ads would be more apt.

The common theme portrays "The Private Sector," a young, well-dressed guy who oddly resembles Mitchell from Modern Family exposing the costs and lies of "ObamaCare," a fat, unkempt, undesirable man.

A large challenge to ObamaCare — and a major caveat of its success — lies in the demographic of young adults and whether or not they buy health coverage. So it was a good, strategic decision for the RNC to buy its first spot in late October during an episode of The Daily Show. In addition to the attack ads on Comedy Central, the RNC

RNC Chairman Reince Priebus explained in a statement, "These videos help to convey the absurdity of ObamaCare and the administration's careless behavior."

More than anything, however, the ads convey how out of touch the GOP is with their intended audience. It is one thing to rip off a technology ad campaign for use in the political spectrum. It is entirely different (and just sad) to mimic one that ran from 2006 to 2009 in order to keep up with the events in 2013.

Yes, young adults are snarky, cynical and sort of snide, but we embrace the humor in originality and creativity much more than in exasperated similarity.

In the first year alone, 19 different ads ran as part of the "Get a Mac" campaign. By the end of the series, 66 ads had depicted the same cool, calm, t-shirt-and-hoodie-clad Justin Long against the clumsy, suit-wearing John Hodgman. You want to watch all of them again? I didn't think so. Here's one anyway to stir the nostalgia (anger, contempt, depression) from a few years back.

This isn't to let the pro-ObamaCare ads off the hook, either.

To put it simply, what the hell were the folks over at doyougotinsurance.com thinking? The collaborative effort between the Colorado Consumer Health Initiative and ProgressNow Colorado Education decided it was a good idea to imitate "Got Milk" ads in a wildly overdone, exaggerated series aimed at that pesky 18-35 age bracket.

"My health insurance covers the pill, which means all I have to worry about is getting him between the covers." There's so much going on in some of these ads, it's hard to keep up. Why is the girl below holding her birth control pills like the new iPhone, and why is this guy flying past that one-button-undone territory?

And since plain old insurance and birth control may not be sexy or funny enough, how about "Brosurance?" because these dudes know that "not having health insurance is crazier" than keg stands, and because the most relatable message for young adults comes from the guy in the purple v-neck and ripped jean shorts urging, "Don't tap into you beer money to cover those medical bills."

I never thought I'd miss Justin Long so much.