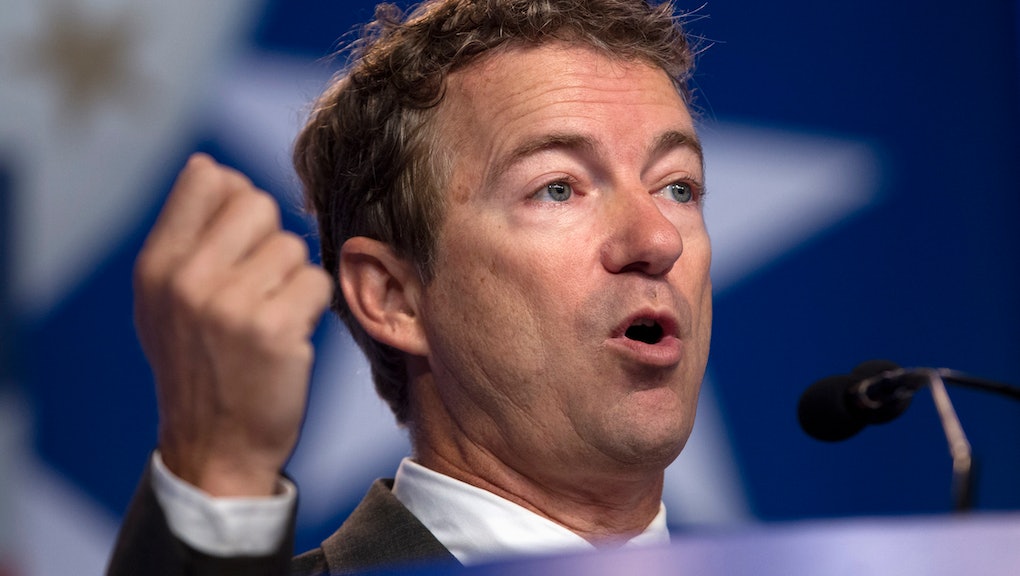 Don't Feed the Trolls, and Other Advice For Dealing With Libertarians

With its five syllables, iambic stress, and three open vowels, there's something so satisfying about saying "libertarian." It's a beautiful word, elegant and old-school, with phonetic roots like quill-penned pamphleteers. Its terpsichorean click of complicated consonants rolls off the tongue with gratifying ease, and a stoic sense of moral certitude is almost palpable in the sound. It carries the ring of anachronistic heroism, better suited to the hills of Port-au-Prince or revolutionary Spain than here or now.

No wonder it appeals so steadily to precocious teenage malcontents.

According to FreedomWorks, libertarianism is undergoing a renaissance in this country, and one hardly has to look further than PolicyMic's comment section (or the U.S. Senate) to confirm as much. It forces a question we on the left have been asking ourselves for a long time now: Must we take these people seriously?

There's a temptation to say no. I was a teenage libertarian myself, and it's tempting to believe that all libertarians fit the profile I did: rebels without causes, standing up in civics class and shouting, “Both parties are the same!” in a bid for cheap applause. There's a temptation to believe that like me, they've simply fallen into the unavoidable trap of arrogant adolescence, and that soon enough they will put down the F.A. Hayek, meet some people with diverse and difficult backgrounds, and allow their brain to progress to a point where it's capable of feeling things like empathy. Its tempting to believe that "libertarianism" is just a phase for bored, suburban white kids, a philosophy that's discarded with adulthood as readily as those boots from Hot Topic.

But giving into that temptation would be a mistake. Must we take these people seriously? The short, maddening answer is “yes.”

The new libertarians aren’t just trolling message boards in study hall: They're adults. They rally, they blog, they cast votes — most important, they invest hordes of time and money in their cause, from money bombs for fringe political candidates, to building a billion-dollar media empire out of outlets like The Blaze, InfoWars, The Daily Paul, and the Cato Journal. As much as it strains credulity to realize it, Reason Magazine is written by grown-ups. They have influence, and whether or not we take them seriously, they are absolutely serious.

That isn’t to say we have to take their ideas seriously, because frankly, their ideas are not serious. From a fear of fiat currency that demonstrates a basic inability to read a comparative CPI stability chart, to positions on wage productivity and social welfare that suggest they haven’t looked outside since the Battle of Blair Mountain, libertarian “arguments” are made in bad faith, predicated on long-discredited economic theories repeated ad nauseam and couched in an insufferably smug, prep-school sort of condescension (at least the more traditional right has the decency to be openly anti-intellectual). Any traction they’ve achieved has little to do with these "ideas" and much to do with their almost admirably schizophrenic capacity to adapt to the latest political fad: Libertarian rhetoric comes in flavors ranging from Tea Party to Occupy Wall Street, depending on who they’re trying to con that day.

Attempts to extend them credibility inevitably backfire: Having been on both sides of the divide, I can say it is vastly more tiresome to feed the trolls than to be one of them, and no sane person has the endurance to run all the way down that rabbit hole.

So what do we do? If we’re going to say that libertarians are a serious political force without serious ideas, it seems that we are at least obligated to make sense of them. While any libertarians reading this are busy readying their fingers for a good howl in the comments section (God forbid anybody take the same dismissive tone with them that they’ve been taking with “the sheeple” since AP Government class), I’d like to offer an explanation to my fellow leftists, beginning with a clearer picture of who these people are.

They're a homogeneous bunch. In Florida, for example, data from the Secretary of State suggests that libertarians are overwhelmingly young, white, male, and reasonably affluent — Young Republicans, essentially, except for their rejection of pastoral Christianity and jingoism.

There’s an irony in that. Here we have a group of young people high on Austrian economics, whose grandparents went to college on the GI Bill, whose parents attended accredited public universities and became professionals, and who consequently were able to grow up in leafy cul-de-sacs in Frank Capra neighborhoods with highways and power lines and fire departments. And now that they have reaped the benefits of the largest and fastest middle-class expansion in human history, largely thanks to the legacy of the welfare state, they have the luxury of loitering on the internet and crying fascism every time their state adjusts the tax rate. Because liberty.

But paradoxical as this is, it offers the explanation we're looking for: The New Libertarians are just the latest of example of good old privilege blindness, this time toward state largesse in general. Libertarians sit on top of a world built by public welfare, kept safe by government from the squalor and violence of earlier times. Among the many benefits they enjoy is the luxury of ignoring that fact, and believing their lot has come to them through merit alone.

But as long as we allow the privileged to ignore the origin of their advantages, libertarianism will continue to grow in scope and seriousness. That means more gridlock, more shutdowns and financial hostage taking, more one-sided compromises, and more cuts to vital services: all the ugly things that come with that lovely-sounding word.

So how do we dislodge them? I don’t know. It won’t be easy. Any social-justice warrior will tell you that the privileged classes do not surrender what they have without a fight, and fighting is easier when you’ve already got the spoils.

If we simply let them win, these fanatics might learn the hard way how reliant they are on the state — possibly after they contract e coli from un-inspected beef. That would be a lovely irony to watch, if it didn’t come at too high a price. But better that we figure out how to act now, before they permanently bite off the hand that feeds them caviar. That hand is ours, after all, and it holds up each of us, as well.