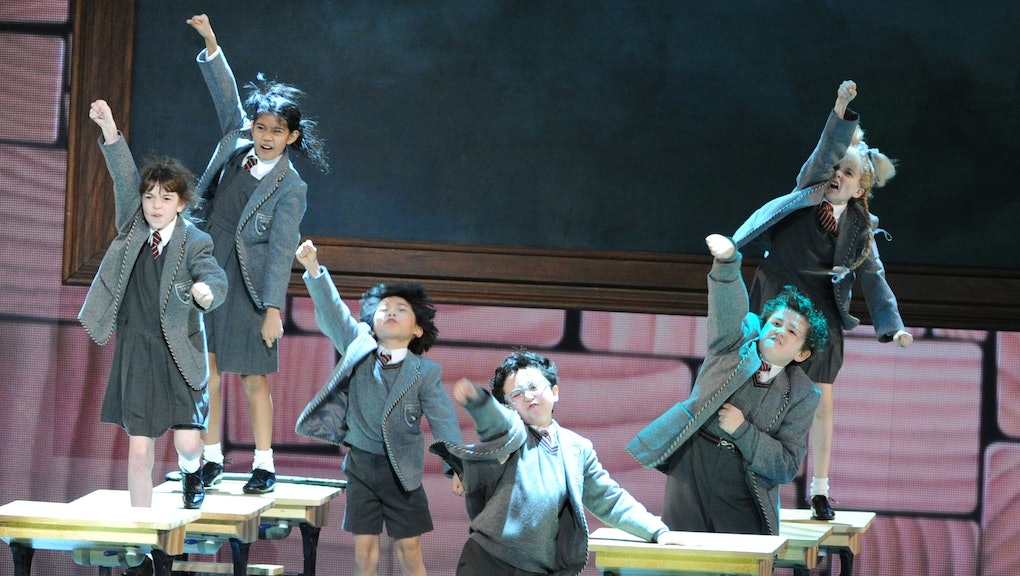 For Child Actors in Adult Shows, Make-Believe Can Be Too Real

At Fun Home, Two Boys, and Little Miss Sunshine — three big shows this season — children have been upgraded from bit roles to serious, meaty parts. Long gone are the days of little Cosette and orphan Annie being their only options. Children are earning the right to perform real people with real problems, but giving them a platform to enact mature themes is not without issues.

The question is one that sits heavy over Two Boys at the Met. I spent most of the second act — having accidentally learnt what was to come by flicking through the Playbill — cringing as I waited for a boy soprano and a 30-year-old male tenor to climb into bed. The vocal parts required this age gap, yet watching how a 21st century production team and director arranged this scenario was nothing but uncomfortable.

I left the theater thinking more about the issues of staging than the issues explored by the work itself, and partially the fact that casting an adult and a child to have sex had meant nothing that explicit could actually be shown. If the synopsis and the libretto had not both outright said it you would not have known, so why not do it off stage? Was it just to stir controversy? Marek Horn recently directed Richard III using puppets instead of the child prince to avoid just this: "I think that if a production's primary marketing hook is the difficult situation in which it is placing a child actor then something is wrong."

Craig Lucas, the writer of Two Boys, believes there was no other option. "It would have been great to find a truly 16-year-old Brian, but Paul [Appleby] is certainly a young looking 20 something, and that divide between a 12 year old and a 16 year old feels, at least to me, accurately or adequately-accurate-enough, in representation, given how often the opera stage casts hugely overweight, or vastly too old." The show, of course, did shed light on the sexuality of young boys, but Lucas' words did this almost alone due to the conspicuous age gap. It is hard to say if two young boy actors getting intimate would have been less uncomfortable, but it might have gotten the point across better.

"If [violence is] completely safe in the rehearsal room then, to a child's mind, what is to stop it being safe outside of the rehearsal room? Perhaps that is where the choreography and safety measures came in."

Explicit children's parts are not new: Shakespeare used child actors in some of his most explicit scenes. Freelance director Sophie Gilpin staged a promenade performance of Macbeth in 2011 using a child actor for Macduff's son. The Macduff child, unlike most Shakespearean children, is killed on stage. Gilpin constantly involved the actor's mother in the process, stood in for the child throughout the rehearsal process (so as not to involve her in the exploration of murder) and did not let her watch the bloodier second half of the play. Yet her carefulness also brought up some reservations. "If [violence is] completely safe in the rehearsal room then, to a child's mind, what is to stop it being safe outside of the rehearsal room? Perhaps that is where the choreography and safety measures came in."

Although violence is commonplace within childhood literature, sexuality no longer is. Folkloric tales of childhood sexuality have been sterilized (Little Red Riding Hood) or forgotten (Bluebeard). When children are introduced to sex it is now, for better or worse, a fact of reality, presented without the exoticism or phantasmagoria of fairytale crime that proves it unacceptable for the contemporary reader's world. It could be for this reason that watching children through the lens of 'adult' ideas of sexuality feels exploitative at times.

Little Miss Sunshine for example, though more comedic than the other child actor shows on Broadway, is perhaps the least consensual in that the children are subject to, but not speaking of, over-sexualization. The pageant that serves as the final goal for Olive is a dark wonderland in the musical's third act. A three-witches-esque chorus of girls who berate Olive's appearance multi-role as tacky performers trotting about in revealing costumes.

Olive's decision at the end to take her sexuality into her own hands with her final number is a rare display of sexual liberation in a show that openly deplores the beautification of children. By including four young girl actresses, aged between 9 and 11, as consistent fixtures we engage with them enough to care when they do not change.

Fun Home is, arguably, more successful as a display of young sexuality. In a show lauded by Slate for being "the first mainstream musical about a young lesbian," Sydney Lucas, a 10-year-old actress whose previous work is mainly children's toy commercials, sings about early lesbian feelings. In one of two songs Lucas sings, Alison sees an androgynous delivery-woman in a diner. In that moment she realises she is the only person in the room who sees her beauty. It is a moment that resonates with many LGBT people, like myself, who know that there were signs when they were far younger that they were homosexual.

Considering Matilda is currently being played by four actresses in rotation, child actors are often not capable of playing principal parts single-handedly. This combined with the visceral nature of theater for audiences has, for some, led writers to be scared of child parts.

Katie Lambert is an actress from England who recently directed a production of Dennis Kelly's Orphans: a very dark family drama where a child repeatedly walks into the blood-soaked conversations of the adults. "More and more nowadays writers deliberately exclude children from their scripts to stop casting difficulties," says Lambert, "when a child is involved the seriousness of the subject can't be dismissed and an awkward situation is amplified by ten-fold." The power of young people in theater is lauded by some of Europe's biggest playwrights: in France, Edward Bond works exclusively with youth groups and Simon Stephen's critically-acclaimed Morning was also developed with the Lyric Hammersmith's young company. There is a great power in giving the young something to say on stage.

What this sudden influx of trust for young actors should do is prove they are capable of talking about the world. What this should not do is result in a belief that an active knowledge of the world must equate to complete participation in it or a compromise in the innocence of youth. Young people are gay people, too, and young people watch people die, too. Maybe avatars for these new voices will help open-minded people realize that ignoring the young does not help them grow up.