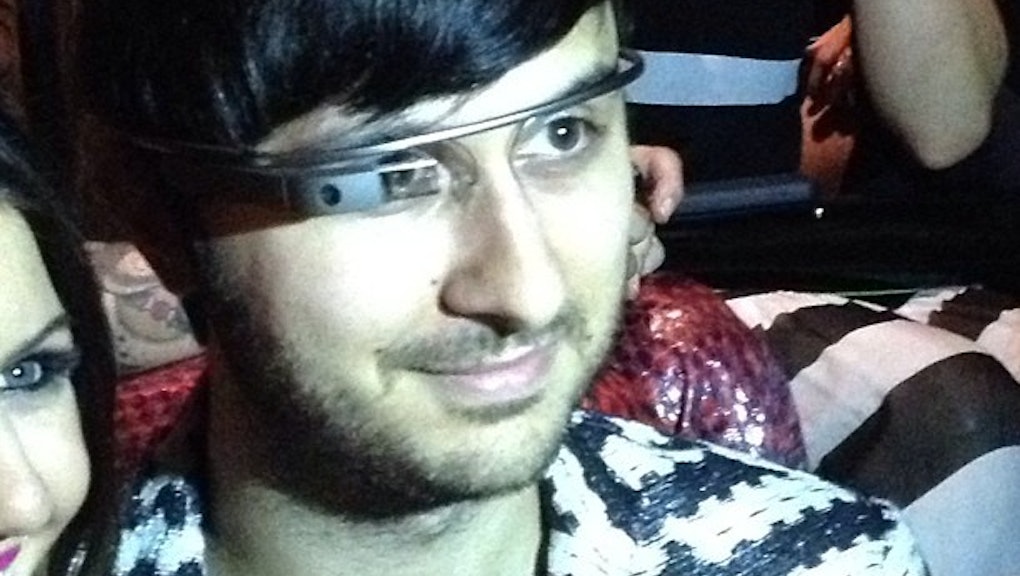 In San Francisco, it is possible to see these people occasionally, wearing these glasses-plus-Bluetooth-looking-things as they go about their business. I saw one last week at the grocery store. They aren't cool yet — in fact almost everyone I know whispers about how ridiculous they look as soon as the wearer is out of earshot. But this week, with the release of a whole bunch of new music features and a subtle move to open Explorer sign-ups to the general public, it’s clear that Google is getting prepared to fight their toughest battle yet: making Glass socially acceptable.

For lovers of science-fiction, Google Glass has terrifying undertones. Because it is worn like glasses and activated through blinks, voice commands, and eye movements, it is difficult to see when a wearer is filming and when they aren't. No holding up a camera or a cellphone. If Google Glass becomes widespread, you will never be sure when someone is recording you. It isn't paranoid to say that with ever-better facial recognition software, it will be possible for people to film you doing anything and then tag you, with or without your permission.

Also, at $1500, it is prohibitively expensive for most people. Who will be in the privileged class of wearers and recorders, and who will be under their constant surveillance?

Add the known fact that the NSA is collecting your information from Google to the new reality that you can and will be filmed by anyone who wants to film you, and here's the result: the footage will be put in a database for the government to search and use against you for any purpose they want.

So: we have reached a critical point in our response to and creation of new technology. Just because we can do something, should we do it? And if we decide not be part of these changes in technology, how do we stop participating?

A response being bandied about a lot by people in and out of power is: "If it makes us safer to take away this little thing, this freedom to act without being watched, then what's the big deal? I'm not doing anything wrong anyway."

This is a problem. It does not make us safer. As Benjamin Franklin so aptly put it, so long before Google Glass and the NSA were even a tiny dream: "Those who surrender freedom for security will not have, nor do they deserve, either one."

The slow loss of personal freedoms is how countries go from democracy to totalitarianism. The point of freedom is to protect us against regimes and leaders who would silence and dehumanize us if it helped them gain power, which means we have to protect it for everyone.

A lot of people I've talked to are a little but not too concerned about Google Glass. It seems obvious to almost anyone over 12 that anything they say online could be used against them in a court of law.

But what people seem to not understand is that it isn't just everything we say over the phone, in email, on Skype, in personal and private communications, that's being recorded, shared, and stored with the government — it's things we don't put in writing or ever plan to send, things people say to us, places we visit (all our devices have that handy GPS after all), videos we didn't authorize. All of it could potentially be saved and stored.

And it doesn't matter if you "aren't doing anything wrong." What is not wrong today might be wrong tomorrow. Ask the men indefinitely detained in Guantanamo Bay — many of whom are innocent, what they did wrong. In most cases they were just the wrong gender, the wrong religion, and living in the wrong place at the wrong time.

It is hard to imagine when we live in this country at this moment, when our freedom of speech is so unencumbered, that there will ever come a time when we aren't allowed to tweet whatever we want and write blog posts criticizing the government. But the loss of freedoms is slow, the desire of powerful people to remain powerful is overwhelming, and the inertia of the comfortable is the strongest force in the universe.

Edward Snowden, the whistle-blower living in exile who let us all know about the government’s massive spying program, said his biggest fear was that we "won’t be willing to take the risks necessary to stand up and fight to change things."

But as bleak as this is, it doesn't have to be this way. This whole system is surviving because we allow it to, which means we also have the power to say "enough already." We have to say no to Google Glass. I’m not going to sugar coat it: opting-out is hard. Even my staunchest, cellphone-hating friends have a flip phone by now. And the Facebook holdouts continue to miss out on every party.

But still: it’s up to us to not let Google Glass become normalized and cool. We do this by refusing to buy it. By refusing to talk to people who are wearing it, in a friendly way ("Sorry buddy, I can't talk you while you're wearing that contraption on your face" might work). By not sleeping with people who wear it. Remember that cough that judgmental people used to give when they walked passed a smoker on the street? We have to create an eye-roll that is the emotional equivalent to that cough.

Because this is our country, founded on the idea of personal freedom, which means anyone who wants to should be free to wear it and the rest of us should be free to shun them. Now is the time to draw the line.

Are you in, or are you already too far gone?