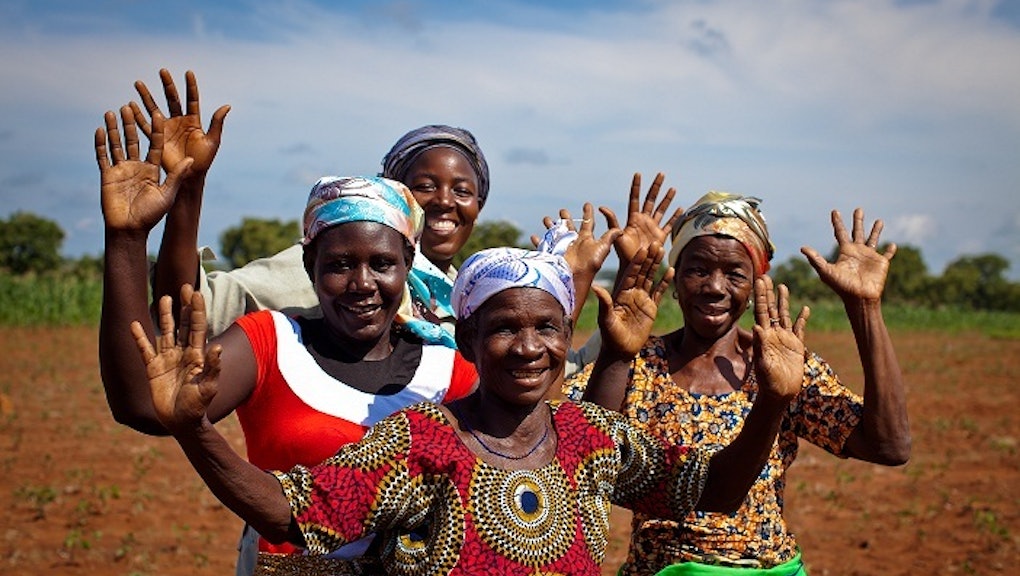 When most people think of Africa, they think of tribal warfare, famine, extreme poverty, AIDS, and chaos. Just 13 years ago, The Economist wrote Africa off as "the hopeless continent." But despite the statistical profile of the continent, Africans have remained the world's staunchest optimists with "a more positive economic outlook than many others around the world and are hopeful about their children's future," according to a recent Pew Research Center poll.

According to a Gallup World survey last year, African nations were some of the most optimistic. Although Gallup gave a pretty bleak explanation for the results, stating that, "Optimism may be more widespread in these countries simply because people cannot imagine that their lives could get any worse."

But here are a few brighter reasons why.

1. They're Experiencing An Economic Boom

Despite many in Africa being unable to afford some of life's most basic necessities, a median of 50% believe their children will be better off financially than their parents. In Nigeria and Ghana, for example, almost 65% of the respondents say their children will be better off — a much more optimistic outlook compared to some of the world's wealthiest nations. In the U.S. and UK, for example, a mere 33% and 17% respectively are optimistic about prospects for the next generation.

2. Their Wealth Of Natural and Mineral Resources

Last year, Citi predicted that sub-Saharan Africa will double its share of the world's economy as countries across the region begin to see growth accelerate due to commodities such as oil, increase in wealth per capita, and development of new industries. The continent also has largely untapped natural and mineral resources that could be another reason to be optimistic about its future.

Botswana used its diamond wealth to grow from one of Africa's poorest countries to become a stable, democratic country. According to Amb. Johnnie Carson, the former assistant secretary of state for Africa, Mozambique's natural gas reserves, for example, "Have the potential of making Mozambique one of the wealthiest countries in Sub-Saharan Africa."

The country also showed a 7.4% growth rate last year — a promising statistic for one of the poorest countries in the world.

3. Availability of More Goods and Services

Changing its stance on Africa's future, The Economist recently called it "the hopeful continent," saying African lives have and will continue to improve. Goods and services that used to be scarce are now readily available and changing the lives of Africans.

Mobile phone usage, for example, has spread more rapidly in Africa than on any other continent, at an average 18% annually in the last five years. Fewer than one in three Africans now has a mobile phone, and the device is used for health care, education, loans, purchasing and selling goods, agriculture, and an innovative mobile banking system in Kenya.

"A lot of people on both sides of the pond are waking up to the fact you can make big money in contemporary [African] art," said one of Nigeria's biggest media moguls. "Some of the things I bought just for aesthetic pleasure years ago are now worth millions."

Although Africa is still the costliest region for entrepreneurs, there is a growing wave of social entrepreneurs working to create innovative solutions to some of the many challenges that the continent faces regarding youth unemployment, education, health care, electricity shortages, etc. Representing the best of their generation, these young entrepreneurs are changing the face of Africa and inspiring the continent's largest population — its "youth bulge" — to follow suit as well.

6. An Unrelenting Sense of Hope

There is no doubt that Africa's population of one billion people highlight some of the grimmest statistics in the world including the shortest life expectancy, some of the worst misrule, extreme poverty, low income, HIV, malaria and tuberculosis. In spite of the unyielding despair, Africans still hold on to optimism and hope for the future of their children and nations.

"If I put on my academic hat, I would have nothing to tell you to explain this," said Kayode Fayemi, the current governor of Ekiti State, Nigeria. "The only thing keeping people going is hope and optimism about the future that is unknown. The hope is the evidence of things not seen. I think that is the only way to explain optimism, because you can't base it on any analysis of our current condition."

When correspondent Lydia Polgreen travelled across sub-Saharan Africa back in 2006, she wrote, "Every single day lived here, each birth, wedding, graduation, sunrise and sunset is, in ways large and small, [is] a daily triumph of hope over experience. Hope, it seems, is Africa's most abundant harvest."