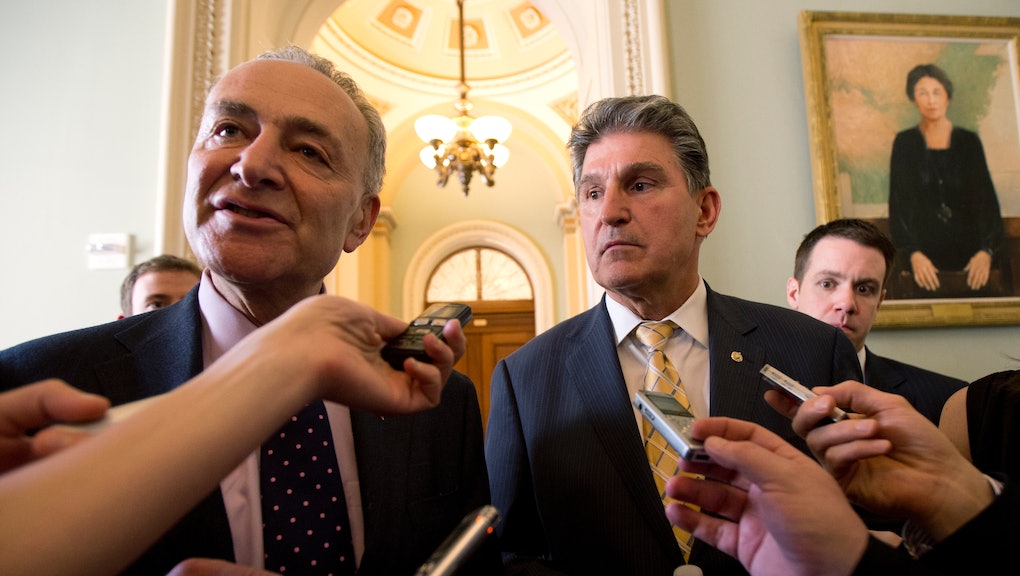 While most politicians are beholden to their party instead of the American people, they are completely destroying the American health care system. Rather than admit Obamacare is hurting Americans, most Democrats are toeing the party line. Bipartisan solutions exist to this trainwreck of a law, but many Democrats would prefer to avoid admitting the law needs to be fixed, in order to save face for the Democratic Party.

Just before Obamacare went into effect, Sen. Joe Manchin (W.Va.) acted in a way that foreshadowed how his entire party is now acting. Manchin had said, “There’s no way I could not vote” to delay the Obamacare requirement that all Americans buy health insurance (known as the “individual mandate”). Following pressure from his party, he soon changed his mind.

Within hours, Sen. Chuck Schumer (D-N.Y.) said that Manchin told him “he would vote with Democrats against a one-year Obamacare delay,” “even though Manchin supports it.” In other words, Manchin voted against what he thought was best for the American people in order to stand with his party. He had major concerns about Obamacare, but demonstrated he is ultimately beholden to the Democratic Party – not his constituents or Americans as a whole.

Now, some Democrats are finally deviating from their party, after Obamacare has caused millions of Americans to lose their health insurance. On Friday, the House will vote on a proposal to stop people from losing their insurance for one year. Republicans initiated the “Keep Your Health Care Plan Act of 2013,” and some Democrats are considering joining, especially those facing tough reelections in 2014. Others are holding out hope that Obama can come up with a fix before they are forced to support a bill that has Republican origins.

However, many other Democrats would prefer that millions of Americans lose health insurance than admit Obamacare isn’t working. As it turns out, Democratic leaders in the House are secretly warning Democratic congressmen that “votes against the Affordable Care Act are going to turn off a lot of these top national progressive donors.”

Furthermore, even if the Keep Your Health Care Plan Act or any other bill which would challenge or delay Obamacare passes the House, it will die in the Democrat-controlled Senate. The Senate is full of Democrats up for reelection in 2014 who are concerned voters will not take kindly to them flip-flopping on a bill that they have championed for years. At the very least, any fix would need to be a Democratic one and be constructed with as little Republican input as possible, so Democrats can save face.

Delaying the Obamacare mandate and other parts of the law is necessary and sensible, even if not politically prudent. Democrats have repeatedly changed the rules on Obamacare for special interest groups, so why not do so for everyone, until the law is ready for full implementation? Rather than force a broken law on Americans, it makes much more sense to work out the law’s problems and then enforce it.

If Obamacare is the health insurance solution that Democrats have long proclaimed it to be, the kinks can be worked out. Democrats who insist Obamacare is working fine are acting much like a person forcing their guests to eat undercooked chicken — it’s dangerous, and it makes more sense to put the chicken back in the oven for a little while. You don't feed your guests undercooked meat to prove a point. You cook it more. Unless, of course, Democrats believe Obamacare is unfixable.

If Democrats started caring more about the American people than the Democratic National Committee, Democratic donors, and the Democratic Party, the health insurance system could be fixed. Rather than worry about politics and appearances, they need to worry about how Obamacare is affecting Americans and how — or if — it can be fixed.