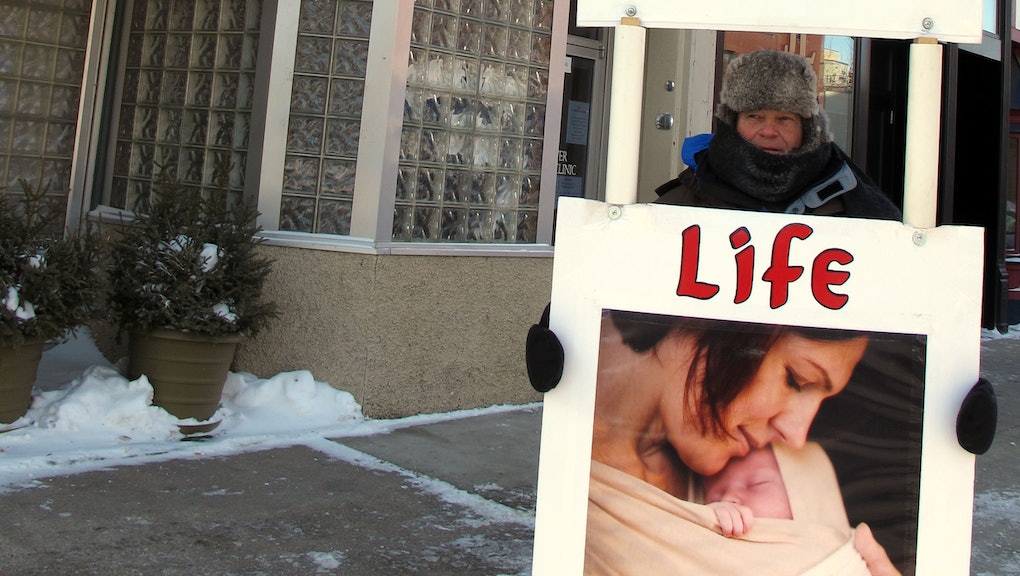 Pregnant? Scared? These "Fake Clinics" Will Make It Worse.

With trembling hands, I sat on the cold leather couch in the counseling room of the Harrisonburg Pregnancy Center, one of the roughly 2,500 Crisis Pregnancy Centers throughout the United States. Across from me sat a woman who gently guided me through a Focus on the Family pamphlet outlining the benefits of abstaining from sex. As she read the pamphlet aloud, her tone turned increasingly condescending as she uttered words like "control" and "purity."

Unbeknown to her, we had both come to this conversation under false pretenses.

For my internship, I was posing as a worried young woman hoping for advice if I was actually pregnant. The woman seated across from me planned to keep me from exercising my right to an abortion rather than giving me information about my options, an act of deception she performed many times a day, five days a week. Like many other operators of CPCs, she specifically targeted young people like who have been misled by state-funded abstinence programs in schools.

Last week, NARAL Pro-Choice America organized the CPC National Week of Action to get the word out about these "fake clinics." Crisis Pregnancy Centers, or CPCS, get a steady flow of new, young clients through deceptive advertising that promises free pregnancy tests, free baby gear like bottles and pacifiers, a comforting shoulder to lean on and, most importantly, free ultrasounds, as 10 states require these procedures be done before an abortion is performed.

While I knew enough to see through the counselor's pretense when I entered her office, most young people contacting these places are confused and scared at one of the most vulnerable points of their lives, likely to listen to whatever advice is given to them in pursuit of getting their questions answered. Since CPCs operate around a culture of shaming, they will ultimately make matters even worse.

Unfortunately, the window of opportunity for abortion closes soon after a positive pregnancy result. CPCs will do their best to make sure that the said window is permanently screwed shut, by misinforming "patients" like me.

At the end of my appointment, I received a negative pregnancy test result, as I knew I would. A sad smile crossed the counselor's face as she asked me, "Now we learned something today, didn't we? Not to have sex before marriage?"

I put on my best fake smile and nodded to keep up appearances. She handed me a bag with more pamphlets about abstinence, then guided me to the processing room. It was a small, dark room, the only sources of light a computer monitor and a Nativity scene nightlight.

An uninterested secretary asked for my personal information; I continued with my fake identity. She passed me a comment card that included a question about my satisfaction with the counselor. I wrote, "Extremely belittling — maybe she shouldn't try to push her anti-sex agenda on people."