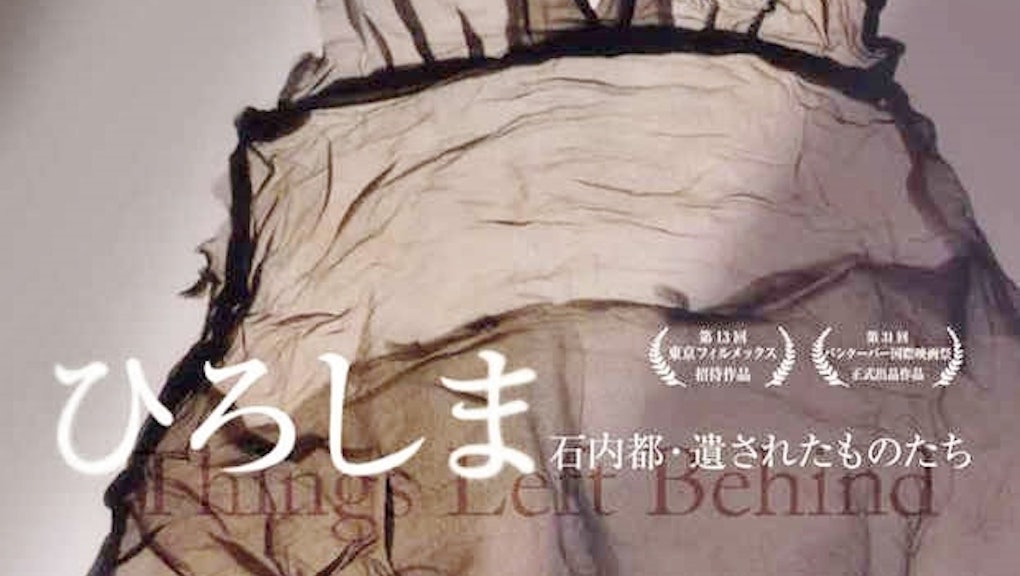 How to Talk About the Atomic Bomb

Japanese artist Ishiuchi Miyako has dedicated her life to creating artwork that reveals a hidden story of the lingering pain that her country has suffered as a result of World War II. "America never apologized," she says in a tremulous voice as she tells documentary filmmaker Linda Hoaglund about her latest exhibit in Vancouver's Museum of Anthropology called "Hiroshima." I wonder how that statement will resonate with an American audience when the film Things Left Behind makes its U.S. debut in the Documentary Festival in New York on November 17.

Ishiuchi's life-sized photography of clothes worn by the deceased is haunting. The once fashionable dresses, shoes, and kimonos are charcoaled, shredded, and billowing, but also frozen in time. It is as if they have just been hit by the atomic bomb. Ironically, the absence of people gives a human face to Hiroshima. "I want to liberate Hiroshima from its history," Ishiuchi explains to Hoaglund.

Linda Hoaglund is an interesting artist to be making a film about this exhibit. Born and raised by American missionary parents in Japan, she attended local schools in the 1960s and 70s. On some level, the film is meant to elicit guilt on part of Americans for dropping the atomic bomb. Hoaglund herself openly states on her website that she felt guilty as an American for what the U.S. had done.

Her film, Things Left Behind, can therefore be viewed as her way of coming to terms with those feelings of guilt. Tracing Ishiuchi's successful exhibit in Vancouver from 2011-12, Hoaglund interviews visitors at the museum, mostly Japanese Canadians, to capture their reactions to Ishiuchi's artwork. Many commented on the visceral quality of the photographs and how they evoked emotion, something which tends to be left out in history textbooks.

In school, we just "learn the facts," said Ishiuchi, we don't experience a "personal reaction." Behind each of these items is a story. As Roland Kets from the New Yorker describes, these are "more than just objects." One of the shoes belonged to a little boy who walked home after the bomb exploded and then dropped dead. The exhibit is filled with similarly heart-wrenching tales.

However, for every documentary film about Hiroshima or Nagasaki, there's one about the Rape of Nanjing or the Bataan Death March. Each of them is intended to be heart-wrenching. Things Left Behind, laden with sympathy and guilt, makes it easy for viewers to forget about Japan's own war crimes. In 2005, China and South Korea accused the Japanese government for rewriting history by erasing their misdeeds from school textbooks. Mariko Oi writes in the BBC News about her shock at discovering that not many Japanese students know about the Mukden Incident, the Rape of Nanjing, or comfort women. Such atrocities were consigned to footnotes.

There are no right or wrong stories, just different stories.

The problem with representations of historical events in popular culture is that they tend to reveal only one piece of a larger puzzle. This is a historian's biggest pet peeve. Hollywood movies about World War II (for example, Pearl Harbor or Shanghai) tend to possess an element of sensationalism. They are made for the purpose of entertainment. As a result, viewers may not regard these films as accurate portrayals of history. This is different with documentary film when education, more than entertainment, is the prime objective. My main concern therefore, with Things Left Behind is that some viewers may take what they see at face value, or as the whole truth. In reality, it's simply an artistic representation of an event within the larger context of World War II history.

Thinking about my then 17-year-old grandfather who climbed into a boat with only the clothes on his back, bidding farewell to his family in China forever in order to escape the Sino-Japanese war, I wasn't sure what to feel as I watched the film. I know that my grandparents' families suffered greatly during the Japanese occupation of China and British Malaya. Yet for every story like this, there's bound to be another story from a friend whose Japanese-American grandmother was sent to an internment camp. There are no right or wrong stories, just different stories.

Many viewers will have to grapple with not knowing how to feel when they watch Things Left Behind at the Documentary Festival this weekend. So the best message that we should take from it is the sadness of death and destruction, as well as the need for peace. We are three generations removed from World War II, and it is important for young people to remember it. Everyone my age has a story to tell about their grandparents' youth during the war no matter where they are from. We should keep on passing down these stories to future generations and listening to other people's stories. Likewise, Things Left Behind can be seen as just that — another set of stories to be passed down, another point of view to be heard.

Things Left Behind premieres at the DOC NYC Festival on Sunday, November 17. For more information about the screening and to purchase tickets, check out the film's website.