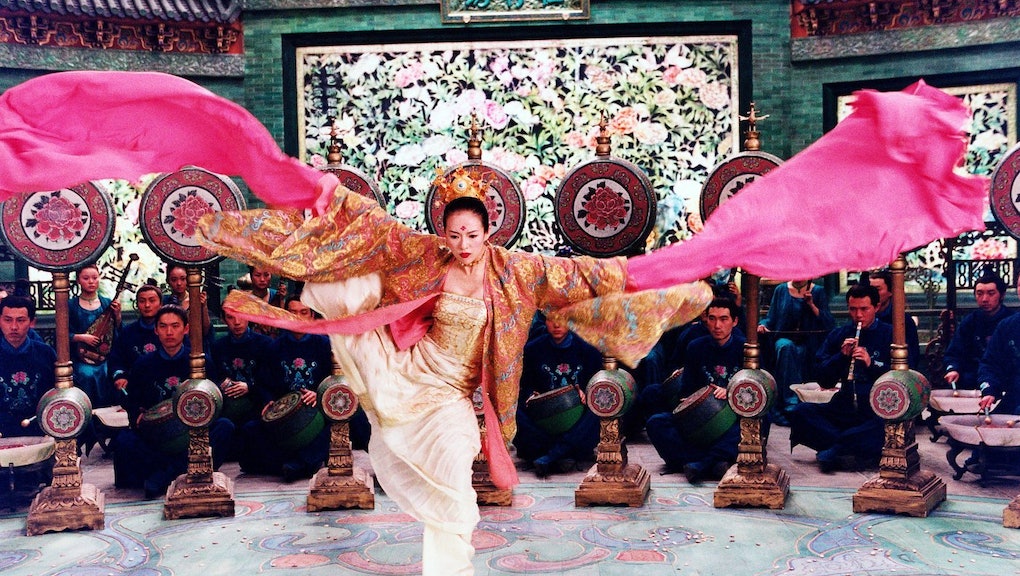 The 8 Most Kickass Ladies Of Martial Arts Cinema

When people make sweeping, ethnocentric statements such as "China, Thailand, Indonesia — pretty much all of Asia — are hot beds of patriarchy where women are inferior beings, subservient to the males in their life and denied subject status," it's always irksome. This is not just because it stereotypes the Asian male, but also because it implies that the Asian female is so weak that she is incapable both of knowing what her rights are or of taking them by force. As always, however, if you want a lesson in what a culture stands for, look to their movies. And nothing says Asia like martial arts movies.

So, for all of you who feel that Asia is the worst place to be a woman, tell that to the ladies below — they will take your condescension and, just as they have done with the boys' club that was Hong Kong cinema, they will kick its ass.

Although her presence in early 20th-century cinema means that only the most dedicated of fans have bothered even to research her career, Josephine Siao is a trailblazer for all the ladies of martial arts. As the star of countless action and wuxia films in the 1960s, Siao paved the way for movies that would allow women central roles, went on to direct a very well-regarded cult film, and has since dedicated her life to fighting child abuse. Fans may have caught a glimpse of her in Jet Li's Fong Sai Yuk film series or Stephen Chow's parody of Fist of Fury.

A frequent collaborator of Siao's, Connie Chan is yet another star of significant martial arts films of the mid-20th century, where she gained teen idol status and starred in everything from comedy to drama.

Born into poverty, Chan was given away at an early age and raised by actors at one of the Peking Opera Schools, which is where she learned martial arts. Jackie Chan attended the same schooling system. Her popularity was partially the result of her onscreen pairing with Siao, who frequently played her rival and — when performing male roles — her love interest.

Perhaps one of the best comedians of martial arts cinema, Yuen Qiu is yet another member of the Peking Opera School system, even sharing the same master as Jackie Chan. Unfortunately, Qiu's career has been a bit on the uneven side.

Because the early 70s were not the busiest time for the industry (Bruce Lee hadn't yet risen to stardom and the demand for flying kicks was, therefore, pretty low), Qiu started her career in a fairly unreceptive market and, even though she netted a minor role in the 1974 James Bond flick The Man with the Golden Gun, Qiu's career was still stagnant at best. However, with a slew of low-budget films — one even using Jackie Chan's picture as promotional material, despite the actor's relatively small role — Qiu managed to survive in the industry. Fans may remember her as the landlady in Stephen Chow's Kung Fu Hustle, where she perhaps — for once — got a chance to truly demonstrate her comedic genius to an appropriately-sized audience.

The first and only American on the list, Cynthia Rothrock was discovered by legendary Chinese studio Golden Harvest while they were searching for the next Bruce Lee in America. Instead, they found the Taekwondo-practicing Rothrock, who quickly rose to fame with the 1985 hit Yes, Madam, taking on some of the Hong Kong martial arts industry's biggest names in the process.

Her successful collaboration with the studio convinced her to stay in Hong Kong, where she made even more successful films, including Millionaire's Express, where she shared the screen with Jackie Chan's Peking Opera "brothers" Sammo Hung and Yuen Biao. While the scope of her work has since become less ambitious, fans may still remember that she was the inspiration behind the Mortal Kombat character Sonya Blade.

As one of the few Hong Kong stars to gain international fame, Michelle Yeoh is the epitome of success in the martial arts world, ranking as highly in the eyes of fans everywhere as any Bruce Lee, Jackie Chan, or Jet Li. Although her training was originally in dance — as opposed to combat martial arts — Yeoh still became famous for doing her own stunts, and was one of the few females Jackie Chan reportedly wasn't hesitant to work with. That faith in her abilities was well-founded, and allowed Yeoh to work in some of the most successful films of the 80s and 90s.

After a minor role in Chan's all-star hit Twinkle, Twinkle Lucky Stars, the actress rose to prominence as the lead in the aforementioned Yes, Madam and went on to work in classics such as Super Cop and Tai Chi Master.

She found international success with the James Bond film Tomorrow Never Dies, made tremendous impact in Ang Lee's modern classic Croching Tiger, Hidden Dragon, and starred in the well-received but controversial Memoirs of a Geisha. She was more recently seen in The Mummy: Tomb of the Dragon Emperor, provided voice-work for Kung Fu Panda 2, and is slated to return for the sequel to the aforementioned Ang Lee classic.

As the only woman on the list whose international success rivals Yeoh's, Zhang Ziyi is yet another performer who has a background in dance but was able to break into the martial arts industry — largely due to a very successful co-starring role in Crouching Tiger, Hidden Dragon. Following her work in this Oscar-winning drama, Ziyi also starred in Jackie Chan's Rush Hour 2 and Jet Li's Hero. And, just when fans started to worry that she would forever be relegated to the role of support-cast in successful movies, Ziyi came into her own with House of Flying Daggers and Memoirs of a Geisha. Although she may no longer be as popular internationally — her only recent works known outside of China include voice-work for 2007's TMNT and The Grandmaster — her domestic career is still going strong and she is slated to appear in a historical epic by legendary director John Woo.

At this point, it doesn't matter that Maggie Cheung has no formal martial arts training whatsoever. Although she was, for the most part, originally hired simply for her looks, Cheung still went from being a Miss World semifinalist to becoming one of the best martial arts stars the industry has ever seen. A multilingual and cultural phenomena that never abandoned her passion for acting, Cheung supplemented her performances in art house films with a steady dose of Jackie Chan cinema through movies such as Twin Dragons and the Police Story series.

At the same time, she worked in star-studded B-films like The Heroic Trio. Even though she has starred alongside comedians such as Chan and Stephen Chow, she never stopped acting in the best dramatic roles the Hong Kong film and art house industries had to offer. Her presence always brings much acting credibility to a martial arts film — a genre that could stand to improve the emotive qualities of its thespians. Her selective approach to roles has made her one of the genre's most iconic performers.

As we have seen with stars like Tony Jaa and Iko Uwais, there has generally been a trend over the past couple of years to move the martial arts industry away from Hong Kong and towards other, less well-known film industries of Asia. For that reason, this list culminates with Thai taekwondo practitioner and actress Yanin Vismitanada, known internationally as JeeJa Yanin. As the star of the 2008 hit Chocolate, Yanin rose to fame and quickly cemented her status as the next great martial arts find with Raging Phoenix. Both films have been choreographed by Panna Rittikrai, who fans may know as the stunt choreographer behind many of Tony Jaa's films. Yanin has recently starred with Jaa in the sequel to his 2005 hit Tom Yum Goong, and although it does not have much international acclaim, there's no denying that Yanin now ranks as one of the best stars of martial arts cinema today.

So, who are your favorite kickass ladies of martial arts cinema? Sound off in the comments below.

Author's note: special thanks to PolicyMic pundit Kela Stein for inspiring this article.