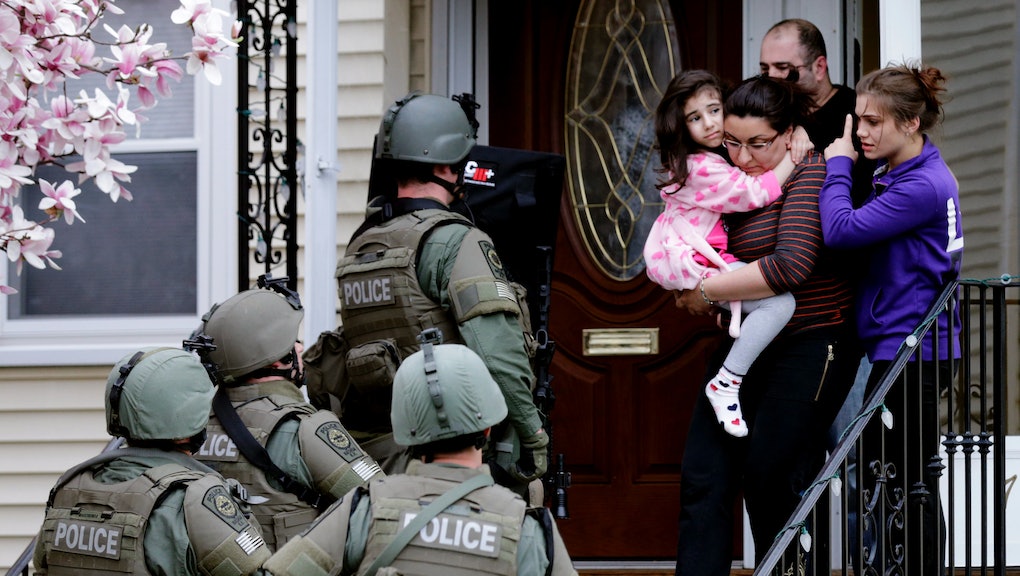 Police misconduct is out of control in Indiana. In 2010, two Indiana police, including a captain, slapped and tasered a 10-year-old boy at a daycare center. That same year, an Indianapolis police officer killed a motorist while drunk and on duty. And the city of Indianapolis recently threatened citizens with a $2,500 fine just for protesting tickets or filing formal complaints.

Thankfully, the Indiana legislature just passed a law that will give Hoosiers some recourse against police injustice, allowing citizens to use force against police officers who unlawfully enter their homes. The bill is a huge victory for the Fourth Amendment. But by also putting increasingly unlawful police conduct under the microscope and putting some restraint on police, the Indiana legislature is giving us an example of how to further restore law enforcement agencies to their constitutional roles.

Nationally, police misconduct is even worse than in Indiana. As detailed by the likes of great journalists and constitutional lawyers like John Whitehead, Radley Balko, and Will Grigg (just to name a few), in the past 30 years American law enforcement agencies have morphed into federally-funded paramilitary units whose often-deadly actions receive incredible amounts of protection and immunity.

Almost daily, there are incidents of police conducting illegal cavity searches at traffic stops, dogs being shot, local sheriffs ignoring laws that expand individual freedom, murders of the mentally handicapped, wrongful convictions by hawkish prosecutors, and countless stories of innocent people being on the wrong end of the state's enforcement arm. All of these heinous acts, and the police's opposition to any legal restrictions on their powers, are masked by the holy writ of "officer safety."

The most important weapon in the fight against these police abuses is the ability of the internet to turn local stories into national ones. The cell phone (or dash) camera, combined with the interconnectedness of the web, has replaced the musket as the best defense against government abuse. Thanks to this, millions and millions of people are now able to see the reality of what police departments have turned into.

Unfortunately, this hasn't stopped the steady expansion of the American police state. Even though private violent crime has been on a steady decline for the last 20 years, police activity has exploded. There are over 50,000 SWAT raids conducted annually in the U.S., and even smaller cities with virtually no crime are being swallowed up by Homeland Security grants that arm police with weapons usually reserved for foreign subjects. While the Posse Comitatus Act theoretically protects American citizens against the military being used to enforce law and order, what does it matter when police agencies — in their manner, dress, weaponry, tactics, and aggression — resemble an occupying army?

This map shows the rate of police brutality across the U.S. in 2010 (Cato Institute)

And to make matter worse, what happens to those few, brave cops who actually want to protect people and report these unlawful acts committed by their fellow officers? They are either fired or met with stiff resistance.

What the police say about brutality (Graphs.net)

There are many reasons for this radical transformation of police power. The drug war — especially since the Reagan administration — amped it up; and the politicization of society — which makes nearly every action short of breathing subject to detailed state regulation — requires massive amounts of police power to enforce.

However, there is both historical and legal precedence for a check against growing police abuse. In both English common law and American law that was adopted when this country was formed, it was not just the right but the duty of citizens to resist unlawful arrests and abductions. The classical liberal tradition holds that this is a hallmark of a free society and that it represents one of the strongest bulwarks against abusive state power.

In a time when some politicians want to give police the authority to conduct unannounced, warrantless house searches to enforce gun laws, just imagine how much freer and "secure in [our] persons, houses, papers, and effects" we would be if the right and duty to resist unlawful state action was codified throughout the country.

Since local police departments are now quickly becoming vestiges of the Pentagon and continue to threaten the life, liberty, and property of every American, severe restraints are needed now more than ever. Ultimately, the real problem lies with trusting our security to an institution with a monopoly on aggression and violence; the free market can and does provide law and order cheaper and safer.

But for now, let us hope that the steps taken by the Indiana legislature to restrain the heart and soul of state power continue and are emulated throughout the country.