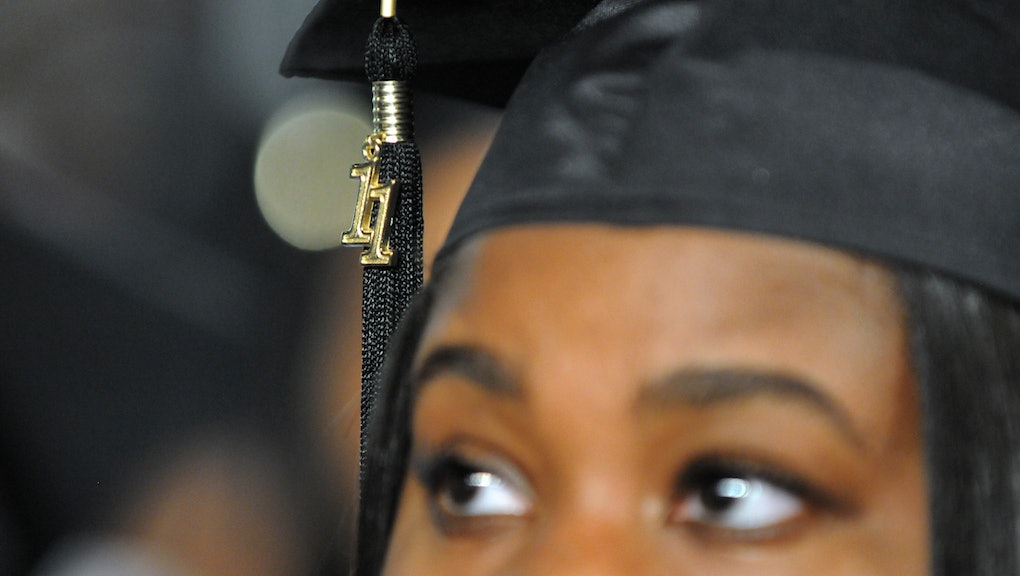 College Taught Me That As a Black Woman, I Had To Wear Pearls

Editor's note: This article has been updated.

Though nine years have passed by now, Nelly is still waging a public war against Spelman College students after a melee between members of Spelman’s Feminist Majority Leadership Alliance (FMLA) and the St. Louis rapper led to the cancellation of a bone marrow drive. FMLA members wanted to converse with Nelly over the controversial images in his "Tip Drill" video, but the famous rapper was only interested in finding a bone marrow match for his sister, Jacqueline Donahue. Nelly canceled and pulled his funding from the bone marrow drive, but he placed the blame on Spelman.

The old feud was reignited when Marc Lamont Hill asked Nelly about the 2004 incident during a recent Huff Post Live interview. In hindsight, Nelly said he would've "kicked somebody's ass" because the protestors robbed him of an opportunity to save his sister. (She died from leukemia in 2005.)

Members of the FMLA responded during a subsequent Huff Post Live interview, stating that Spelman had the responsibility to protect its female students. As Asha Jennings said, "If there's anybody that has an obligation to young black girls in the community, it's us."

Dr. Moya Bailey added in an open letter that "the heterosexist and cissexist nature of these images reinforces the idea that women's sexuality, our bodies, are not our own and are ultimately in the service of men's needs." I agree, and I side with Bailey and other members of the FMLA. Rappers should be held accountable for their portrayals of black American womanhood.

However, I am troubled by the notion that Spelman and other historically black colleges and universities (also known as HBCUs) are inherently safe spaces which rile against rappers intent on harming black womanhood. HBCU students and alums need to acknowledge that our beloved alma maters also police black womanhood and black sexuality.

In Alice Walker: A Life, biographer Evelyn C. White recounts how Spelman stifled Walker because her radical politics didn’t align with the school’s administrators. She describes Spelman as a place where women are "conformed" instead of celebrated.

I can relate. The words still sting almost four years after they were uttered to me: "Your reputation will precede you, so we wear pearls. We cross our legs at the ankles. We keep our legs closed. Is that clear?"

I was not attending a father-daughter purity dance. I was on a college campus attending my first session in a long-weekend of similar "don't be a slut" talks from several administrators. I can guarantee that at least 80% of female students at HBCUs have heard variations of this same "respectable ladies don't tarnish their reputations" speech. Women are told to conform to an almost Stepford Wife-esque mold of womanhood to protect their reputation and the prestige of the school.

Queer identities, for men and women alike, are rarely nurtured on HBCU campuses. In 2012, Bowie State University became the first HBCU to create a LGBTQ resource center. Only two other HBCUs have followed suit, because these schools are notorious for their conservative Christian values and rigid traditions.

Black female students are encouraged to conform to an unattainable ideal of black womanhood, even at HBCUs. We're supposed to be dainty, quiet and dedicated to uplifting the community like Alabama State University alum Rosa Parks. We're forbidden from twerking. We're given strict curfews. We're told to wear pearls and stockings because that's what ladies do.

Some HBCUs specifically adhere to strict dress codes. Morehouse College has an "appropriate attire policy" that outlaws grills, do-rags and saggy pants. The Hampton University Business School forbids students from wearing dreadlocks. It's a modern twist on W.E.B. DuBois’ talented tenth philosophy: HBCU students must excel in all areas of their lives to gain the respect of white folks and to "guide the mass away from the contamination and death of the worst, in their own and other races."

Our pearls, stockings and degrees are supposed to make HBCU alum pillars of respectability. The upshot of these policies is that students are taught to value belts instead of turning their gaze on the power structure that sees sagging pants a form of deviance.

The policing of arbitrary behaviors further distracts from the fiscal dilemmas facing multiple HBCUs. A report from Diverse Education found admissions at HBCUs has declined by 14% because of the federal requirements for PLUS Loans and reduction of Pell Grants. Shrinking endowments have forced several HBCUs to close their doors. St. Paul's College in Virginia recently closed and Morris Brown College in Atlanta lost accreditation and filed Chapter 11 bankruptcy. Retention is low. Criticism is unyielding. And yet, HBCUs are still concerned with how students present themselves publicly.

It all stems back to respectability. HBCUs are amazing institutions which churn out the bulk of black America's middle-class, including 85% of doctors and 60% of engineers. These utopias of black brilliance produce amazing alum, including the Rev. Dr. Martin Luther King and Oprah. But creating cookie-cutter models of black womanhood won’t save HBCUs. It will produce women like me, who graduate and enter the world more educated, polished, and cultured than we were when we entered, but at what cost?

It is important to hold Nelly and other hip-hop artists responsible for their imagery and to encourage multiple representations of black womanhood; it is crucial for HBCUs to create safe spaces to develop identities that don’t fit the respectable framework.

Those painful words still echo in my ears; I still have no idea how crossing my legs or wearing pearls will save HBCUs.