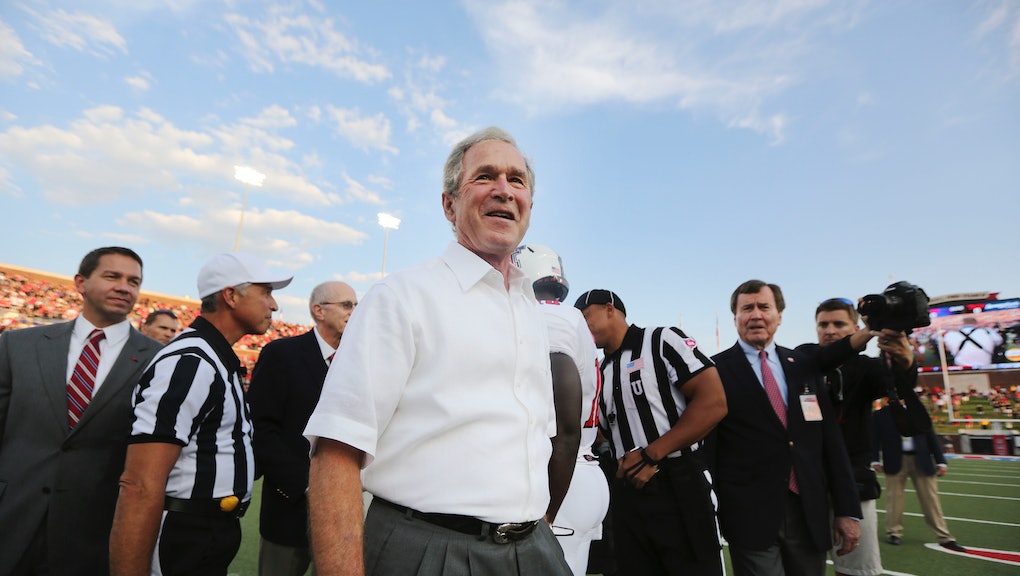 On Thursday former President George W. Bush will speak at a fundraiser in Irving, Texas for the Messianic Jewish Bible Institute (MJBI), whose chief aim is “to bring Jewish people into a personal relationship of faith” with Jesus by getting Jews to recognize that he is supposedly the Messiah.

As unexciting as this speaking engagement is, it has nonetheless caused something of an uproar among many prominent Jews, who for some reason are incredulous at the prospect of the born-again Christian Bush attempting to help win converts to the cause. Truth be told, Bush’s appearance is completely in line with his religious beliefs, which are simply a given among born-again Christians like himself.

Nonetheless, controversy abounds over Bush's support of these Jews for Jesus.

Rob Eshman wrote in the Jewish Journal, "Bush … is helping to raise money for a group whose reason for being is to stop there being Jews. It sounds alarmist, but there it is. Success for the group Bush supports would mean no more Jews."

In the Jewish Daily Forward, the influential rabbi David Wolpe decried the entire messianic enterprise, saying, "The sudden rise of 'Messianic Jews' owes more to a clever way of misleading untutored Jews than to making theological sense. It should not receive the imprimatur of a former President of the United States."

And Abraham Foxman, the national director of the Anti-Defamation League said, "I know that he does not represent or embrace the purpose or the mission of this group, and therefore I wish he would not speak there."

Clearly there is great discomfort among many Jews who are understandably a little sensitive about being targets for conversion, though certainly in a less aggressive manner than in days of yore. However, Bush’s appearance cannot possibly come as a shock to anyone who has thought seriously about the core principle of his faith – namely, that those who do not accept Jesus as Savior are going to hell. These unfortunate souls include non-Messianic Jews (which is the vast majority of Jews), Muslims, Hindus, Sikhs, Buddhists, deists, atheists, and others who reject the idea that Jesus was the son of god and died to save humans from sin.

This belief is especially pronounced among adherents to evangelical and born-again Christianity. Bush is one such adherent, which means that he believes Jews are going to hell. Of course, he has never said this publicly, but it is what he and millions of other Christians think simply by virtue of their belief in the doctrine of vicarious redemption. It isn’t a very comforting belief no doubt, but it is quite fascinating that many Jews – even Jews who supported Bush in office – are aghast that the president would actually lend support to an organization that in his mind, is trying to save Jewish souls from damnation.

While it should not come as a shock, Bush’s appearance should give Jews pause. For all of the support that the Christian Right has lent to Israel over the years, for them, Jews are a means to an apocalyptic end wherein Jesus returns and those who have accepted him are raptured into heaven, while the Christ-rejecters will be left behind to suffer their fate. This unpleasant eschatology is the driving force behind the rabidly pro-Israel stance of the American Christian Right, which loves Israel from a biblical perspective, but sees Jews as having a one-way ticket to hell.

From Bush's perspective, not only is there nothing wrong with this promotion of the MJBI, but it is the most moral and godly thing he can do because it seeks to spread the word of Jesus. If a Jew or anyone else is surprised or disappointed by the former president's appearance on Thursday, then they have either not given much serious thought to his personal religious beliefs, or have chosen to willfully ignore them.