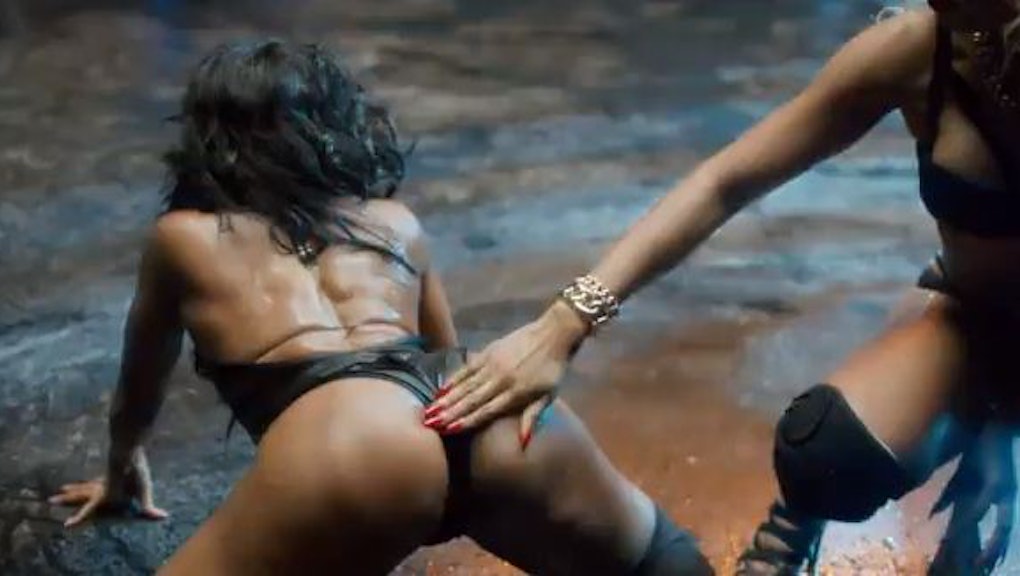 Lily Allen's New Video Doesn't Empower Me, Or Anyone Else

"I'll buy you a drink if you show me your tits," a man said to me. It was amateur strip night at the local peeler club. I turned to look at him, surprised that in a place full of women being paid to perform for him, he had to come and bother me.

I had come to observe, to figure out why this old boy's club was being infiltrated by women and claimed in the name of grrrrl power. I didn't plan to participate. But a lot of people were not content to let me observe from the sidelines. The MC told the servers to talk me into it. The servers told him (and me) that I didn't look like the kind of girl who would do this, anyway.

"You can tell 'em as soon as they walk in the door — they're desperate for attention," she said with a laugh.

That night at the strip club, I wanted to see if being sexy, raunchy, willing and wild felt empowering. I wasn't convinced. That's how I felt watching British singer Lily Allen's new video, "Hard Out Here" — not quite convinced.

The video starts out promising enough for cultural commentary. Allen is getting lipo while her manager, a dowdy man in a suit, criticizes her for letting herself go and lists off the talk show hosts who are not interested in seeing her. She gets out of the OR, rips off the hospital gown ... and it all goes downhill from there.

Really, most Allen's video just makes no sense to me. Not because I don't get it, but because I've been around long enough to see this played out over and over.

Feminist anthem? Nuh uh. She's (apparently) subverting sexist tropes with zero recognition of the racist tropes she is playing into, as Mia McKenzie notes at Black Girl Dangerous. Like Miley Cyrus before her, Allen hired mostly black dancers for her video — looks like some more hipster racism. Julianne Escobedo Shepherd at The Hairpin called these actions the "ultimate in white feminist privilege." When you think about the storied history of white feminist women crying out for the right to work while ignoring the work of women of color raising their children and cleaning their houses, you have to admit she's got a point.

It's hardly surprising, too, that Allen's defense of the video — that it has nothing to do with race at all — is unconvincing. I mean, this video is from the same woman who Twitter-fought with Azaelia Banks, and ended up tweeting a dick pic where the penis has an afro and a big gold chain. (NSFW.)I'd call it blackface, I guess, but it's a penis.

There are a few things about Allen's video I do understand and appreciate — like the riff on "Hard Out Here For A Pimp", or how Allen's song is meant to be a satirical commentary on the pressures to self-objectify. But … I mean, we do know this already, don't we? Raise your hand if it's news to you that the motto "sex sells" really means "women presenting the promise of sex or oozing sexiness" sells.

That's what I thought.

So what's subversive about going along with the status quo? Allen sings, "Don't need to shake my ass for you/ 'cause I've got a brain" while her video features shaking asses almost exclusively. Is that called having your cake and eating it too?

The actual director of the video, Chris Sweeney, said in an interview with Noisey thatyou totally get a pass for being sexist when you are being satirical. He told Noisey that he and Allen spoke with all of the dancers beforehand, and they thought the idea was hilarious.

I think we can safely say that the dancers in Allen's video need to make a living too, and I don't hold anything against them for it, but "because I got paid to" is just not the same as "this turns me on." Sure, I guess it's fun to be in on the joke, but that's not the same thing as subverting the narrative.

Allen's song, for all its attempted satire, misses the mark.

What did turn me on (to feminism) was what Ariel Levy argued about videos like Allen's in her book Raunch Culture. Levy critiques the highly-sexualized American culture in which women are objectified by others, objectify one another, and are encouraged to objectify themselves. I've never been able to shake that unsettling feeling when supposed empowerment looks a lot like subjugation.

As Levy said, "Why is this the 'new feminism' and not what it looks like, the old objectification?"

Now, I understand that Lily Allen is a person, making her a wealth of contradictions, just like I am. I'm an ardent feminist, but when I hear the word empowerment, I roll my eyes so hard I nearly sprain them.  I was the lead organizer for Slut Walk and yet I challenge idea that a word like slut can ever be taken back. It's a word used to oppress and demean me and I don't want it — I do want to make it meaningless. And not in a Mean Girls way.

When I watch this new video, I see again what I saw happening in the strip club I visited: a performance of sexuality for male observers. It wasn't about me and my own sexual power; I had to be spectacle to be welcome at all. The freedom to be sexually provocative or promiscuous isn't really freedom when it is only accessible to certain people — the very same people already benefiting from the narrow interpretation of beauty and sexuality.

In her new video, Lily Allen is not subverting a norm but adopting a new one, and in doing so playing the safe role of the attractive white celebrity under the same male gaze she includes her video. She's pushing precisely zero boundaries.

Allen's new video is faux-liberation; it's not a marker of how far we have come, but of how far we have left to go. Self-adopting insults like "bitch" and agreeing to objectification furthers the career of Lily Allen, the cheeky exhibitionist celebrity, while doing nothing to help attain the goals that feminism has yet to achieve.