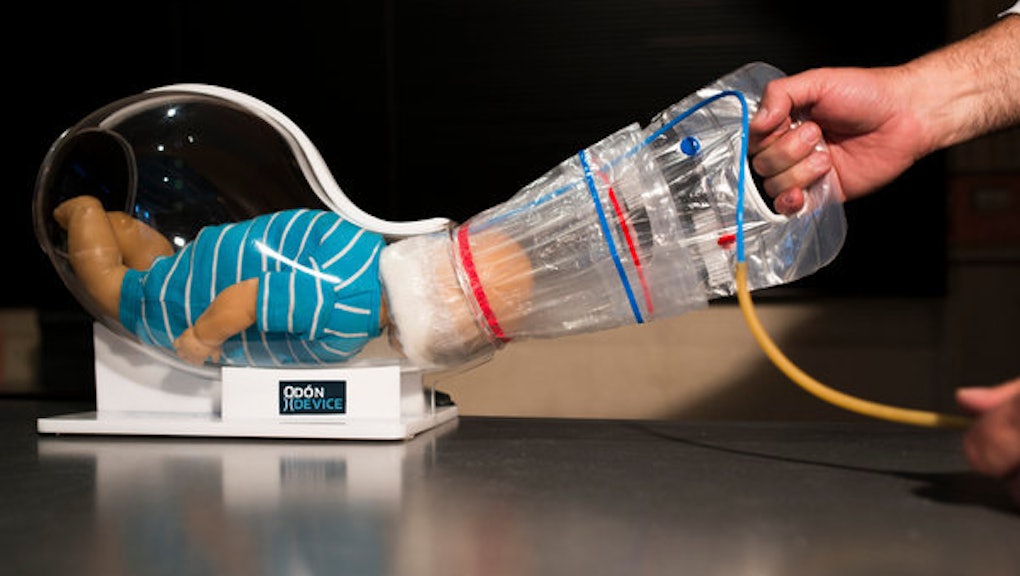 YouTube, it turns out, inspires more than just viral orgasm videos and a feisty 14-year-old named Lohanthany. After watching a YouTube video of how to retrieve a cork lost in a wine bottle with a plastic bag, Argentinean mechanic Jorge Odón went to sleep and dreamed a medical epiphany.  The next day, Odón built the first prototype of his device, which will be used to ease obstructed childbirths, in his kitchen. Using a glass jar for the womb, his daughter’s doll for the distressed baby, and a fabric sleeve sewn by his wife, he imitated the technique used to remove the cork from the wine bottle with the doll. The inflated bag gripped the doll’s head, and the Odón Device was born.

So far the device — now made with a lubricated polyurethane bag and an automatic inflation tool — has won the endorsement of the World Health Organization (W.H.O) and grant money from the United States Agency for International Development and Grand Challenges Canada.

Doctors like Mario Merialdi, chief coordinator of the W.H.O., have championed the device and claimed it’s the first major advancement in "this critical moment of life in years." The alternative options currently used, large forceps or suction cups attached to the baby’s scalp, can be dangerous to both the mother and fetus in untrained hands.

Annually, about 260,000 mothers die during childbirth due to complications — 99% of which occur in developing countries. But even in the U.S. today 15 out of every 100,000 women die during childbirth, making it the sixth leading cause of death for females between the ages of 20 and 34.

One of the most common causes of maternal death during childbirth is obstructed labor, or "when the presenting part of the fetus cannot progress through the birth canal." Usually this results in cesarean section, but often in developing countries, exhausted mothers-to-be whose contractions have stopped or whose fetus cannot be born due to pelvic shape and width, are left on their own. The Odón device is expected to have the potential to reduce the number of maternal deaths in developing countries and the number of Caesarean sections in wealthier nations.  Each device will cost less than $50 to make, and though it’s too early to know what BD will charge for them, they are planning to reduce the price for poorer countries.

So far, the Odón device has only been tested on 30 Argentinean women, but will soon be tested by the W.H.O on 100 women in normal childbirth in China, India, and South Africa, and then on another 170 women in obstructed childbirth.

Emblematic of today’s information-democracy, the story of the Odón device is decidedly unlike that of its predecessor, the forceps. One of the last advances in dealing with difficult childbirth, the forceps were kept a family secret of the Chamberlains for over 100 years, available only to the kings they served and their rich cronies. According to Merialdi, it had to be a mechanic like Odón — someone outside the field of obstetrics — to solve this problem. Good thing Odón likes wine and YouTube.