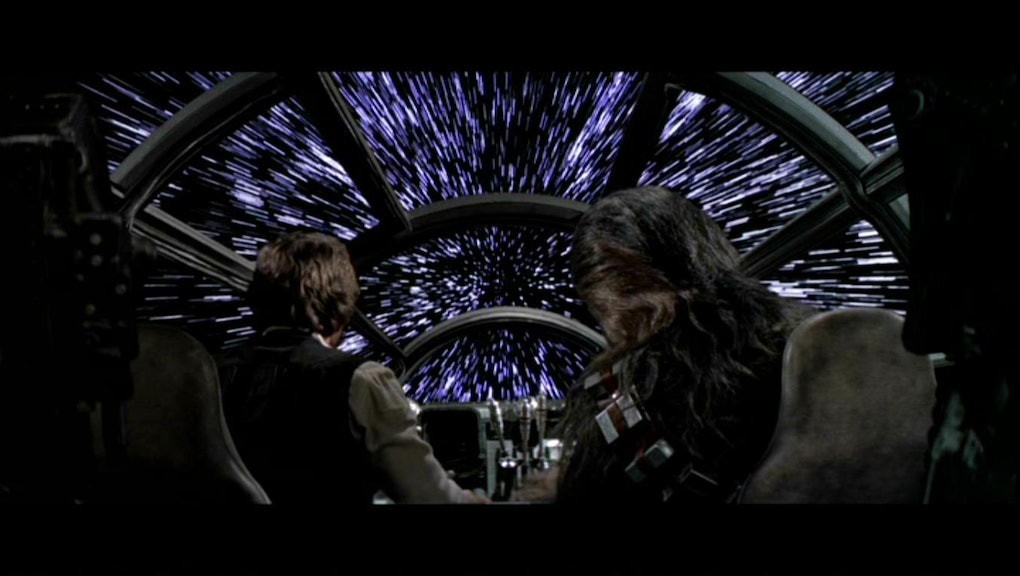 6 Sci-Fi Inventions That Could Be Real In Our Lifetime

Anybody who's read a sci-fi novel or seen a sci-fi flick has dreamt of teleportation, hover biking, or immortality. Few people know how close science is coming to achieving those dreams.

Sci-fi films seem to be experiencing a resurgence. Marvel Comics franchises always receive top billing in theaters, and the re-imagined Star Trek from JJ Abrams has been wildly successful.

On some level, this is because science-fiction is becoming less fiction and more science. Just think what millennials have witnessed in the span of time that took us from Sega Genesis to PS4. For many of us, Zack Morris' gargantuan behemoth of a cell phone was our first interaction with mobile communications. Now we have the iPhone.

The gizmos and gadgets we see in the movies today have a real possibility of being in our hands and homes tomorrow. What humans can accomplish is only limited by what humans can dream. And we've been dreaming a lot, lately.

It turns out that a lot of the really cool technology coming out today, tomorrow, and over the next hundred years was imagined by science fiction authors, screenwriters, directors, and producers. Here are six almost-real, mind-blowing inventions that have been with science fiction fans since Han Solo made the Kessel Run in less than twelve parsecs.

This has been a fantasy of mine since I first started watching Star Trek: The Next Generation with my dad. Teleportation is now on its way out of my dreams and into my life.

A couple of years back, Chinese physicists (this is why Americans need to up the game in science education) successfully teleported photons over 97 kilometers (roughly 60.2 miles) thanks to a phenomena called quantum entanglement or "spooky action at a distance" where one atom interacts and adopts properties of another, thus allowing information transfer even over great distances.

Hover technology has been the dream of every boy and girl, man and woman since they first saw Back to the Future Part II. Of course, Marty McFly wasn't the first to float above the ground. The landspeeder Luke Skywalker takes out to search for R2D2 is also key to the hovercraft mythology.

Chris Malloy of Australia must have been born with a high presence of midi-chlorians (look it up, wannabe geeks) in his blood because he's invented a hover bike that could theoretically travel up to 170 mph and take you as high as 10,000 feet in the air!

The name conjures up images of Harry Potter for most people. Long before Harry learned his fate as the boy who lived, science fiction was tinkering with the technology in such films as Predator and Die Another Day.

Researchers at the University of Texas at Dallas campus have invented their own invisibility cloak utilizing the "mirage effect," or photothermal deflection, which we've all seen at one time or another on a hot day.

Probably the most badass idea to undertake, warp drive has been a staple of Sci-fi novels or movies, such as Gene Roddenberry's Star Trek and Isaac Asimov's Foundation series. It's the most effective way to travel across long stretches of the space. On the updated Battlestar Galactica, it was called an FTL Drive, while Star Wars used hyperdrives to enter hyperspace. These "jump drives" are devices that allow for faster than light travel, a necessity if humans are ever to explore deep space in any meaningful way.

Currently, a team at NASA is working on this technology, which works by warping space-time, causing the space in front of a spacecraft to contract while the space behind it expands. Scientists working on this technology theorize that humans could reach speeds as high as 10 times the speed of light. So what's standing in NASA's way? That would be a stubborn little thing called antimatter.

When Luke Skywalker battled Darth Vader towards the end of Empire Strikes Back, he was outmatched by his dad and got his hand chopped off. Luckily, a long, long time ago in a galaxy far, far away he could get a brand new hand that looked, felt, and sensed just like the old one.

Today, the large number of returning Iraq and Afghanistan vets with missing limbs due mainly to IED attacks has increased the demand and pressure for sophisticated bionic limbs.

A couple of years ago, scientists at Duke University were able to record brain activity in monkeys and then create computer algorithms that could map certain neuronal patterns to arm motions. This enabled them to give the monkeys mind control over a virtual arm. Furthermore, scientists were able to utilize "intracortical microstimulation" which stimulates sensory neurons in the brain, allowing the monkeys to feel the virtual objects. Instilling the ability of "touch" into artificial limbs is a colossal step towards creating bionic body parts to help rehabilitate those who have been seriously injured.

Ok, Ok, immortality wasn't invented by the Sci-fi genre. Ever sense man was aware of his mortality, he's been looking for ways around it. For some, dying is just as important to the human condition as living. Films like Groundhog Day make a pretty strong argument for the perils of immortality.

2001's Vanilla Sky — based on the Spanish film Abre Los Ojos — explores the idea of extending consciousness after the body dies via a lucid, waking dream state. James Cameron's 2009 Avatar was centered on technology that allowed a person to be downloaded into another body. Now, Russian media mogul Dmitry Itskov is throwing his billion dollar fortune at combining the two aspects to extend our lives indefinitely.

His 2045 Initiative aims towards making humans immortal by 2045 via a four-stage process that includes transferring our consciousness into an artificially created avatar, brain-computer interfacing robots, and converting ourselves into holograms that can be projected across the world and possibly the universe.