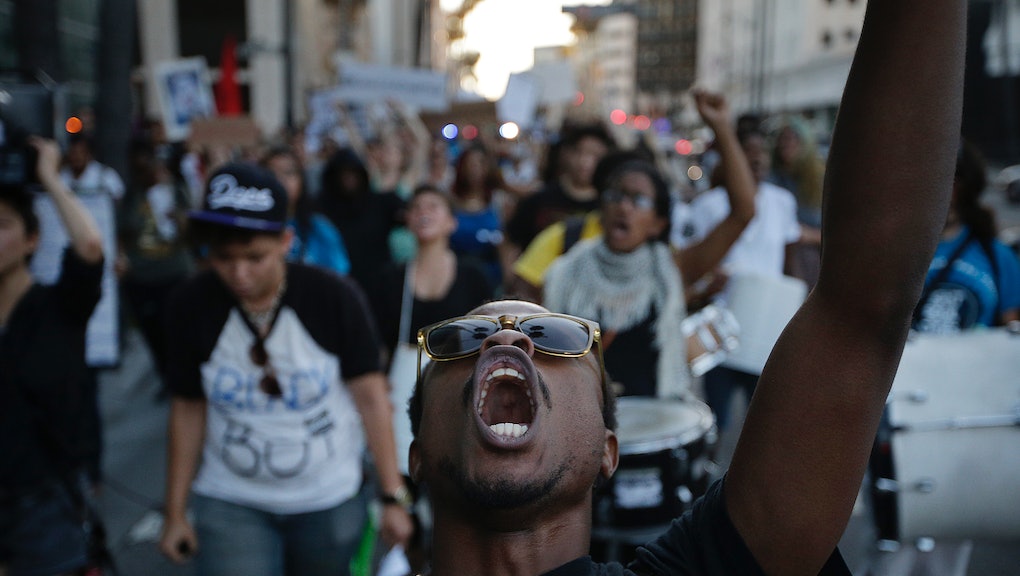 Welcome to America, Where It's a Crime to Be Black

Around 2:30 a.m. on the morning of Nov. 2, Renisha McBride, a black 19-year-old, was in a car accident near Dearborn Heights, Michigan. Her cell phone battery was dead so she went to a nearby home to ask for help. But instead of the help she sought, McBride was greeted with a fatal gunshot. Police found her body crumpled on the front porch.

A woman who saw McBride immediately after the car accident reported that McBride was bleeding, and disoriented; "she kept asking to go home." Investigators say the homeowner who shot McBride told them he feared for his life, and was worried that McBride was going to break into his home.

Renisha McBride’s murder is heartbreaking and eerily similar to that of other black Americans such as Jordan Davis, Trayvon Martin, Jonathan Ferrell. Though I am deeply saddened and angered by these murders, I am not surprised.

This is America. Here, taking black life is commonplace.

I could point to slavery, the Black Codes, the KKK, and police brutality. I could point to the well-armed white militias, who during the 1860s and 1870s violently overthrew democratically elected black politicians and stripped them of their rights as citizens — habeus corpus, the right to assemble, the right to free speech. I could point to the race riots, the massacres, and the burnings of entire black towns. I could name a few murdered black Americans: Amadou Diallo, Emmett Till, George Stinney, Sean Bell, Melvin Cox, and Rudolph Jackson. I could point to the lynchings, the assassinations of black leaders, the murders of political activists, the four little girls bombed while attending Sunday school in Birmingham.

Lest we frown on these examples and dismiss them as relics of long-dead racism, the murders of Renisha McBride, Johnathan Ferrell, Jordan Davis, and Trayvon Martin should remind us that killing black people in America is current and routine.

A Pew Research Center study found that black people continue to disproportionately make up 55% of homicide deaths in the United States. The Malcolm X Grass Roots Project reports that a black person is killed every 28 hours by state-sanctioned violence. The same report shows that in 2012 police and extrajudicial officers including security guards and armed vigilantes took the lives of 136 unarmed black people.

And black Americans do not just make up a disproportionate number of those murdered in America; we are also disproportionately locked behind bars. We continue to live under a multitude of racial codes both codified and not, such as Stop and Frisk and racial profiling, that are based on the assumption that black people should be under constant surveillance because they must be up to no good. This is the logic that informs the American prison industry, which has grown has 700% in the last 50 years.

Letters from prison written by Michael Dunn, a Florida man who shot 17-year-old Jordan Davis for listening to loud music, show just how many black Americans have been locked away. "You'd think Jacksonville is 90% black judging by the makeup of folks in jail here," he writes. And Davis' observations don't just apply to Jacksonville, Florida.

The great American tragedy is the obscene rhetoric of freedom and democracy when the numbers of black and brown lives slaughtered and chained on this soil tell a different history.

Marches and protests are cathartic, expressive, and necessary, but they are futile responses to a legal system propped up by mechanisms that sanction police and vigilante monitoring, containment, and even killing to keep black people in check.

We can argue about legal maneuvers, change our laws, train a new generation of lawyers, but the truth is nothing will change unless we challenge and rebuild the entire legal system. If we don’t, we will continue to scream and holler over the loss of more young life, and stare at our TVs in stunned silence at yet another "not guilty" verdict.

Unless we change the legal system, the sad and painful truth is there will be other Renisha McBrides, other Jordan Davises and other Trayvon Martins. As long as we continue to uphold and defend the American legal system,we will continue to live the American nightmare in which our children are next in line for another routine killing.