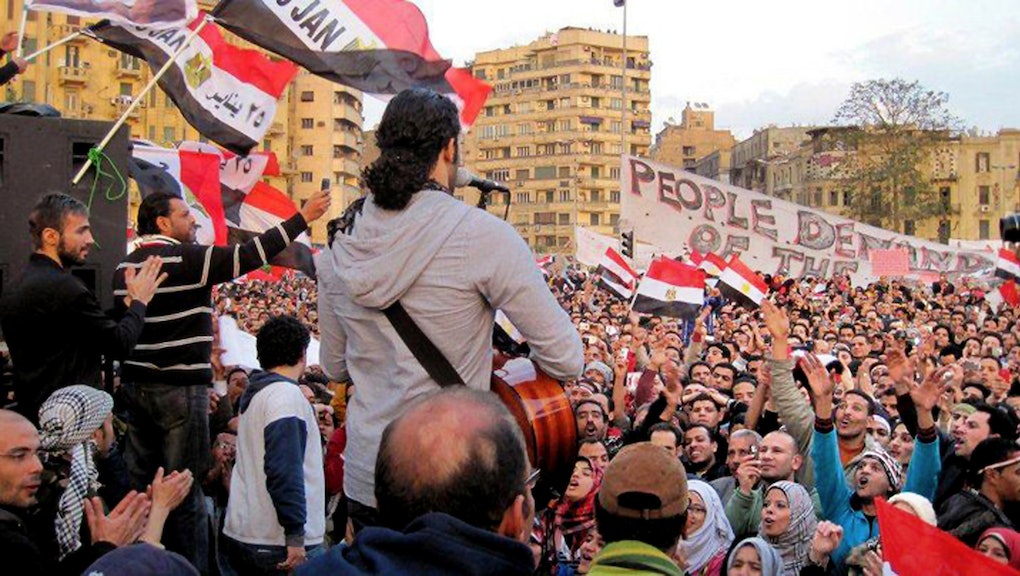 "The opposite of war isn't peace, it's creation."

That line from 90s rock opera, Rent, was on my mind as I watched Rebel Music, a powerful new six-part series that premieres November 18 on mtvU. The series examines the lives of young people around the world who are using art and music to ignite change in their home countries. From uprisings in Egypt to drug wars in Mexico, each episode of the series highlights a new group of fearless youth who are risking their lives today in the pursuit of a better tomorrow. In their own way, these millennials are standing up to oppression and destruction with the most powerful weapon they have: creativity.

We interviewed one of the masterminds and executive producers of this series, Nusrat Durrani, to get an inside scoop on the episodes ahead.

Missy Kurzweil (MK): How did the idea for Rebel Music start?

Nusrat Durrani (ND): The idea crystallized when we found a recurring theme in many of the countries that have been in the news in the past few years: a restless and dissatisfied youth that no longer wants to wait around for the establishment to address very important issues. They are taking matters into their own hands. The Arab Spring, the tidal wave of protests against sexual oppression in India, are all examples. We were intrigued by the lack of stories about young people in the mainstream discourse about the countries that are featured in this season of Rebel Music. We felt the show would provide amplification for youth in action.

MK: It's clear that young people are more globally aware than ever (as evidenced by websites like PolicyMic). How does that impact MTV and the development of your new show?

The core viewership for Rebel Music is millennials, particularly college students who are globally aware, curious about, and connected to their counterparts in other countries. Rebel Music leverages all the platforms that young people are active on. You can watch the show on TV, then take a deeper dive on rebelmusic.com and join the conversation through social media. All of the content is created for global access, so audiences in Egypt and Mali can access it as easily as those in the U.S.

MK: The international community has been influenced by American pop culture for decades, thanks to networks like MTV. Do you think America is ready for pop culture to go the other way?

ND: Yes. And that is the focus of MTV World, the division of Viacom that created Rebel Music — to bring the color, freshness, and excitement of pop culture from the rest of the world back to America.

We wanted to tell stories that brought out the humanity in countries in turmoil and take western audiences beyond the headlines.

MK: How do you go about finding the subjects for episodes of Rebel Music in each city? What did you look for?

ND: We wanted to tell stories that brought out the humanity in countries in turmoil and take western audiences beyond the headlines. We extensively researched each region we went to. We were looking for people who were up against significant odds or were making an impact. Each country presented different opportunities. Some of our subjects, like Ramy Essam in Egypt, had risked their lives for their rebellion. Ramy has been tortured for his protest songs during the first revolution. Other subjects, like 19-year-old filmmaker Sehar, were making an important symbolic statement. Sehar was learning how to ride a bicycle, for example, which is forbidden for girls in Afghanistan.

Social media is causing a profound change in the sound and visual vocabulary of pop music, and I predict the emergence of a new kind of pop culture and many global superstars from this milieu.

MK: What role is music playing in countries that are undergoing extreme change right now?

ND: Music plays a very significant role in every country we covered in the series. Egyptian youth have been galvanized by local hip hop, rock, and indie musicians. Bands like Arabian Knightz and Ramy Essam are right on the front lines of the struggle in Egypt, while in Mexico a group of musicians including the Nortec Collective and María y José, lifted Tijuana out of its devastation from the drug war. Musicians in Mali organized themselves against the ban on music imposed by the extremists that had overtaken the county in 2012.

MK: Rebel Music features episodes in Mali, Egypt, Israel/Palestine, India, Mexico and Afghanistan. Did you find any common themes strung throughout the music in these different places?

ND: Yes, music has the power to inspire, connect, heal, and strengthen. It is a tonic, a balm, a disinfectant, and an elixir. Music is the common language of the people of the world.

MK: What role has social media played in the rise and spread of their music?

ND: A crucial role. Social media is the most important reason there is such wild cross-pollination of music around the world. K-Pop is a great example; it is so popular in Latin America and Europe because of social media. We saw this in action in Egypt: musicians uploaded their songs (and a call to protest) in real-time and saw immediate results. Social media is causing a profound change in the sound and visual vocabulary of pop music, and I predict the emergence of a new kind of pop culture and many global superstars from this milieu.

The idea is to inform and inspire American audiences to look beyond the headlines, the noise, the negative poetry around some of the countries that are so often in the news, and hopefully view them in a more humane and positive light.

MK: Have there been instances in which the art of these "rebel musicians" has gotten them into trouble with their governments? Can you give an example?

ND: All the time. In our series, Soosan Firooz, the female rapper from Afghanistan is under constant threat from the Taliban for singing and appearing on TV. As is the heavy metal band, District Unknown. Ramy Essam has been jailed and tortured by the army in Egypt. The dangers these young people face are very real.

ND: The idea is to inform and inspire American audiences to look beyond the headlines, the noise, the negative poetry around some of the countries that are so often in the news, and hopefully view them in a more humane and positive light.

We also want the youth in these countries to be heard and understood. Afghanistan is not just the Taliban and Karzai. It is also Soosan, the beautiful rapper, and Sehar, the courageous young filmmaker. Israel and Palestine might be perpetually at odds but they also have Orphaned Land, the Israeli heavy metal band collaborating and touring with Khalas, their counterparts in Palestine. There is beauty and hope in the sea of chaos and darkness.

The first 2 episodes of "Rebel Music" air on November 18 at 9:00 PM EST, with 4 more episodes being released weekly, and will also be available on the website RebelMusic.com.