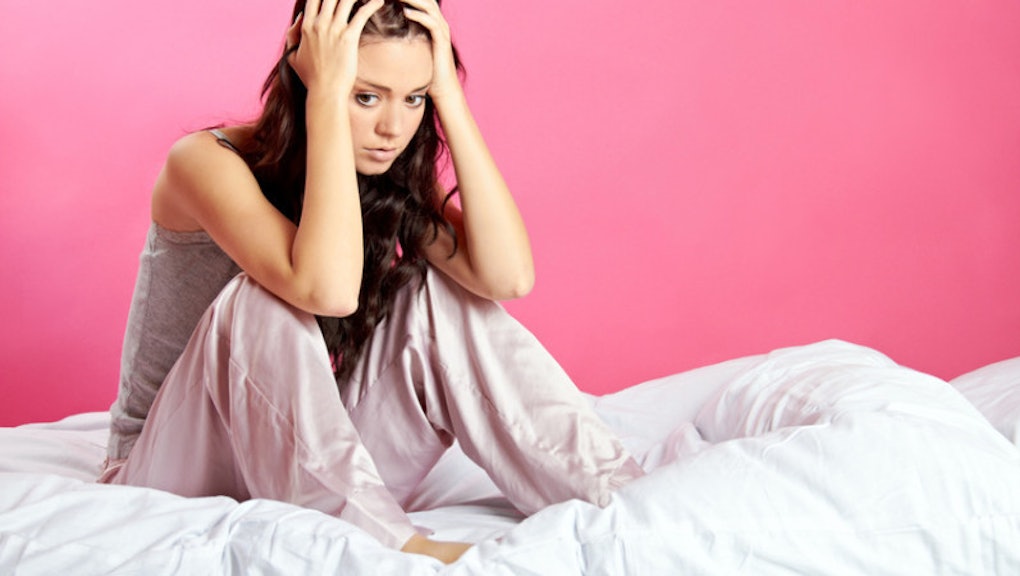 The Sexist Double Standard For Orgasms

I wonder how many women in the universe have both told this story and heard it in some form from one of their girlfriends: "I met this guy at a bar last night. He was hot and also loved that weird Swedish electro band I love! But then we hooked up and he didn't seem to give a shit whether or not I came. He fell asleep as soon as he finished, and there I was, horny and sad." I've been hearing this in some iteration since high school, when it was sadly routine for girls to give half-hearted handjobs at house parties while literally never entertaining the thought of their own orgasm.

Well, according to a recent national study, we now have proof for what everyone who has ever been single already knows: Women get off less during casual sex.

The New York Times recently reported on the results of this study, which show that women are twice as likely to reach orgasm from intercourse or oral sex in serious relationships than in hookups. Forty percent of the college-aged women surveyed had an orgasm during their last hookup, versus 80% of men. In contrast, 75% of women in relationships had an orgasm during their last sexual encounter.

There are a variety of reasons for this trend: Practice with a partner yields better success, we are not all at the height of our sexual prowess after four whiskey sours, people care less about pleasing someone they don't have emotional ties to. (I do want to note that the study only dealt with heterosexual sex; I have a feeling the numbers would be different for queer women.)

What the New York Times neglected to mention is that the so-called "orgasm gap" is not just an issue of single vs. coupled — it's an issue of men vs. women, and how we percieve their sexuality.

Even though women are becoming equal partners in the so-called "hookup culture," women are still judged very differently for being openly sexual. We all know the story: he's a player, she's a whore. Promiscuous women are often slut-shamed by both men and other women.

Take, for instance, the uproar over Rihanna's recent "Pour it Up" video, which features a great deal of pole dancing .

The singer was attacked for being "obscene" and "pornographic" by fans and media outlets alike. Rihanna's male hip-hop contemporaries rarely, if ever, receive the same kind of backlash for rapping about strippers, showcasing naked women in their videos, or demanding sexual pleasure.

These kinds of double standards lead many women to believe that they aren't entitled to sexual fulfillment. When our culture teaches that sex is something women give and men get, negotiating female pleasure is dangerous business. Most men expect to have an orgasm when they have sex, while the majority of women see having an orgasm as an awesome plus when they have a casual encounter.

This isn't to say that sex must end in an orgasm to be enjoyable, but that the male orgasm is often construed as a necessary component to sex while the female is not. Part of the reasoning for this is the cultural narrative around the female orgasm: "Women's bodies are so difficult! The clitoris is hard to find! But maybe it doesn't matter because women don't really care about orgasms, right? They just want to cuddle."

Communicating about sex with anyone, let alone someone you just met, is already difficult. For women, asking for what you want in bed is even harder when you haven't been taught how to do it. Sex education, even the "comprehensive" variety, is largely about mechanics, not communication, a necessary component for good sex. Vanessa Martini, 23, told the Times that most cultural representations of sex leave out the messy details.

Let's be clear: straight men aren't all jerks who are terrible in bed. Lots of men want to please their partners, long-term or otherwise, and approach sex with respect and care. That's all great, but men, you don't deserve a medal for going down on a woman.

The Times piece sets up a dichotomy for young women: We can either sacrifice a reliable orgasm for the fun and spontaneity of casual hookups, or we can take on the burden of monogamy for consistently gratifying sex.

Well, I call bullshit. I say we can have everything we want. But first, we need to seriously re-think and re-create gendered frameworks, and start centering female pleasure in our cultural conceptions of sex.