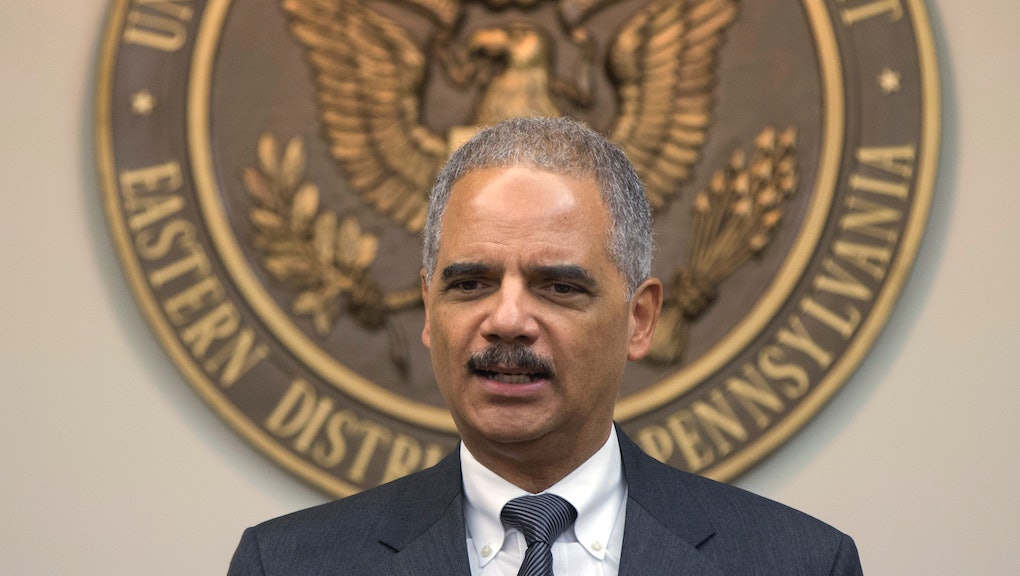 Thursday morning, a small group of Congressional Republicans submitted articles of impeachment against Eric Holder, citing a combination of new and longstanding charges against the attorney general, from Fast and Furious to DOMA. Although Holder has always been anathema to Republicans, the impeachment resolution centers less on his personal conduct than on a variety of controversial Obama administration policies. These policies, from selective enforcement to executive privilege, deserve a thoughtful, deliberative conversation, an airing of views, and a clear resolution — or, in other words, exactly what Republicans just made completely impossible.

- That he violated federal law by refusing to submit to a Congressional subpoena demanding Justice Department documents pertaining to the Fast and Furious investigation.

- That he has failed to properly enforce a variety of federal laws, including DOMA and the Controlled Substance Act.

- That he failed to prosecute any IRS employee following revelations that the agency improperly targeted conservatives.

- That he misled Congress over his role in the investigation and wiretapping of Fox News reporter James Rosen.

Some of these charges deserve more attention. In the Fast and Furious investigation, the Obama administration claimed executive privilege when a House subcommittee issued a subpoena for Justice Department documents. Although Republicans by then did not believe that administration officials had done anything wrong during the operation per se, they were still on the lookout for evidence of a possible cover up. When Holder refused to play ball, he was swamped with a contempt of Congress charge. As for the tussle between executive privilege and the Congressional subpoena, that’s also before the courts, where a U.S. District Court judge recently gave signs of hearing the case soon.

There is also substance to the second charge. The Obama administration’s policy of selective enforcement on issues ranging from immigration to drug policy has rankled critics, many of whom see it as tantamount to Obama deciding wholesale which laws to enforce and which to ignore. In the words of one Republican lawmaker, “How would my Democratic friends feel if Mitt Romney had been elected, and his first day in office he decided that he was going to pick and choose which parts of Obamacare he was going to enforce?" However, what to some lawmakers might seem to be selective enforcement, others see as good old-fashioned prosecutorial discretion, the kind of leeway government always has when deciding how to enforce the law and where to invest its limited resources. Still, from striking mandatory minimums to proposing new EPA standards, the Obama administration's go-it-alone strategy in the face of an uncooperative Congress continues to push the envelope.

In the Rosen case, Holder has faced no consequences for signing off on a dubious Justice Department strategy to hack a reporter’s personal email account. Although the administration defends itself by claiming it never intended to prosecute Rosen (the leaker, Stephen Jin-Woo Kim, was indicted in August 2010), it still justified a search warrant against Rosen by citing the potential of prosecution. Without the threat of prosecution, the administration would have been forced into issuing a subpoena, which would have required notifying Rosen of the investigation and allowing him the opportunity to protest the subpoena in court. By threatening prosecution, Holder signed off on the deliberate misuse of the judicial system — and that’s if you buy the story that they never intended to prosecute Rosen in the first place.

Regardless of whether or not Holder deserves to be impeached, some of this stuff deserves to be talked about and adjudicated, though of course it won’t be. Our partisan political system de facto undercuts the many legitimate criticisms which can be leveled against the Obama administration. In the current environment, mistakes are mistakes, but mainly Republican talking points. In the misguided impeachment resolution, the true disappointment is not merely Holder and all his misdeeds, but a Republican opposition which has managed to make even legitimate criticism a purely partisan game.