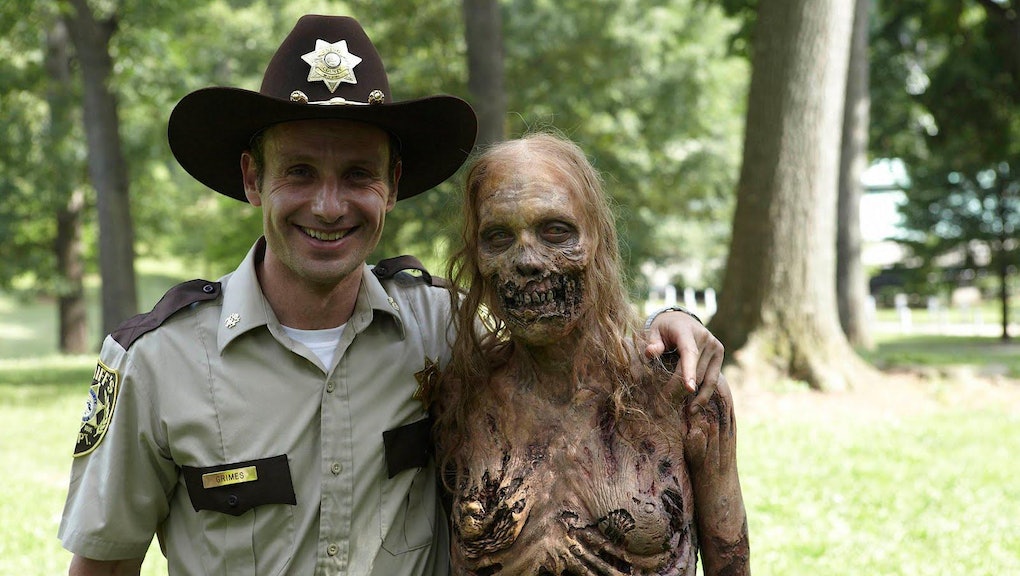 Read the Secret Diaries Of Your Favorite 'Walking Dead' Characters

As exciting as a zombie apocalypse is, there is definitely some downtime involved in the collapse of society as we know it. And what better way to spend that free time than to journal!

We found excerpts from the diaries of seven of the characters from AMC's The Walking Dead. If these people represent humanity's last hope, things aren't looking so good. (Warning: spoilers — and a lot of feeeeelings — ahead).

1. The Diary of Rick Grimes

I want to focus on my kids and building a life here. After all, there's more to do in this world than shoot people in the head. For instance, I recently discovered I've got quite the green thumb, so I've been growing crops for the group here! It feels good to do something with my hands that doesn't involve re-murdering the resurrected or chopping off someone's leg.

In truth, it hasn't been all Better Homes & Gardens. A fever has broken out at the prison. Oh, and meek, sweet old Carol murdered two people in an attempt to eliminate the viral threat, so I had to ask her to leave our group. I still haven't told Darryl. It might seem like I'm avoiding the issue, but I'm not. I just need to teach Carl about farming at this moment.

I just would love someone else's opinion on my peas. I really think they're something else.

2. The Diary of Carl Grimes

Dad is SO annoying. All I want is to get my gun back so I can kill walkers and he just won't shut UP about gardening. It's like he doesn't even have balls anymore. I guess Mom always had a pretty tight hold on them, but if he tells me one more time how great his tomatoes are, I swear to GOD I'm gonna impale myself against that stupid fence like this:

I've been feeling so angry and angsty lately. Going through puberty is never easy, but doing it in a zombie apocalypse without a mom and with a dad that's suffering from hallucinatory episodes and a mid-life crisis just takes it to a whole new level. A REALLY SUCKY LEVEL. I just wanna say to Dad, hey, man, you can't wander vaguely around the woods doing "stuff and things" and ignoring me and Judith.

Plus I have all these questions. Like, how come every morning for the past month I've woken up with this weird hard feeling in my pants? And how come that feeling comes back now whenever I talk to Maggie or Michonne or Beth? And why does it feel good to lay face-down on my prison cell floor and just kind of wriggle? Normally, I wouldn't ask Dad this kind of stuff, but I can't Google things anymore. I need a father, not a farmer. Or Google.

Thanks for listening, Diary. I better go — Dad's calling me. He says I have to try his peas. Ugh. After I eat his stupid peas I'm going to rub the front of my pants against something warm. That always feels nice.

Confused and feeling many things,

3. The Diary of Lori Grimes

I didn't think things could get any worse in an apocalypse but it turns out they can: I'm pregnant. And I'm not sure who the father is. I remember there used to be terrible daytime television like this: "I'm pregnant and I don't who the baby daddy is." I used to laugh at those people. They were fat and stupid. Now I feel like one of them (except I'm not fat). Sure — most of our friends and families are ravenous, reanimated corpses, but you really know it's the end of the world when you become a bad episode of Jerry Springer.

The baby's father could be my husband, Rick, but it could also be his best friend/frenemy, Shane. I'm trying not to beat myself up for sleeping with Shane — the world as we knew it was over, and I thought Rick was dead. Also, Shane is really hot.

I can't imagine this getting worse, but it probably will — what if Shane goes crazy, and Rick has to kill him, and then Carl has to put walker-Shane down, and then Rick resents me and our marriages crumbles, and then I die in childbirth and Carl has to put me down? I know, I know — I'm being dramatic. I need to stay positive and be grateful. After all, I have more than most: my husband, my child, my mister, a working cerebral cortex ...

I should sign off though. I have no idea where Carl is — if I'm being honest, I never really do. I guess a good thing about being pregnant is I'll always know where at least one kid is. Until I poop this one out and it starts to resent me, too.

4. The Diary of The Governor

Everyone is being so mean to me. They all look at me like I'm some kind of one-eyed monster. I think it's just because I kept a secret collection of severed heads in my house and murdered my Woodbury army, and, yeah, have one eyeball now. Like that's my fault. Fucking Michonne. She kills my zombie child right in front of me, jams a shard of glass through my eye, and makes a mess of my rec room. Who's going to clean that up?

I don't know why I'm even surprised — Michonne was always bad news, and those goddamn Woodburians never appreciated the security I provided. Honestly, Diary, sometimes it's like you're the only one who gets me. And I know I act tough, but it really hurts. Not my feelings — I don't have those — but my eye. It really, really hurts.

Fucking Michonne. But I can't dwell in the past. I need to look forward. Below is a list of goals for this week:

— kill everyone at the prison

— find a glass eye (preferably blue, since that's the color of my good one, but I'm not going to be picky)

I know it's ambitious, but it's important to articulate my objectives. Plus, you keep me honest, Diary. I can't hide anything from you.

Well, I'd better get cracking on this list. Wish me luck!

5. The Diary of Daryl Dixon

Ain't got no time to write in you. I'm BUSY. I been crossbowin', goin' on runs, broin' out with Rick, an' just bein' a badass. Like I said: ain't got no time.

P.S. Do you think Carol is into me?

6. The Diary of Carol

You can't tell anyone, but I've got a MAJOR crush on Daryl! I get so nervous around him and his big crossbow, I can barely talk. Do you think he ever thinks about me? When I think about him, this is what it looks like in my head:

Can I tell you another secret, Diary? I haven't had sex in over a year! Oh my goodness, I can't believe I just told you that! No one knows me like you do, Diary.

P.S. Maybe I should grow my hair out. What do you think?

I'm so frustrated — I have no idea what I'm doing here and I feel like no one really cares about me. And I don't know WHY these people keep calling me "T-Dog!" I've told them a million times my name is THEODORE. How are we going to create a new, better world if you insist on calling the only black guy "T-Dog?"

This is some bullshit.