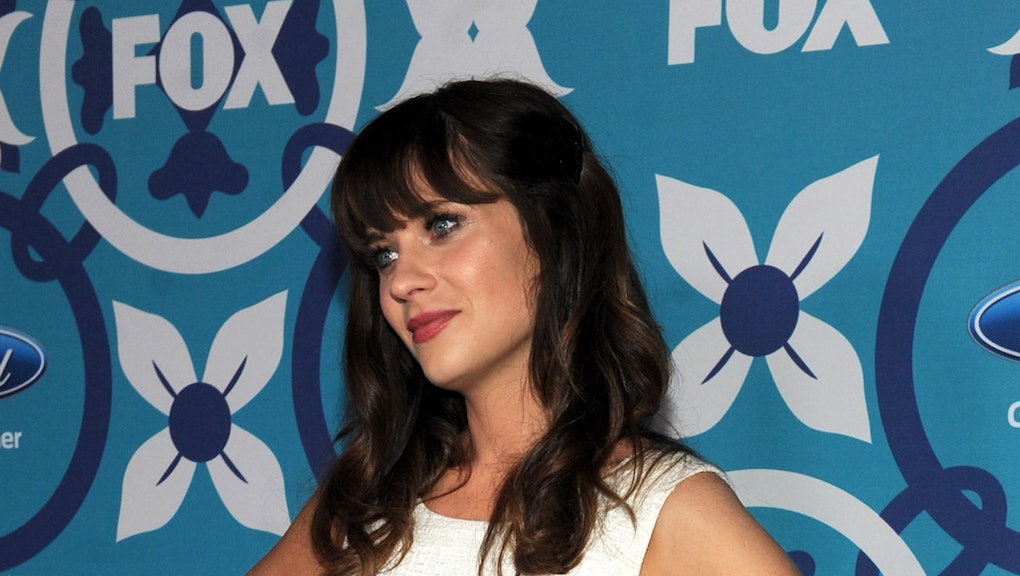 Zooey Deschanel gets a lot of hate for being a walking giggle, but in a way she saved us. "From what?" you ask. From the dreaded myth of the manic pixie dream girl.

MPDGs still exist, of course. They doodle pensively over glasses of warm milk at cafes. They lurk in store aisles, trying to pick the right shade of Manic Panic. They sit cross-legged at restaurants. They sit down in supermarket aisles. They wear ripped tights and avoid complete sentences. But Zooey and her New Girl character, Jess, have offered up an alternative to the alternative, and it's a really good step forward for young women.

Maybe the only person who was inspired by snooze film Elizabethtown, critic Nathan Rabin coined the term in response to the film in 2005. Rabin constitutes the MPDG as, "that bubbly, shallow cinematic creature that exists solely in the fevered imaginations of sensitive writer-directors to teach broodingly soulful young men to embrace life and its infinite mysteries and adventures." She was a blow to feminism.

The MPDG is certainly not the most offensive cinematic archetype, and, overall, it's contributed to some great movies since its inception (of which ironically Elizabethtown was the worst, The Virgin Suicides the best, with Garden State and Crazy Beautiful as solid contenders). The MPDG seems innocuous enough on the silver screen, but the idea takes on a sinister life of it's own when young women try to emulate these Orlando Bloom-catching creatures.

You may wonder who would want to be a manipulative, damaged, film waif, but young women have been seeking that identity since far before Elizabethtown. It only takes a peak at a French New Wave film to know that it's a sacred duty for men to fall for depressed, malnourished, quip-y types. That was fine for the 60s, but when that idea was translated into the new millennium, it began to convey that a women couldn't be simultaneously strong and interesting, or that tragedy somehow befell beauty.

But alas, the internet sneezed, and adorkable Zooey Deschanel came into existence. I'll admit, I certainly wasn't a fan initially (except she killed it in Elf and Almost Famous), and I was even less of a fan once the whole wannabe-June-Carter-thing happened when she teamed up with M. Ward for She and Him. 500 Days of Summer cemented her as an indie babe though, so her mediocre American bandstand act was here to stay, along with all of the terribly bland NPR interviews that came with it.

When New Girl came out, I was constantly ready for a Deschanel-eyeroll. For this, I was wrong. I had assumed, like many others, that her shtick was just that — a shtick. She came on strong with the twee-fueled, asexual, "I'm unique because I'm awkward" routine, which could have been even worse than the MPDG. Girls were already feigning damage — they didn't need to add dumb to that list of qualities to emulate.

But the character of Jess is anything but a crutch. She is twee, and awkward, but she also is smart and independent. Most importantly though, there is a self-awareness to Deschanel's character that the MPDG is far too vapid to possess. Jess gets laid, dumped, fired, and hired, all while knowing that she does touch glitter and sing frequently — that is just who she is. Part of this is due in great part to creator Elizabeth Merriweither, who has admitted the character is semi-based on her own life. Merriwether is an acclaimed funny woman (Children's Hospital, No Strings Attached), and it is obvious that her talent has meshed brilliantly with Deschanel's quirk to create a character that's not just an internet meme (most of the time).

Ultimately, the character of Jess, the show New Girl, and Deschanel as an actress don't have to be anything or suit anyone's ideals. But all three are working together to do something new that does — as one of America's most watched sitcoms — have an impact on culture and who young girls think they want to be when they grow up. The main pitfall of the MPDG was that it is a way of being centered on caring a ton. Jess, on the other hand, is less overwrought, and that's a lesson that every teenage girl should learn as early as possible.

So cheers Zooey, you geek-girled us out of the dark early aughts and ushered us in to an age of glasses and beaded faux collars.