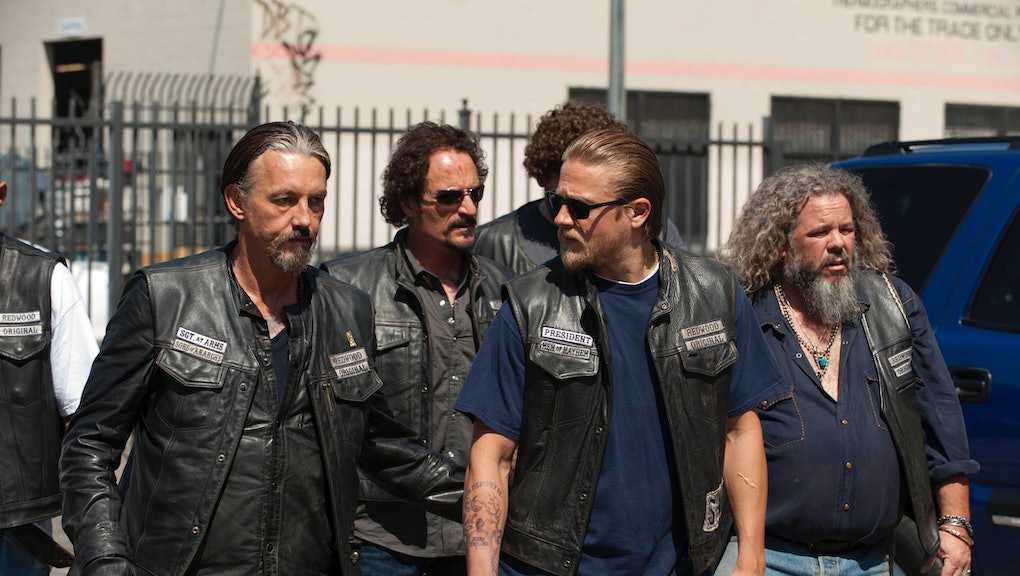 'Sons of Anarchy' Proves What Every Black American Knows About Television

If it's 11 p.m., you can guarantee that I'm in sweats, watching an episode of FX's Sons of Anarchy (SOA).

I was once spontaneous and single, but the comfort of a long-term relationship and a great show have made my nights pretty predictable. FX has me hooked.

The show gets its name from its protagonists, a white motorcycle gang. Hip viewers (such as myself) call the gang "The Sons," "The MC," or "The Club." The Sons inhabit the fictional town of Charming, whose penal system seems utterly ineffective. The gang often takes matters into its own hands, exercising vigilantism to ensure order in their beloved town. The show is characterized by a certain Western-esque excitement and danger, filled with chase scenes and retribution via torture or murder. The show's Season 6 premiere in September ranked at an all-time high as the most watched single episode in FX's history, with 5.87 million viewers. It was also cable's most watched show of the night, ranking highest in the age 18-34 category: millennial viewers.

The real millennial world is disheartening. We are clouded by debt, never-ending job searches, and a lack of trust in our political system.

So it's no wonder we escape this reality through a thrilling show like SOA. The story, though, marked by anxiety and violence, is successful only because we identify with the Sons. If the show focused on a non-white gang, it would be a flop.

The Sons cut off their enemies' genitalia, hastily attempt the murder of a fellow Son, kill federal agents, and are involved in numerous shoot-outs. Even The Sons' "old ladies" have violent streaks.

Nonetheless, we sympathize with them. We are swept away by the Sons. Jax charms us. We respect Clay. We are sensitive to Opie's trauma. We adore Juice's humor and appreciate Prospect's naïveté.

It's likely easier for viewers to palette their gruesome behavior because The Sons are white.

The white Sons claim that they commit crimes "for the good of Charming," and, "the good of the Club," and we buy it. We feel safe with them because we see them as hardened, yet virtuous men protecting their community. A black or Latino gang would likely be frightening to many of the viewers comfortable with The Sons.

There is little mention of white gangs in the real world. It's a cultural stereotype that violent groups are composed mostly of black or Latino men. It is because of this that we can watch SOA comfortably; We see the show as a far-fetched portrayal of compassionate white men pushed to their limits. If the same show featured black protagonists, it wouldn't have been cable's most-watched show. Rather than seeing The Sons as violent-but-virtuous, we'd classify them as thugs. We'd see them as inherently violent, unlike The Sons, who are inherently good, but pushed into situations that force them to violence.

Millennials escape through a gripping show like SOA, and we are entitled to some escapism. But we should take a moment to consider the success of this show and others like it. Would white millennials watch if the killers weren't also white?