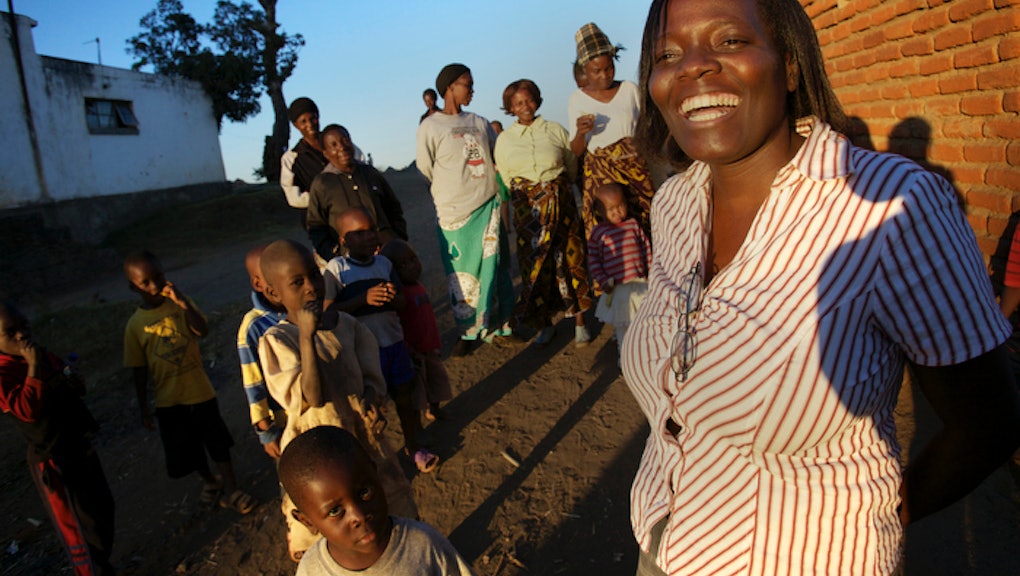 Meet Joyce Kamwana from Lilongwe, Malawi. She is living with HIV.

Prior to her diagnosis in 1988, her life was going great. She had a good job in a management position at Malawi's central bank and a happy family with a husband and two daughters. Then, she was diagnosed as HIV positive.

Because of the stigma associated with HIV in Malawi, she was fired from her job.

"I came out in the open and said, 'I am HIV positive,'" said Kamwana. "They fired me because they thought I was going to die."

That was just the beginning, though, of the harsh realities she would face as a woman living with HIV in Malawi in the 1980s. Suddenly, her family was unable to afford the basic necessities, not to mention the monthly $200 required for treatment. In 1988, Malawi's GDP per capita was just $219 — and that was if you had a job. She had no choice but to forgo treatment.

"For 15 years I went without medication, because the medication that was available was way too expensive for me," she said.

Kamwana went through everything a person could go through during those 15 years. She lost her job, was chased out of her home and contracted tuberculosis, the leading killer of HIV/AIDS patients worldwide, twice. In 1991, her husband was diagnosed with AIDS, and died shortly after.

"People were saying, 'She will die tomorrow,'" Kamwana said. "'She's not going to be able to see her children grow.'"

Then, in 2003, her life changed. That year, Malawi became a beneficiary of the Global Fund, an international financing institution raising funds to fight AIDS, Tuberculosis, and Malaria. The fund enjoys broad bipartisan support in Congress and it is estimated to save more than 100,000 lives a month.

"If it weren't for the Global Fund, I wouldn't be alive today," Kamwana said. "When the Global Fund came to Malawi, I was one of the lucky people put on free medication so I could control my HIV. I went from bed to being able to work and provide for my family."

As the government of Malawi partnered with the Global Fund the lives of people like Kamwana improved dramatically, and on Dec. 3, world leaders will have the opportunity to ensure the organization stays funded.

Leaders from around the world will gather in Washington, D.C. for the annual Global Fund Replenishment Conference at which time President Obama should commit to fully investing $5 billion over the next three years to the Global Fund, and he should be encouraging other donor countries to max out their pledges, as well.

The Global Fund has been able to provide treatment for over 400,000 HIV/ AIDS patients in Malawi alone, and an estimated 5.3 million in sub-Saharan Africa. Not only does this keep people like Joyce alive, but research has shown that treatment of HIV/AIDS is one of the best ways to prevent the spread of the disease.

In 2011, researchers proved conclusively that treating HIV positive people with antiretroviral therapy dramatically reduces the risk that they can transmit the virus. The study demonstrated that when treatment is initiated early on, there is a 96% reduction in the risk of transmission.

With treatment as prevention, experts now believe we can end HIV/AIDS as we know it. And, they think we can do it in this generation.

Today, Kamwana is a leader in her community on HIV/AIDS issues, helping people to cope with the disease and educating them about the virus. She has, in fact, been able to see her children grow, and is a grandmother.

"When I learned about my HIV status, I was 25. If it wasn't for the Global Fund, I wouldn't have reached my 50th birthday," she said.

President Obama must be a champion for people like Kamwana worldwide.

As Dr. Mark Dybul, Executive Director of the Global Fund, said when launching the replenishment effort, "We have a choice: We can invest now, or pay forever."