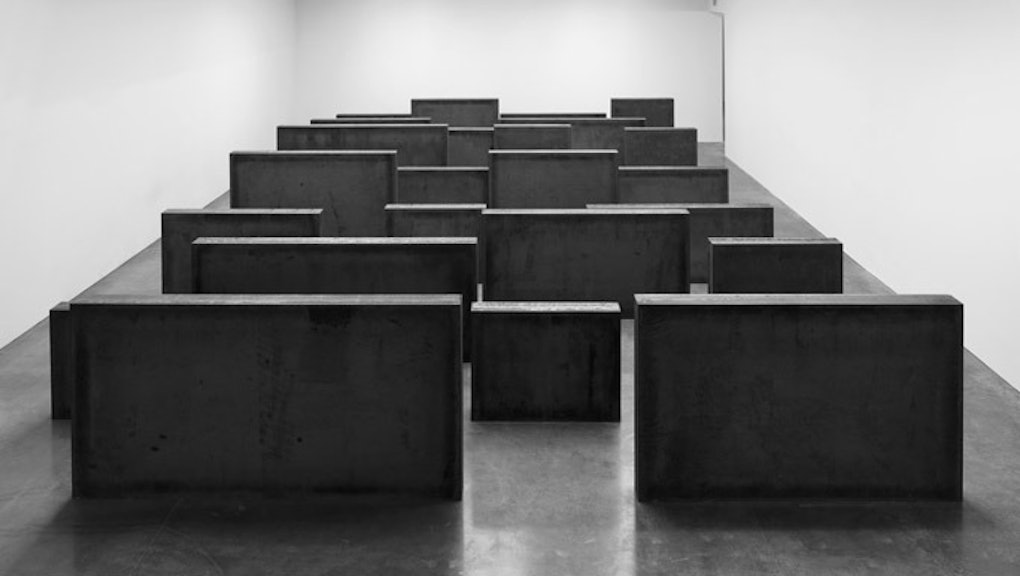 This Sculptor is Proving That Mind-Blowing Art Doesn't Fit Online

Richard Serra's new exhibition at Gagosian Gallery in New York has been called a "departure" from form, though he's still dealing in the materials — immense, rusted sheets of steel — for which he's recognized, it seems, universally.

The 74-year-old American artist's installations scatter the globe, from a Kubrickian monolith on a remote hilltop in Germany (Bramme), to a forbidding steel teepee in central London (Fulcrum), to a sleek black wall slicing through green countryside in the Netherlands (Sealevel). More often than not massive, and in many cases permanent, Serra's works seem less like contained art installations than intrinsic elements of the landscapes in their own right, possessing a sacredness — even an ancientness — not unlike the stone formations at Stonehenge or the mysterious statues of Easter Island.

The thrill of Serra's sculptures, though, doesn't derive from their size or the international locations in which he sets them. Rather, it's the experience of walking in and around them, massive as they are, that makes his work so impressive, and — at a time when the clickable, swipeable, shareable flat image rules — rare.

We digital-age creatures — and we millennials in particular — are capable of being awed by very little. Even art, pinioned as it is to the same pixelized universe in which we order Seamless, watch porn, and conduct 90% of our social lives, has lost its power to blow our minds. Wedged into the same traffic pattern as memes, .gifs, and #tbt, the image of Francis Bacon's triptych Three Studies of Lucien Freud has little more aesthetic value, and far less cultural currency, than a photo of a cat wearing tights. The investor group that paid $142.4 million for that triptych on Tuesday, breaking the record for the biggest single-work art auction sale of all time, obviously wasn't looking at it on an iPhone.

It's in this context that work like Serra's becomes increasingly important, and merits the attention of millennial artists and creators of all types. Serra's exhibition at Gagosian — which, if you're in New York, is a must-see — is similar to his earlier work in its focus on spatial warping, but the method and feel of that warping has evolved. Traditionally, his large-scale installations have taken the form of smooth, swooping ribbons of steel that viewers can walk through, as though through a kind of graceful, easy maze. This is the case at the Los Angeles County Museum of Art, where his famous piece Band creates an alternating series of curved, fortress-like walls and warm enclosures. Entering and emerging from the hollow chambers feels a bit like hop-scotching back and forth between the right and left sides of the brain, or — for the Freudians in the crowd — between the Mother and the Father. Standing within them, one feels warm, safe, cared for; standing outside, one feels anxious, isolated, alarmed.

With the exception of one work that feels vintage Serra (Inside Out), the sculptures in the new Gagosian exhibition do away with curvature, adopting instead a more angular, mathematical idiom. 7 Plates 6 Angles is a series of connected gigantic wedge-like arrangements; Grief and Reason (for Walter), two stacks of sarcophagus-like blocks. Intervals, the most imposing of the group, looks something like a minimalist cemetery, with row upon row of unevenly sized slabs standing at militant attention.

Though the character of the sculpture has changed, its basic intent — to distort our sensory experience of space — has not. One can even read 7 Plates 6 Angles, and its juxtaposition of two opposing emotional experiences of space, as a trigonometric remix of Band. Serra told the Wall Street Journal: "People are never asked to walk into corners … but I thought I'd ask because it gives such a feeling of compression and release."

Serra's attention (sculpturally, at least) has always been trained on, and remains trained on, a specific mode of encountering art: namely, the phenomenological experience of space, the feeling we get — somatic, emotional, intellectual — of walking in and around, behind and underneath, strange and sometimes overpoweringly massive structures. It's this focus on phenomenology instead of visuality, on space instead of image and body instead of the eyes, that makes him so unique and — despite his longevity, success, and his membership in the Old Guard — highly contemporary.

The task for artists now is to carve out spaces and contexts for the kinds of experiences with which we have — in transferring all of our intellectual and spiritual energy to the virtual, image-based world of the Web — lost contact.

It is not news, of course, that we're experiencing something of a crisis of image saturation. The digital age is the image age. Our social lives and our commercial transactions, the tools with which we manufacture coherent identities and construct narratives of our lives — because only fungible as Web objects — are converted into images, or otherwise exist as bits of text or video situated within a predominantly image-based whole.

In such a time, artists must reveal to us our gluts and deficiencies. Every artistic period is tasked with unearthing or revitalizing certain aspects of the human experience. It fell to the Impressionists to invent a visual language of subjectivity and contingency, to the earliest practitioners of abstraction to liberate expression from the strictures of mimesis. The task for artists now is to carve out spaces and contexts for the kinds of experiences with which we have — in transferring all of our intellectual and spiritual energy to the virtual, image-based world of the Web — lost contact.

I'm talking specifically about the touch; smell and taste, too; any sort of phenomenological experience, really, that can't be had online. This is precisely the work Richard Serra has done for decades and continues to do; and it's the work that millennial artists should do, too.

My purpose here is not to lambast the Web or Internet culture as inferior to "real life," or low-brow, or somehow lacking in vitality. It is simply to point out that digital life, for all its riches, is limited in the phenomenological experiences it can provide. If millennial artists are to make art that seduces us and rearranges our consciousness, they'll do so by taking note of this gaping lack in our lives and supplanting it with aesthetic experiences that reinvigorate our sense of physical presence and spatial reality. If images ever had the power to do this, they don't anymore. The kingdom of pictures is simply too crowded for anything truly stupefying to come from it. What we need are mediums outside the image plane: sculpture, performance art, staged events, dance, architecture, landscape — modes by which to reclaim the experience of space.