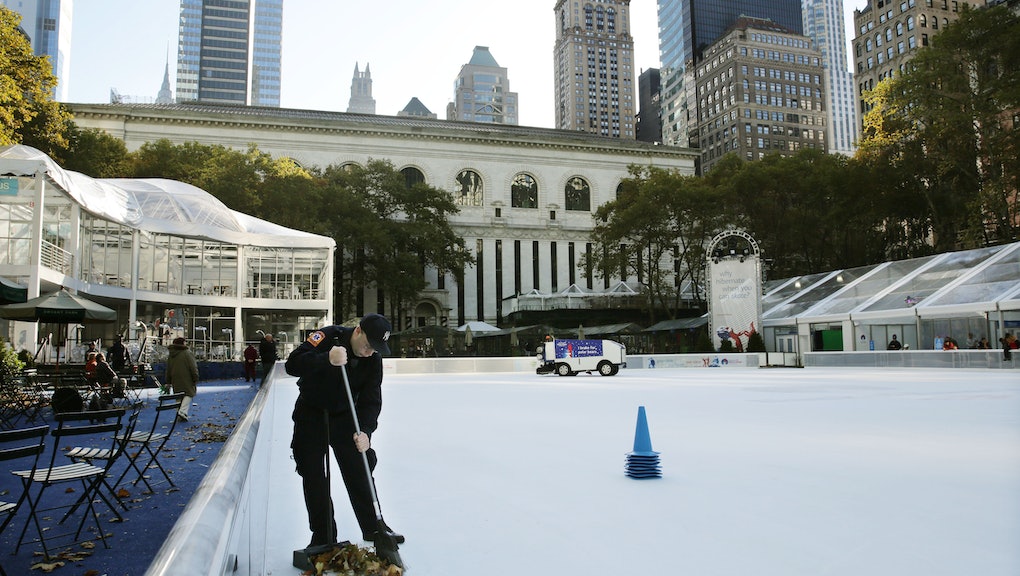 Why Would a Teenager Shoot Up Bryant Park Over a Jacket?

The Marmot Mammoth is a $700 winter parka that retails at a single store — Paragon Sports near Union Square — and is considered a status symbol on New York’s streets. Corey Dunton, the gunman responsible for the Nov. 9 shooting in Bryant Park, wanted the coat, nicknamed "Biggie" because of its unusually large fit, for himself. "Give me your jacket," he told Javier Contreras, who was wearing one while skating. Contreras refused, to which Dunton responded by firing eight shots from his .22 pistol. Contreras was hit, an uninvolved 14-year old, Adonis Mera, was instantly paralyzed, and chaos ensued. Dunton was later arrested.

It’s difficult to understand how envy over one luxury item could lead to this type of crime. At a loss to unpack the shooting, I tried to imagine what conservative and liberal ideology had to say about it. Neither viewpoint is very satisfactory.

"Give me your jacket." The demand is eerily reminiscent of the words that preceded this New York City’s most famous instance of vigilantism. In 1984, Bernhard Goetz boarded a subway train and took a seat next to a "boisterous gang" of four black youths. Goetz was unaware that they were on their way to rob an arcade; all he knew was that he had with him .38 revolver. He had carried the gun ever since he was injured during a mugging three years prior — One of the thousands of street crimes that typified that particularly brutal period of lawlessness in New York. After Goetz sat down, the men moved into a position to block him from exiting the train. One said, "Give me five dollars." After repeating his words, Goetz stood up and fired five shots at the four young men.

The reaction to the incident was mixed. Some New Yorkers shared Goetz's frustration; others thought this was a heinous act of racial profiling. This incident suggests that despite what the naive may think, when hoodlums demands something of yours, the situation is exactly what it seems.

Today’s New York has gone soft on this issue, no doubt due to the steep decrease in crime that has resulted from policies that liberals, including the city’s new mayor, would like to end.

For all the remonstrations over stop-and-frisk, the Bryant Park tragedy is a rejoinder for those who claim that racial profiling is the creation of a racist police force’s imagination. Corey Dunton was most likely not in the racial majority that night. Had "profiling" police officers become suspicious and searched him for a weapon, they would have found one and this incident could have been prevented.

Of course, if Javier Contreras or another bystander had been able to react to Dunton as Goetz had upon realizing a real threat, the shooting could also have been thwarted. One witness recounted, "He started walking real quick toward the ice…I saw him holding a gun in his waistband—and then I ran the other way." Imagine if he hadn’t had to.

New York City’s restrictive gun laws and hesitation to embrace stop-and-frisk tensured that Dunton was the only civilian with a firearm that night. What we saw will become more common, not less, unless these realities are confronted.

Some would have you believe that the antidote to the chaos of eight bullets being fired in a crowded area would be a torrent of confused crossfire coming from agitated, but armed, citizens. Those people are wrong. The tragedy that would have ensued such a scene would have made a body count of two look miniscule. As for stop-and-frisk as prevention in this case, there’s a 3% chance that police would have stopped Corey Dunton. That’s the rate at which the practice leads to convictions, at the price of a rampantly racist balkanizing of the city.

Furthermore, this story seems to have attracted attention solely because it occurred in a central part of the city. Shootings committed in Hamilton Heights, the South Bronx, Bed-Stuy, or any of the other low-income areas ravaged by gun crime hardly receive this much coverage; it’s no surprise that leaders from those areas lobby so strongly for policies that would make guns harder to obtain. No one seems interested in how Dunton got his gun. The media’s only takeaway has been that a hoodrat didn’t stay put.

Possibly the best illustration of the type of attention this shooting received emerges in comparison to two other recent instances of Biggie-jacket violence. Manhattan’s first homicide of 2013 occurred when 16-year old Raphael Ward was killed on the Lower East Side by kids looking to steal his recently-purchased Biggie. Two years ago, a Bronx teen was fatally struck by two cars after fleeing a Biggie-jacket robbery attempt.

These violent robberies are far from uncommon. Marmot and Paragon both acknowledged that the item had a "bad association" following those murders, yet Paragon continued to charge $700 for the item. One salesman reported the jacket was frequently well-stocked in the store, even though the store knew it would probably incite trouble miles away from the cash register. Marmot decided to discontinue the line a few months ago, but Paragon made the decision to put the jackets on sale (forsaking all that markup!) after the Bryant Park shooting. Dozens of robberies and two murders weren’t enough to warrant abandoning the cash cow item, but a shooting in Bryant Park — now that is some bad PR.

Anyway, jacket aside, Corey Dunton was clearly a sociopath who was looking to stir up trouble. Days before the shooting, he posted to Facebook about bringing his "amp" (pistol) to Bryant Park. He didn’t go there to find a jacket; for all we know, his goal that day was to hasten the prison sentence that, by all indications, he lived his life determined to earn. Having gotten it, let’s hope he stays there for a while.