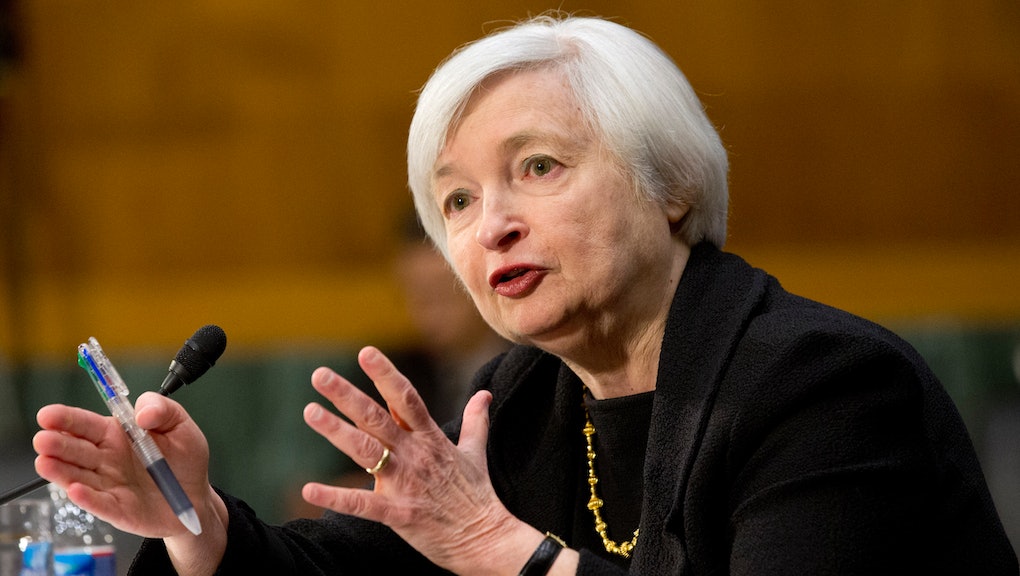 Janet Yellen, a Dove Or a Lame Duck?

We can avert the collapse of the dollar. It is happening, and sooner than you can imagine. Unless we stop it now.

After the first public appearance of Federal Reserve Vice Chair Janet Yellen last Thursday, we can confidently attest that the winds of change won't be blowing any time soon. Yellen has clearly signaled before the Senate Banking Committee that the current Fed policy will remain as is.

In case you missed the two hours of mutual adulation between lovely Janet and respected committee, this is what unfolded during the hearing: Yellen walked into the room and owned everybody after minute one. She walked out of the hearing as a money Jedi Master, demonstrating, without any reasonable doubt, why she is the chosen one to keep the Madoff charade going.

Yellen has dispelled all hope for a new and sound monetary policy. You don't need to be a rocket scientist to understand what is going on at the Fed. Money creation has gone ballistic, and it's only a matter of time until the bill is due. The following graphs illustrate this Ponzi trend:

All that would be irrelevant if economic activity had grown in line with the monetary base, i.e. 600%. But it did not and here we are, the greatest economic power that history ever produced, threatened from within. What mutual association and individual entrepreneurship provided for more than 200 years has finally begun to collapse due to this irresponsible monetary expansion. To make matters worse, the rest of the world has started to follow suit, as the following chart demonstrates.

Real inflation has not yet materialized as predicted, but this does not mean that the monetary expansion is not going to eventually translate into the predicted price increase. The fact that you don't have high temperature (yet) does not imply that you don't have the flu already. There are many reasons for this distortion, mainly that the world continues to trust the dollar. But this free lunch is not going to last forever.

After the sub-prime crisis demonstrated that safe assets can no longer be privately provided, investors are looking to public issuers to meet the demand. A recent convention held by the IMF and the Bank of Thailand had a session devoted exclusively to the problem of global safe assets, and it did nothing else but corroborate this matter. However, the supply is lopsided because the highest-graded sovereign bonds that can be considered safe aren’t expanding. As a consequence, the world keeps hoarding the good old American dollar and Treasuries. In other words, there is a real desert of alternatives.

What I'm trying to say is that the free-lunch is based on a lack of alternatives, or in other words, it is exogenous, you cannot control it anymore!

Unless you wake up and target inflation. You've got great American-born tools at your disposition, e.g. the Taylor Rule. It is in your hands to safe your economy.

The following graph illustrates how the exponential growth in asset prices began to take off in 1971:

You may think that this graph does not reflect true inflation, right? Instead, it may suggest the wealth increase from stocks and bombs … er, bonds. Well, look again. Let's put the numbers in perspective. The next graph contrasts your portfolio, denominated in fake …er, fiat money versus real money (i.e. gold and black gold):

Now, your assets exhibit a mere illusion of wealth. It is a matter of time before Main Street wakes up and realizes the losses on Wall Street. The time bomb is ticking.

And if this hasn't convinced you yet, here's the most bizarre asset profile of any central bank in the world. The Fed's new deal is the utmost discretionary and unlimited junk-buying program ever recorded in human history:

From QE1 to QE3, the Fed increased its balance sheet from $900 billion to $3.7 trillion. The main problem with these trillions is that most are junk from Freddie Mac and Fannie Mae. Here is how it works: every single month, the Fed purchases roughly $45 billion in treasuries and $40 billion in mortgage-backed securities. Since there are no reserves, they magically bake $85 billion of new money, right out of the oven, each and every month.

A market correction is bound to happen. It is impossible to know exactly when this is going to occur, but people need to understand how irresponsibly both the Senate and the current monetary authority are behaving. Yellen's dovish remarks are not helping either. In fact, after witnessing what went down last Thursday, I'd dare attest that Yellen is even more dangerous than Bernanke.

We should really ask ourselves whether we are before a dove or a lame duck.