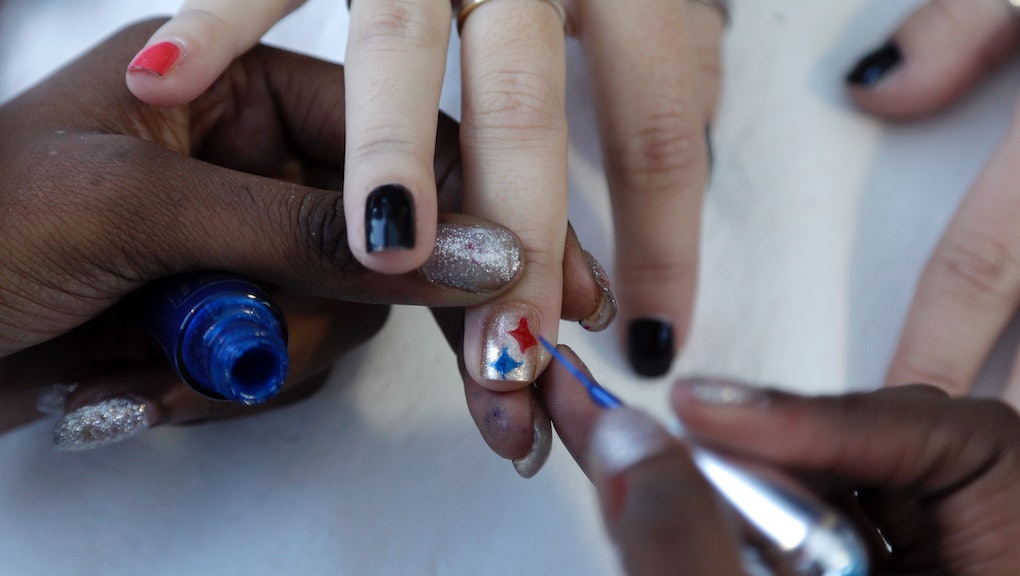 To anyone who thinks that it's okay to clip your nails on the New York City subway,

It is not okay to clip your nails on the New York City subway.

I am not the first person to make the argument that it is vile and disgusting and inhospitable and horrible to clip one's nails in public, but I feel that it needs to be reiterated after experiencing not one, not two, but three people engaging in this satanic act during the past month. It is not okay to clip your nails in public, anywhere. Not in the company of friends, not at a Starbucks (or any other place where food or beverages are served), and not really anywhere outside of your own bathroom. Think of a set of nail clippers as the most sedentary person you have ever met. And imagine that person getting stuck in the bathroom, because that is where he/she belongs.

Nail trimming should be done in a solitary environment, and unless you are a parent taking care of your child, or a person taking care of an elderly relative, there should be no exceptions to this rule.

I do not care where you come from, because once you are in New York City, you must adapt to the traits of New Yorkers. New Yorkers do not carry nail clippers with them wherever they go. They carry iPhones, wallets, keys, and occasionally cocaine.

Why would a person think that it is okay to carry a nail clipper onto the New York City subway, and then clip one's nails as if there is nothing wrong with this heinous act? Why are these Nail Clippers not more embarrassed about their misdeeds, and why do they continue to think that it is okay to remove parts of their body, and leave these body parts on the seats of subway trains across New York City?

And why has Mayor Bloomberg, who banned us from smoking cigarettes in bars and from ordering XXL sodas, not banned nail clipping in public? I would like to hear Steve Gutenberg or Alec Baldwin or Tina Fey lend their voice to a Public Service Announcement that strictly prohibits nail clipping from all MTA locations. I'd call it the No Nails Left Behind Act.

To put this in comparison, what if I decided to shave my beard with my electric trimmer while riding the subway? I am fairly certain you would be none too pleased to find my hair follicles on your seat. And what do you know? Skin, hair, and nails are all part of the same family, so why would you leave your nails behind?

And no, before you ask, brushing one's hair in public is no better than clipping one's nails, but fortunately hair brushing does not make the hideous noise that clipping one's nails makes. Therefore, if I am facing one direction, and someone is brushing his/her hair (and presumably leaving some of it behind for future MTA customers to sit in), I may not even know that they are doing it. Nail clipping is as egregious for its noise as it is for the act of leaving behind one's body parts in public.

To quote the Beastie Boys' "Open Letter To NYC:"

When you are clipping your nails in public, you are not going to make it happen. People will look at you with scorn. Subway cars will clear out and you will be sitting their alone. Yes, if you crave your own subway car, this may be one interesting method to achieve this rare feat, but let me tell you, there will always be a crazy man or woman who will not leave the car, despite the discord that you have brought upon this earth and your fellow riders.

So please, I beg of you, Seriously Disgusting Individuals (SDIs) of NYC, stop clipping your nails in public. Go to a bathroom. Clip your nails in your own residence. Don't ever take your nail clippers out of your home, because at some point, someone with less tolerance than I have may hurt you very badly. Really, this is a call to action that is meant with your own safety in mind.

PS — Please also pass this information along to your gum-smacking friends. Thank you.