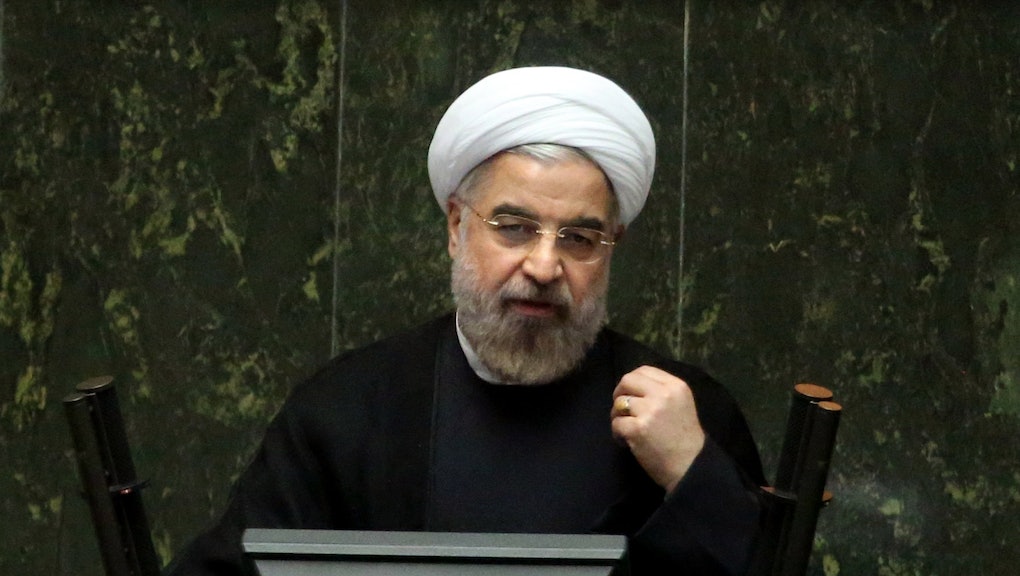 A bipartisan majority is poised to harshen sanctions on Iran with a defense authorization bill slated to appear before Congress in the upcoming weeks. Amid surprising diplomatic progress towards peace between Washington and Tehran, these sanctions could spell disaster for not only the Iranian economy, but for American security and prosperity as well. The long-standing sanctions against Iran depend on historically and logically bankrupt ideas.

In perhaps the only sincere move towards peace in his presidency, Nobel Peace Prize laureate and U.S. President Barack Obama has spoken with the new Iranian president, Hassan Rouhani, and set up diplomatic talks with the so-called "rogue" theocratic state. These "P5+1" negotiations will bring together leaders of the U.S., Iran, and several other world powers in an attempt to end sanctions and resolve the Iranian nuclear issue peacefully. While the U.S. and other Western powers have imposed devastating sanctions on Iran since the Islamic Revolution of 1979, the current talk of increasing sanctions is especially harmful and counterproductive.

Because of the rare thawing of relations between the West and the Iranian government, members of Congress must reflect seriously on the deleterious effect of increased sanctions and opt finally for peace. The argument against stiffened penalties on Iran rests on three pillars.

First, sanctions are demonstrably ineffective in changing the policies of foreign governments. Historically, the United States government has employed sanctions liberally toward foreign nations deemed hostile to American interests. Before World War I, Britain imposed stiff sanctions on Germany, and prior to the infamous sinking of the Lusitania, the United States followed suit, preventing peaceful commercial vessels from traveling to Germany.

Then in 1940, FDR imposed stiff sanctions on Japan, which had not yet harmed any Americans. In more recent history, the American government has erected sanctions against peaceful countries such as Cuba, Iraq, Myanmar, and Sudan. In all of these cases, as well as numerous other historical trade embargoes, the perceived enemy government not only failed to change its policies, but often became more oppressive and reprehensible in its actions.

Lest anyone think that the Iranian case is different, we need only to consider that the U.S. has already enforced stiff sanctions for more than three decades, yet the Iranian government remains an Islamic theocracy, presumably with the intention of developing nuclear weapons.

Second, sanctions undermine American national security. Any novice in the history of the past century will recognize that several of the aforementioned nations later became U.S. enemies in war. Embargoes against Germany led only to more belligerent policies from Berlin and a more disastrous loss of life in World War I. Perhaps the "day of infamy," when Japanese pilots attacked Pearl Harbor in 1941, was not an unpredictable attack from a belligerent nation; perhaps, this was a calculated and desperate response to the U.S. government's aggressive sanctions policy against Japan.

Sanctions against Iraq, likewise, served not to deter the tyrannical policies of Sadam Hussein's Ba'ath Party, but to foment conflict and to pave the way for war. Meanwhile, since the introduction of sanctions against Sudan in 1996, the war-torn desert nation has begun exporting violence globally — Osama bin Laden opened terrorist training camps there in the late 90's, and just this year the U.S. State Department added several more Sudanese nationals to the list of major Al Qaeda operatives.

Especially as the U.S. government continues to endorse drone strikes across the Muslim world and the Israeli occupation of Palestine, will naval ships and sanctions really help to deter terrorist and extremist activity in Iran? Regardless of the nuclear question, history suggests quite clearly that U.S.-imposed barriers to prosperity will be meet with strong resistance and sow fierce anti-Western sentiment deeply among segments of the Iranian people.

Finally, the principles underlying sanctions are simply foolish, and conservatives especially should recognize the absurdity of the claim that sanctions can prevent Iranian nuclear activity. Iran has long faced hostilities from two of the most powerful militaries on the planet in the United States and Israel. Several nearby countries, specifically Pakistan and India, have nuclear weapons. Moreover, as a Shiite nation, Iran has numerous enemies even among fellow Muslim governments. (Iran's sole ally in the Arab world has long been Bashar al-Assad in Syria, and his days are numbered.) Given the numerous dangers facing Iran on a daily basis, isn't it natural that the country would seek to obtain nuclear weapons, if only for defensive purposes?

Ironically, many conservative politicians in the U.S., including the usually liberty-loving Sen. Ted Cruz (R-Texas), are simultaneously among the strongest opponents of Iranian nuclear capabilities and the strongest supporters of domestic gun rights. The paradox here is that many pro-Second Amendment arguments depend on the notion of creating a more peaceful society through mutual deterrence: a man will not rob his neighbor if the neighbor has a gun. The Iranian government could justifiably employ this same logic in defending its nuclear ambitions, seeking not to engage in aggression, but primarily to deter countless powerful enemies.

A new era of peace between Washington and Tehran seems so close. Therefore, now more than ever before, politicians in D.C. must resist the pressures of the pro-Israel lobby and end their brutal system of sanctions against Iran. Or, at the very least, they could stop increasing the war-mongering sanctions (and rhetoric) while the U.S. and Iranian leaders meet ostensibly to promote peace.