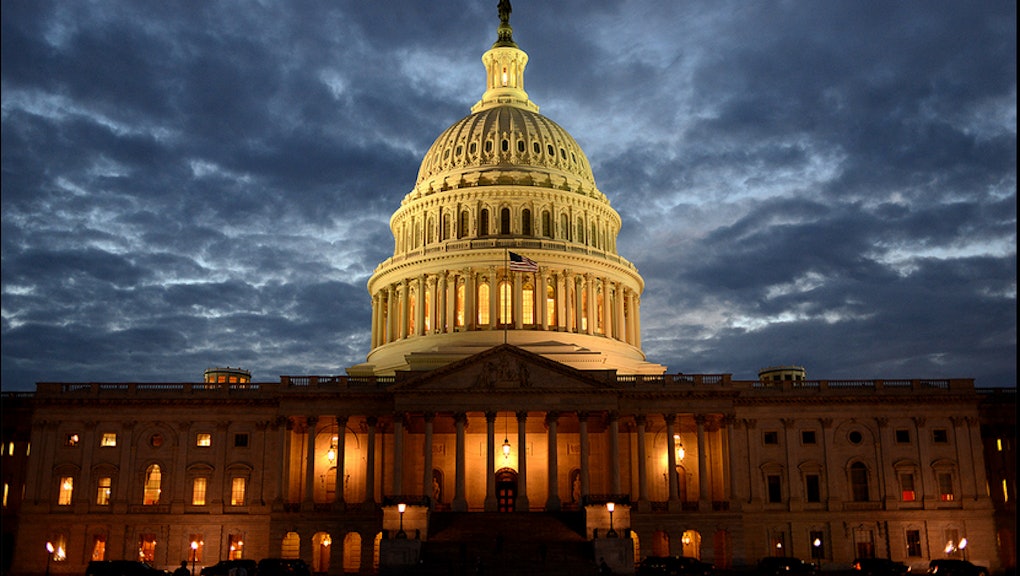 Last week, the Congressional Budget Office (CBO) released its updated Revenue and Spending Options Report, its annual publication highlighting options and new budgetary scores for the upcoming decade. The preface is nothing new: "Large budget deficits and further increases in that debt are projected to occur in coming decades under current law."

The federal deficit was 4% of GDP in Fiscal Year 2013 (the smallest since 2008) and as a result, estimates of federal debt held by the public are projected to decline by 5% of GDP by 2018 if current laws that govern taxes and spending remain generally unchanged.

However, the CBO projects budget deficits to gradually rise under current law due to increasing interest costs and increasing spending on Social Security, Medicare, Medicaid, and other health insurance subsidies.

Thankfully, there are clear, reasonable, and realistic solutions ready for implementation to combat the inevitable. All we need is some thoughtful consideration and the support of our beloved elected officials in Congress coupled with principled cooperation and consent from our President.

The CBO's 103 options for reducing the deficit for the 2014-2023 period come at a pertinent time given current budget conferences. Proceedings thus far are following a oh-so-familiar path, but there's still hope lawmakers can come together and implement cost-effective measures to ensure a more promising financial future.

Here are the CBO's 10 best recommendations:

It's still uncertain whether greenhouse gases in the atmosphere as are result of burning fossil fuels and deforestation are fueling climate change, although evidence suggests this is the case. The federal government has begun to regulate emissions but has yet to directly tax them.

The CBO suggests either placing a tax of $25 per metric ton on most emissions of greenhouse gases (increasing at an annual real rate of 2 percent,) or establishing a cap-and-trade program for the right to emit 1 metric ton of CO2. Both proposals would increase federal revenue by a projected $1.06 trillion and reduce emissions by 10% in the next decade, yet they would raise the cost of production in the short-term, ileading, potentially, to more potential outsourcing, to uncertainty for the costs of future emissions, and to a reduction of benefits to foreign countries who don't practice similar conventions.

The American Jobs Creation Act of 2004 allowed taxpayers to itemize and deduct state and local sales taxes, instead of income taxes, from their adjusted gross income.

The CBO suggests eliminating the deductibility of state and local payments, which would increase federal revenues by a projected $954 billion between 2014 and 2023. Many Americans already believe the federal government shouldn’t be subsidizing state and local governments to begin with, since deductions tend to largely benefit wealthier localities and they deter efficiency through financing services with non-deductible fees.

The Hospital Insurance (HI) payroll tax is the primary source of financing for benefits provided under Medicare Part A (hospital, nursing, hospice, and home health care.) Employees pay 1.45%, employers pay another 1.45%, and self-employed individuals typically pay 2.9%. Since 2008, expenditures for HI have exceeded the program’s revenues.

The CBO suggests increasing HI payroll taxes by 1 percentage point, resulting in a combined rate of 3.9%, yielding a revenue increase of $859 billion over the 2014-2023 period. Under current law, either a 4.0 percentage point combined rate increase or a 50% reduction in Part A spending is necessary to bridge the projected growing gap between future costs and revenue. This option would delay the exhaustion of the HI trust fund for more than a decade.

Health insurance purchased through an employer is excluded from income and payroll taxes, a favorable tax treatment that costs the federal government about $250 billion each year. These tax preferences encourage firms to offer employment-based health insurance; by pooling risks, costs of marketing, and premium collection, they’re a pretty effective way to provide coverage, even without tax preferences.

Over the past twenty years, federal Medicaid spending has risen by an average rate of 6% a year, a rate that will increase to 8% because of the optional coverage expansion authorized by the Affordable Care Act. In contrast, GDP is projected to rise by about 5% a year over the next decade.

There are a number of potential structural changes to help fix the Medicaid debacle, including reducing the scope of covered services, eliminating eligibility categories, repealing Medicaid expansion, or simply lowering the federal government’s share of total Medicaid spending.

The variation of savings is attributed to decisions on limiting spending through caps on overall spending or per enrollee, what Medicaid services are included under the caps, eligibility, base-year spending, growth factors, and unpredictable effects on states and enrollees.

The Budget Control Act of 2011 (BCA) limited defense spending to $511 billion in 2017, while the Department of Defense (DoD’s) most recent Future Years Defense Program (FYDP) called for $560 billion in 2017.

The CBO suggests reducing the size of the military so that, by 2017, the defense budget would satisfy the BCA cap for that year, commensurate with 2012 amounts. Additional force reductions from 2018 to 2021 would be necessary to remain under the cap. As a result, evenly spread cuts across the DoD’s units may result in the elimination of the following forces by 2021: 10 Army brigade combat teams; 34 major warships; two Marine regiments; and 170 Air Force fighters.

Social Security has been financed through payroll taxes on employers, employees, and the self-employed since 1937. At that time, about 92% of jobs covered by the program fell below the maximum taxable amount ($113,700 as of 2013) and were thus subject to the tax. Since the number of highest-paid workers has grown faster than that of average workers over the past decade, this percentage dropped to about 83% in 2011.

The CBO suggests increasing the taxable share of earnings from jobs covered by Social Security to 90% ($177,500) in 2014, which would increase revenues by an estimated $470 billion over 2014-2023. This could delay current exhaustion of the combined trust funds estimates until 2036, while also making the payroll tax less regressive. The increase in Social Security benefits would be modest relative to the increase in taxes.

The CBO suggests converting SNAP, SSI, and child nutrition programs into separate block grants to states (beginning in 2015), thus making make federal government spending more predictable and allowing state programs to define eligibility and administer benefits in more efficient and innovative ways. This option would cut $404 billion in mandatory federal spending, certainly eliminating benefits for some people who would have otherwise received them. Economic stabilizing effects during downturns may also be reduced.

The CBO suggests treating the Railroad Retirement Program in the same way that defined benefit pensions are treated — establishing after-tax contributions to the plan and only taxing benefits that exceed that amount, a proposal that could save $338 billion over the next decade. This would make the tax system more equitable by eliminating preferential treatment given to Social Security benefits over pension benefits while also treating elderly and nonelderly taxpayers with comparable incomes the same way. At the same time, raising taxes on these benefits would be equivalent to reducing benefits altogether — a severe drawback for lower income individuals who depend on these programs the most.

The CBO suggests gradually eliminating any tax on income replacement benefits over a five-year period, but immediately including unemployment taxes, half of all workers’ compensation taxes, and the disability benefits portion of insurance premiums, in employees’ taxable income. In addition to increasing revenues by $326 billion over the 2013-2023 period, this would spread the tax burden among all workers covered by unemployment and employer-paid disability insurance instead of placing the entire burden on beneficiaries. However, it could discourage the unemployed from accepting available work since they’ll obtain higher disposable incomes.