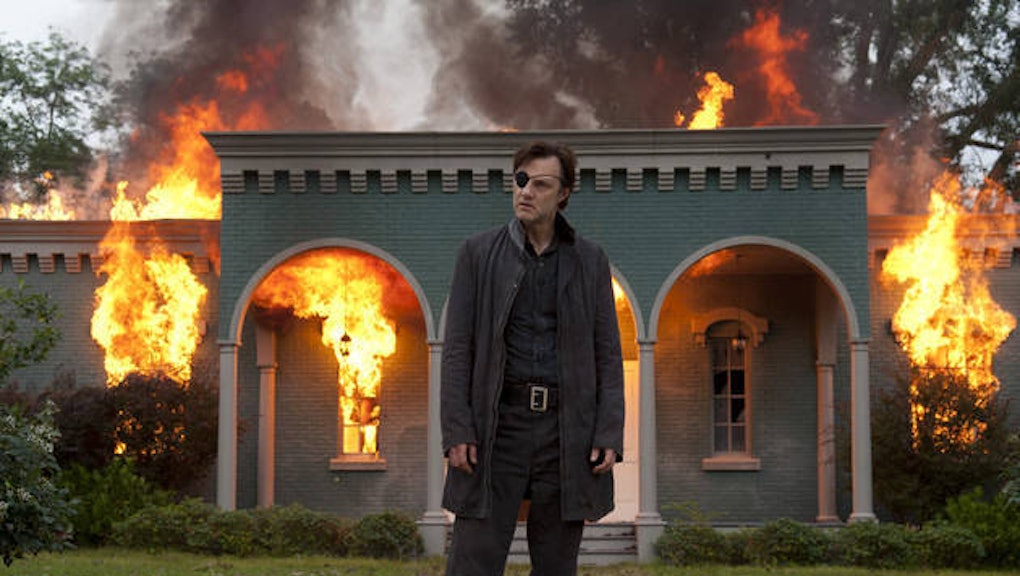 "Live Bait" is the first episode of The Walking Dead that doesn't feature any of the characters from the prison. Instead, the episode features the return of the Governor and is a completely character driven episode. The core of the episode's drama is the absence of the Governor — the question of whether or not he can return. Every character has asked themselves that question, but for Phillip Blake the answer is of the utmost importance.

Even the Governor seems to believe that. He sheds his name and becomes "Brian" and burns the image of his family. It appears that the Governor hates himself, and for good reason. In the past, the Governor has: tortured Glenn, Michonne, and Maggie; killed Milton, Andrea, and Merle; attacked the prison (twice); and massacred his own people.

The Governor's crimes against humanity are immense and absolute. Unfortunately, this level of stupendous villainy has formerly killed any realism in his character. He became a cartoonish 'bad guy' instead of a fully formed character. "Live Bait" gives the Governor more human qualities. In this episode, the Governor pulls a reverse Walter White — he blurs the lines between villain and anti-hero, possibly re-discovering his humanity.

The episode begins immediately after Season 3 ended. The Governor and his two remaining men huddle around a fire. In the distance, a Walker approaches the group and falls into the open flame. As the Walker burns, the Governor neither attempts to dispatch the Walker or flee as the Walker attempts to kill him. Realizing that their leader has given up on life, Martinez and Shumpert abandon him. The Governor begins a new life of solitude.

The Governor begins his new life by burning Woodbury to the ground. The image of him with his back to the burning town made for an effective, if unambiguous symbol. The Governor is attempting to create a new life for himself and dissociate with the crimes that he has committed. The Governor is a man that is dead inside. He has lost all meaning in his life, yet is now able to feel empathy more than he ever has before.

He reads a wall, full of messages to someone named 'Brian Harriet' and re-discovers what it means to care about others. The Governor finds someone to care about in the form of Megan, a young girl that looks enough like his daughter, Penny, to make him protective of her.

The Governor encounters a family. His interactions with them begin his supposed "re-birth." He strives to be accepted by them, and appears to have no ulterior motives as he helps them. From the onset, the Governor lies to the family, but it is a lie that he is also telling himself. He tells them that his name is Brian Harriet, too. He needs to become Brian Harriet in order to overcome the monster that is The Governor, and he needs this family to help him do that. Brian's actions are selfless and kind — from risking his own life to acquire oxygen tanks for a dying man, to kindly burying a much-loved grandfather, to taking the family under his protection as he moves on. Brian becomes a father figure to Megan and a beacon of hope for Tara and Lily. As conveyed by the featured song of the episode, "Last Pale Light in the West," the Governor has become a Lonesome Drifter instead of the vengeful psychopath that we were expecting after his failed prison assault.

Yet there remain some traces of the old psychopathic Governor in this new broken man. Brian savagely smashes the head of the family's re-animated grandfather with an oxygen tank. The Governor used to believe that some part of a person was still alive when they re-animated, Brian knows this isn't true and does what he needs to in order to protect his new family. It is the methods of Brian's dispatchment of the grandfather that make him feel like the old Governor.

As Brian and the Family flee the town, they come across a horde of Walkers on the road that forces them to flee through the woods. Brian and Megan quickly become separated from Tara and Lily and fall into one of the pits that the Governor had dug to trap Walkers while he was in charge of Woodbury. In the pit, two Walkers threaten Megan, and Brian's response is savage and instantaneous. Unarmed, he rips a Walker's throat out Road House-style and beats them both to death to protect his new pseudo-daughter.

In "Indifference," Rick tells Carol that she should seek people that don't know what she has done and try to live with them. The Governor attempts to do the same with his new adopted family, but has trouble with the re-emergence of Martinez and Company, who are going to complicate his new life as Brian.

The best episodes of The Walking Dead are always the character-driven ones. Just like last season's "Clear," "Live Bait" dealt with a man that was horribly broken and trying to be redeemed. The success of "Live Bait" is entirely due to the talents of David Morrissey and his ability to create a nuanced character out of very little dialogue.

- Shower walker was disturbing, and so was wheelchair walker. In short, the Walkers in this episode are fantastic.

- The family seems unrealistic — that outbreak has been going on for a long time. How do they not know how to kill Walkers?

- The whole "Knucks" thing is strange and doesn't pay off.

- From Andrea to Lily, there is no shortage of beautiful women for the Governor to bang in the Apocalypse. Forget blue jeans, the comb-over Plantation owner look is the fashion trend that will never die.

Be sure to watch "Dead Weight" next week, and be sure to remember that the mid-season finale is on December 6 so you will have to find something to fill that The Walking Dead void until February. If you get a burning desire to see more walkers between now and next week, you should check out The Walking Dead web series.