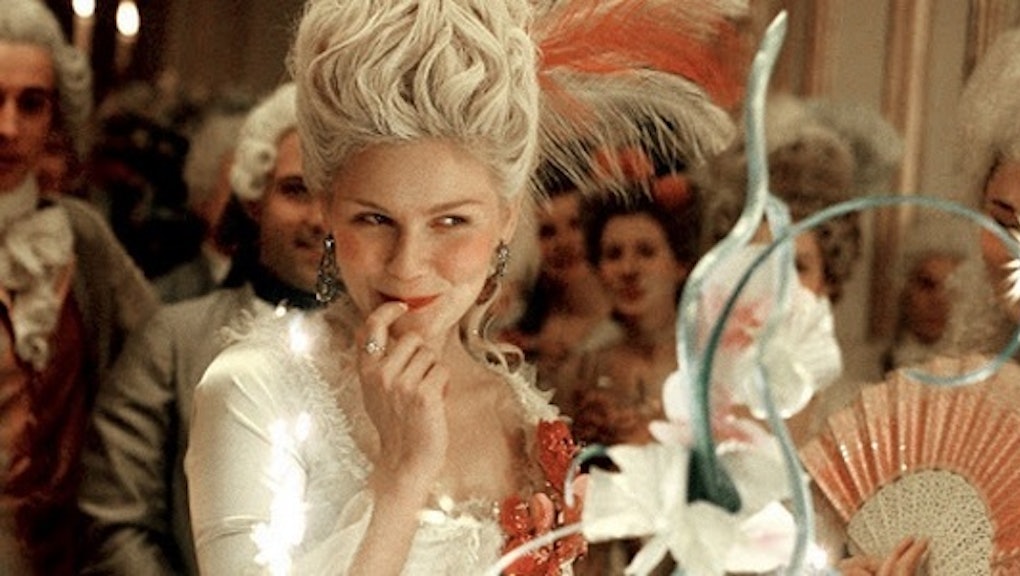 Why Millennials Are Obsessed With Marie Antoinette

In a mysterious way, she was a vanguard for our current situation, and we see in her what we pity in ourselves

Marie Antoinette's influence is omnipresent — she's our generation's guardian angel, looming over our everyday lives. It seems that every reputable bakery displays vibrant macarons in its window. At New York Fashion Week, ruffles, bows, and lace dominate spring collections with whimsical, feminine designs. In just the last decade, dozens of productions have featured Madame Déficit herself, including Sofia Coppola's orgiastic film, Stanton Welch's glorious ballet, and, most recently, David Adjmi's scandalous play at Soho Rep. But why is she so relevant now? Why have we decided to embrace the queen that history has defamed?

It's a complicated question, but as more and more artistic renditions of Marie's narrative emerge, the answer becomes increasingly simple. As millennials, we not only understand the Austrian monarch; we know her. In a mysterious way, she was a vanguard for our current situation, and we see in her what we pity in ourselves.

Novel interpretations of Marie portray her as a human being, not a monster. She is delicate, innocent, and kind when she first arrives at Versailles. As she is forced to socialize with her frenemies and handle controversy with grace, she evolves into a victim of circumstance. Whether Kirsten Dunst sits in a bathtub loathing her life or Melody Mennite shares an awkward pas de deux with a timid Louis XVI, Marie becomes a portrait of hardship, chaos, and fragility. But within her torment, there is beauty — a beauty that we all appreciate, one that has become our newest addiction.

The Marie craze is not thanks to an affinity for all things pink or angsty soundtracks. She has become a force in our world because she embodies an escape as well as an object of empathy for us. She left her home to become the Dauphine of France before she grew up, and she was afforded only a special kind of education: how to function under tremendous pressure. She had to be perfect in her every action, for, were she not, she would disappoint her family and her nation.

Though we may not have the weight of imperial France on our shoulders, we comprehend the tensions she endured during her reign. We've been raised in an environment where competition is constant, and it's never good enough to be competent. One must be the best. Here is where our universe collides with Marie's: there's no room for error when a wrong move could mean the end of an era for us — whether it be as a dancer, chef, computer scientist, or academic.

With such an inundation of stress, it is no wonder that we look to the queen of pain and suffering for solace. We all have our own problems to resolve, and sometimes it's nice to realize that we're not the only one. Mennite reflected on her role in Houston Ballet's "Marie" as the titular queen by saying, "I feel like so many people go through things that to watch another character go through something like that — it just makes you feel not alone."

But Marie is defined by much more than her regal duties: she is one of the first sex icons of the modern West, and as 21st century women are confronted by slut-shaming that directly contradicts sexual liberation, she serves as an image of someone who went through similar oppression. Gossip galore filled Marie's quotidian activities with drama. She couldn't do anything without being called a lesbian, or a prostitute. Today, we face a similar state, though we may not be judged for our extravagant wigs or affairs with gentlemanly officers, we are slandered for a skirt that's a bit too short or a steamy night after a first date. We relate to Marie because she experienced the same hypocrisy we endure: she was first called a prude because she didn't produce an heir, and was then denounced as a whore when she released her inhibitions.

But perhaps what connects us most to the Dauphine is our desire to be good in a system where we can't distinguish good from bad. Marie lived during a time of change — revolution and Enlightenment philosophy constantly threatened her own stability and altered the composition of her contemporary society. Likewise, we were born into a realm delineated by complexity. Most of us were children or adolescents during 9/11, and we watched as interactions became stricter, more removed, and more digital. We want to make a difference while preserving our culture and beliefs, but we don't know how we can manage all of the expectations of a technological, globalized world.

So why are we attracted to Marie's story? She is close to us, but she's also isolated. Whether she's onstage, on film, in a box of candy, or in the fringe on our collar, we know she's here when we need to examine ourselves through a more glamorous and less personal, immediate lens.