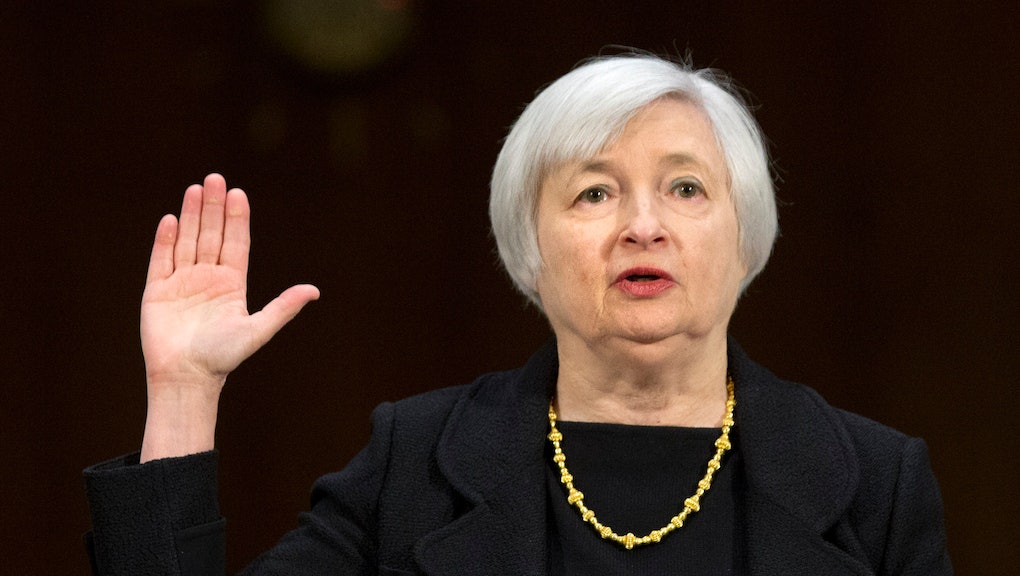 Janet Yellen and the Ongoing Myth of Fed Independence

On Thursday, Federal Reserve Vice Chair Janet Yellen faced a panel of U.S. senators, a sight that might become more familiar to her once she takes the helm of the Fed as Chairwoman. And, admittedly, it would be nice to see that someone with solid experience and academic rigor take the office.

However, Yellen's impressive resume aside, it is still worrisome that an unelected official is granted powers that rival those held by many world leaders. And what's more, the lack of a solid "checks and balances" system within the Fed threatens the thing it cherishes most: its independence.

Recently, former Fed official Andrew Huszar publicly apologized in an article for the Wall Street Journal for his pivotal role in the Fed's "Quantitative Easing" program. He characterized the program as "the greatest backdoor Wall Street bailout of all time," and "the largest financial-markets intervention by any government in world history."

So now, thanks to Huszar and his colleagues, each and every month the Fed buys $85 billion in bonds. This has added up to $4 trillion over the past five years!

And who has benefited? U.S. banks' collective stock prices have tripled since March 2009, whereas unemployment numbers remain stubbornly high, especially after adjusting for those people not looking for work anymore.

It's now clear that the Fed has only propped up Wall Street at the expense of the U.S. taxpayer.

Yet the Fed still prides itself in its independent thinking and being above the concerns of politics, but is it above the influence of Wall Street? In a word: No.

Huszar left the Fed because of what he saw as an inability to think independently from Wall Street. He states that the obsession of Fed officials now seems "to be with the newest survey of financial-market expectations or the latest in-person feedback from Wall Street's leading bankers and hedge-fund managers."

Former Fed Chairman Alan Greenspan once said that the Fed's lack of accountability is a small price to pay to avoid "putting the conduct of monetary policy under the close influence of politicians subject to short-term election cycle pressure." But what about the short-term pressure of quarterly-earnings reports from brokers and bankers?

It is one thing for private industry and markets to be independent and free from the whims of short-sighted politicians. But the Fed is ultimately a government agency, and to say that government should be "independent of politics" conveys very different implications. For government, unlike private industry, is not accountable either to stockholders or consumers. Government can only be accountable to the public and to its representatives in the legislature.

So, in a free society, why have we given up such extensive powers and handed them to a small group of unelected officials, even if they may be the best people for the job?

Yellen may indeed be the right fit. However, the Fed's QE program, which Yellen proposes to continue indefinitely, has supported the system of "too big to fail" that plunged the U.S. economy into recession in 2008. What's more, unelected officials like Yellen are able to engorge the bailout package for Wall Street at the expense of the average American.

As hopefully the public will soon discover, the Fed, far from being the indispensable solution to the economic woes of today, is in fact supporting the cause of the problem: government-backed banks.

Ultimately, the Fed's independence is not real independence at all. They just choose to whom they will be accountable, and it's not the U.S. taxpayer.