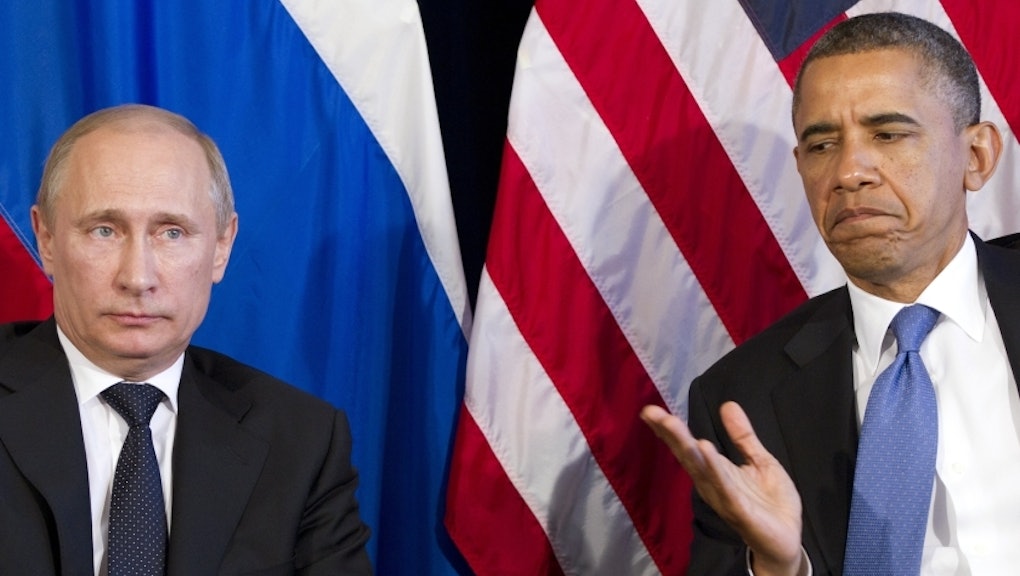 The 9 Most Awkward Political Moments Of 2013

The primary accomplishment of the government shutdown last month was hardening attitudes towards the government. The Republicans were blamed and the popularity of Sen. Ted Cruz (R-Texas) dropped faster than Anthony Weiner's political chances. Then the federal government presented Obamacare to the American public, apparently lacking any thought towards how the public might actually use it, and the Democrats took a beating.

The approval rating for Congress hits a new low every month. Meanwhile, the re-election rate hovers around 90%.

The past year provided too many hilarious moments for politicians to be taken seriously right now.

In the middle of his response to the State of the Union, Rubio's mouth apparently went dry. He reached for a bottle of water, took a quick sip, and continued speaking. His sip of water, somewhat innocuous, became a media sensation — the Left seeing evidence of Rubio's lack of prime time ability, and the Right defending this as a brief moment of what Rubio called a "funny way" of God "reminding us we're human."

The infamous sip was unexpected, absurd, and hilarious.

In response to reports of the NSA listening in on her cellphone calls, German Chancellor Angela Merkel decided to call Obama and discuss the allegations directly. While few know the details of this conversation, Merkel apparently "upbraided Obama unusually sharply," and called the action "completely unacceptable."

While the White House spun the conversation in a more lighthearted way, it could not have been a comfortable phone call.

Weiner resigned from the House of Representatives in 2011 because of a sexting scandal. He was smart enough to go underground and re-emerge in 2013 to run for the Democratic nomination in the New York City mayoral campaign.

Though he had the common sense to escape the spotlight for a while, he still could not change his habits, and his campaign derailed after new allegations surfaced. And lest we forget, Weiner's pseudonym was "Carlos Danger."

He did not make it out of the Democratic primary.

... Completely dropped the ball on Obamacare.

Because when your most important priority as president is passed during the first two years of your administration, and you have four years to plan and design how the rest of the law will take effect, why not totally screw up in the first couple of weeks?

Plagiarism can get you expelled from school, but not kicked out of Congress. Perhaps with a case of writer's block, Sen. Rand Paul (R-Ky.) plagiarized passages from Wikipedia and other sources in both articles and speeches. The awkwardness here is mostly Paul's reaction to getting caught. Generally, embarrassing political scandals wash away with some initial apologies and explanations, combined with a refusal to speak about the issue (see how Obama dealt with his association with the controversial Rev. Jeremiah Wright). But Paul seems incapable of this. Instead of disappearing from the news, he continues to make it.

... At the G20 summit in St. Petersburg, right when things were super weird between the U.S. and Russia because of the Syria crisis.

A picture is worth a thousand words, and this may be the most analyzed handshake of the year.

7. Every interaction between John Boehner and Barack Obama.

The Atlantic Wire put together a timeline of John Boehner and President Obama's (lack of) chemistry. It remains unknown if they find each other especially creepy.

Not every scandal needs to be American. The Rob Ford scandal is so awkwardly hilarious that it defies all logic. It began with public intoxication (lots and lots of public intoxication) before descending into sexual harassment, crack cocaine, death threats, public rebuke, the loss of his mayoral powers, the possibility that the province of Ontario might intervene, and now a possible court case to determine if Ford will continue to be mayor of Toronto.

This all unfolded after one video showed Ford smoking crack, and another in which he screamed, "I need fuckin' ten minutes to make sure he's dead!"

While Ford's days as mayor are likely numbered, he will not be forgotten.