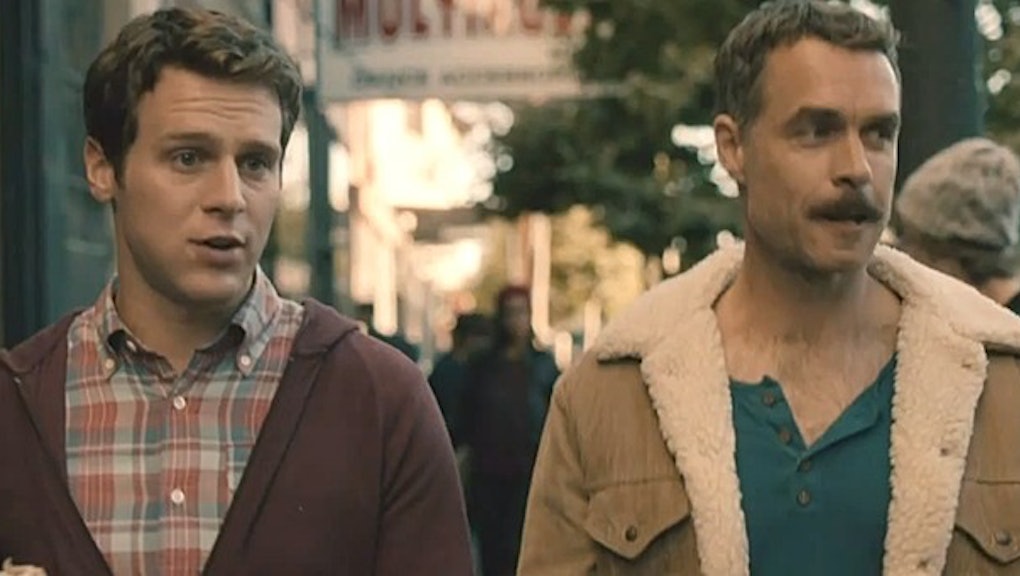 The trailer for the new HBO series Looking has premiered and people are obsessed. The show is about a group of young gay men in San Francisco. The Los Angeles Times is writing think pieces; the Huffington Post has things to say, too. Their obsession, unlike mine, is not based on a dissection of the 31-second clip to decide whether Jonathon Groff is a Carrie, a Hannah, or a Bea Arthur. Rather, it's creating an unproductive pressure on the show that suggests why so many gay shows feature unrealistic characters.

Critics have focused on the uncharacteristically pale San Francisco teased by the trailer. Gay men of color seem nowhere to be found (amirite, ladies?) among the main cast. Justin Huang at HuffPo notes that HBO's white-washed Castro, "the mecca of American gay men," is not representative of the true rainbow of skin color in San Francisco.

Similar criticism plagues another HBO series also about 20-somethings, Lena Dunham's Girls. Dunham, however, does not shoulder the burden of portraying an underrepresented minority on television, unless you count "every person I've ever met at a party" as an underrepresented minority. Given that nearly one-fifth of television viewers in 2013 admitted that TV has changed their opinion of same-sex marriage in a positive way (a simplistic assessment of support for gays, but not an ineffective one), perhaps the creators of Looking should be held to a higher standard by the LGBT community.

Unfortunately, outside political pressure on a piece of art (a comedy, no less) can compromise artistic quality. The viewers and creators of Looking have to walk a fine line between appreciating the show based on its artistic merit and valuing it only for furthering the cause of minority acceptance. Those two measures of quality are nearly indistinguishable, and whether fans can balance those criteria will determine the fate of Looking.

A better analog than Girls for Looking is another cable series about white people hounded by criticism for perpetuating stereotypes, Showtime's Queer as Folk. Groundbreaking for its subject matter, the show was a huge hit in closeted teenage boys' basements from 2000-2005. Queer as Folk faced condemnation for its superficial depiction of white gay men as promiscuous, flamboyant, drug-using party boys. Hopefully Looking will be different, and not just because I won't be watching it in my parents' basement. According to several polls, public support for gay marriage actually decreased during the original run of Queer as Folk. Support flatlined below 40% until a dramatic positive shift began in 2009, coinciding with the television debut of three gay angels known as Cam, Mitch, and Kurt.

These angels may not be Farrah, Kate, or Jaclyn, but their cultural footprint is larger than the actual footprint from the platform boots of those 70s vixens. According to the Hollywood Reporter and Ann Romney, Cam and Mitch, the gay couple on ABC's Modern Family, are some of Republicans' best friends. Modern Family was more popular with conservative Republican audiences than with liberal Democratic ones. The most dramatic increase in support for gay marriage has occurred since 2009, flipping from a slight majority opposing gay marriage to a slight majority favoring it in 2012.

A more critical look at these gay characters reveals a lack of realism; Cam, Mitch, and Kurt are much more Ozzy and Harriet than Freddie and Jason (Freddie Mercury and a boyfriend that I am dubbing 'Jason' in lieu of any actual, specific knowledge). Cam and Mitch appease Republicans — they're white, upper-middle class, and never outwardly sexual. Only the less-feminine partner works while the other is a homemaker. Their lack of sexuality became so conspicuous that the show lampooned itself in an episode entitled "The Kiss."

Even the more subversive character of Kurt on Fox's Glee, an out teen in middle America, is white and middle class. He lacked a love interest until the second season, and has rarely been involved in a storyline portraying him in a negative light. The prospect of living up to such a morally unimpeachable standard would send rational gay teens back into the closet for the chance to be a deeply flawed straight person instead. I mean DEEPLY flawed, but it might be better than trying to be saintly, asexual, and wearing an ill-advised bow tie at all times.

The stereotype of the white gay superhero continues on network television (the title of NBC's new sitcom, Sean Saves the World, is enough to send a gay teen with character flaws running for the hills). Portraying gays in a positive light and as palatable for mass consumption is more than admirable. Unfortunately, it also creates unrealistic expectations for conservative viewers and young queer viewers alike. An overtly sexual, queer character might not be easily accepted in real life, but this is television, so why not indulge the fantasy? And how many jokes can a sexless robot really land?

We can blame much of the blandness of gay TV characters on network censors, but HBO can transcend those restrictions. With more creative freedom than a primetime show, however, the pressure on Looking's creators to 'get gay right' is greater than ever. They are already ahead of most 'gay' TV shows by employing out gay actors (Jonathon Groff and Russell Tovey), an out gay showrunner (David Marshall Grant), and an out gay director (Andrew Haigh of Weekend fame).

The lack of diversity is disturbing. It's only compounded by the failure to represent the lesbian and transgender communities on the show. But setting too high a moral standard could result in another cookie-cutter series about white gay men who do everything but have sex and weaknesses. Freedom from censorship and viewership pressure gives Looking a head start on crafting both a realistic and positive LGBT portrayal. And perhaps the Girls comparisons shouldn't be seen as so damning. Ms. Dunham has created a flawed show, yes, but a flawed show with critical plaudits for its realism and healthy debates about issues addressed and ignored by the show. For Looking, perhaps that's really all we can ask for. And for Christ's sake, let's hope it's funny.