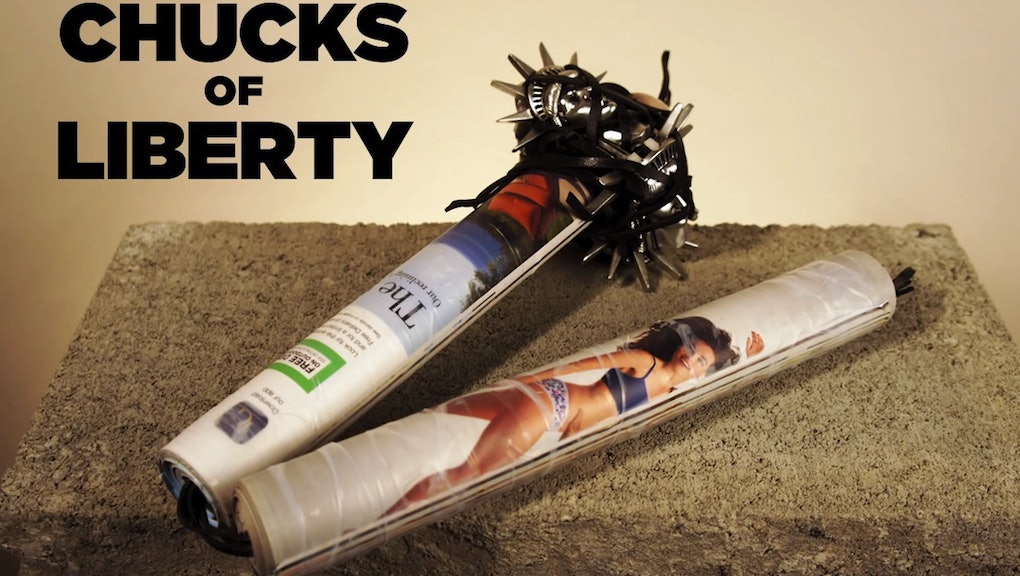 In airport security theater’s latest dazzling production, software developer and “independent security researcher” Evan Booth has crafted a wide variety of weapons from materials that can be purchased from stores beyond airports’ security checkpoints. These terrifying devices will make you shake in your boots — provided you haven’t already had to take said boots off for screening purposes.

Wonder at the fragguccino, a stainless-steel coffee tumbler that’s transformed into a fragmentation grenade in mere minutes!

Wince as a coconut is rendered into shards by the tchotchke-spiked ‘Chucks of Liberty!

Gasp, as the spines of an umbrella are transformed into the needle-like projectiles of the Cerrsberr!

Booth’s project, Terminal Cornucopia, demonstrates his mastery over explosives and large fruits alike, and shows the flaws inherent in our airport security apparatus. While airport security theater is an astonishing spectacle that has something to offer for travelers of all ages — from radioactive genital scanners, to widespread theft, to wheelchair searches that make a trip to Disney World seem like unrelenting punishment — it’s also, as cryptographer and security expert Bruce Schneier famously pointed out, all for show.

The quotidian elements of airport security aren’t effective means of preventing terrorist attacks so much as they are an elaborate burlesque designed to hassle, and thereby reassure, travelers. Identification checks, X-ray scans, carry-on restrictions, and pat downs are merely a multi-billion dollar system of smoke and mirrors that’s somehow supposed to make you feel better. After all, as Booth proves, there are plenty of deadly devices available for purchase right at Hudson News.

Booth’s clever inventions teach us two things. First, that Scotch tape and dental floss are surprisingly durable tools that have a wide variety of applications in weapons manufacturing. Second, and more importantly, that we ought to reevaluate our priorities when it comes to transportation security.

Rather than celebrating the fact that people over the age of 75 are permitted to wear light jackets through screening (“You’ve been alive for over seven decades! I hope this makes it all worth it!”), or our newfound ability to clip our nails on long-haul flights, or alienating the foreigners who cared enough to visit our country in the first place, we should be developing evidence-based security techniques that minimize duress, and only reassure people insofar as they should actually feel reassured.

After all, while it may be politically popular, unquestioning support of the Transportation Security Administration is likely to leave us all hopping around barefoot as we’re hit in the face with a Red Bull can full of quarters — both metaphorically, and now, literally.